Nineteen years since Beverly Hills 90210 left the air, the 1990s teen drama is getting a very meta revival on Fox. BH90210, which aired for 10 years and 292 episodes, stars the original cast (minus Luke Perry, who died March 4), playing somewhat fictionalized versions of themselves in a storyline that follows the efforts to reunite them for a new version of the show. Two of the returnees are Jewish actors in interfaith marriages: Tori Spelling is married to Dean McDermott and Ian Ziering’s wife is Erin Ludwig. Gabrielle Carteris is from an interfaith family. Her father is Greek and her mother is Jewish.

The series’ six-episode run begins August 7, and Ziering will be back in shark-fighting action in the Syfy movie Zombie Tidal Wave, premiering August 17.

The CBS All Access streaming service is heating up the summer with a juicy limited series called Why Women Kill, about marriage, infidelity and murder. From creator Marc Cherry (Desperate Housewives, Devious Maids), the series focuses on three couples—one of them interfaith, a Jewish screenwriter and his African-American lawyer wife—who occupy the same Pasadena, CA, house at three different times: 1963, 1984 and the present day. Each of the women learns her husband has been unfaithful, and someone dies as a result, but the wives are not necessarily the murderers and the husbands may not be the victims.

“I feel like I’m being given an opportunity to go to places emotionally and psychologically that I’ve never been pushed before,” says Ginnifer Goodwin, who plays ’60s perfect housewife Beth Ann. “It’s a show that I would binge watch, which is why I wanted to be on it.” The daughter of a Jewish mother and Unitarian father who was brought up with both faiths, she now considers herself Jewish. Married to her Once Upon a Time co-star Josh Dallas, she’s the mother of two boys, ages 3 and 5. “They’re at the most delicious stages,” she says. “They make me belly laugh every day.”

Anne Hathaway is expecting a little sibling for her 3-year-old son Jonathan. The Oscar winner, who’ll next be seen in Amazon’s anthology series Modern Love in October, married Jewish actor Adam Schulman in September 2012. She revealed her struggles with infertility on Instagram, posting, “For everyone going through infertility and conception hell, please know it was not a straight line to either of my pregnancies. Sending you extra love.”

Chelsea Clinton became a mom for the third time when she gave birth to son Jasper Clinton Mezvinsky on July 22. Married in an interfaith ceremony in 2010, Clinton and her Jewish husband Marc Mezvinsky were already parents to Charlotte, 4, and Aidan, 3. “Hillary and I are overjoyed to meet our new grandson, Jasper,” former President Bill Clinton tweeted.

Tiffany Haddish is having a busy August. On August 9, she stars in The Kitchen with Elizabeth Moss and Melissa McCarthy as mobsters’ wives who become gangsters themselves when their husbands are sent to prison. Also heard in the voice cast of The Angry Birds Movie 2 (August 2), Haddish personally chose the female comedians she’s showcasing in Tiffany Haddish Presents: They Ready, a six-episode Netflix series premiering August 13. Haddish, whose father was an Ethiopian Jew, will be the host of ABC’s rebooted classic Kids Say the Darndest Things, which premieres on October 6. 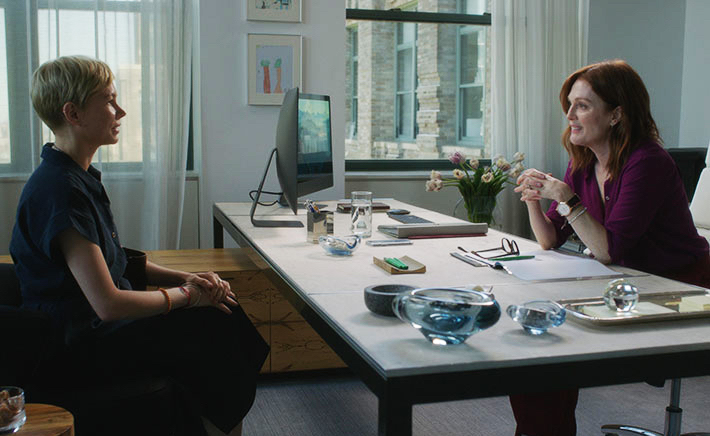 Writer-director Bart Freundlich and his actress wife Julianne Moore have joined forces for After the Wedding, a compelling new drama opening in limited release August 9. In the movie, Moore plays a multimillionaire who agrees to rescue a struggling orphanage in India with a major donation. But the woman who runs it (Michelle Williams) discovers the funds come with strings attached as secrets are revealed and relationships become very complicated. The interfaith couple—he’s Jewish, she is not—first worked together on The Myth of Fingerprints in 1997, and have been married since 2003.

On August 9, Alison Brie returns for the third season of Netflix’s Glow, which is set in Vegas but did not shoot there. “It doesn’t look enough like the ’80s” Brie explains. She recently shot horror thriller Rental, which was written and directed by her husband Dave Franco and will be released next year. Both are from interfaith families with Jewish mothers.