Emmy’s Hanukkah at the White House 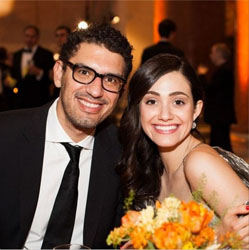 Shameless star Emmy Rossum is the product of an interfaith marriage, but since her Jewish mother separated from her Protestant father before she was born and she had little contact with him, she was raised exclusively Jewish. Her ex-husband was Jewish and she has dated Jewish and not Jewish men. Her current boyfriend, writer-director Sam Esmail, who directed her in the movie Comet, is Muslim. The couple went to the Hanukkah celebration at the White House this year at the invitation of the President and First Lady. “It was amazing,” she says. “We got a certificate saying we were there, but I’m still waiting for my picture with Mr. and Mrs. Obama to be sent to me. No selfies were allowed.”

For Rossum, who isn’t especially religious, it isn’t an issue to date someone who isn’t Jewish like Esmail. But she does concede, “It’s important to my mother.”

Breaking Bad Gets a Spinoff 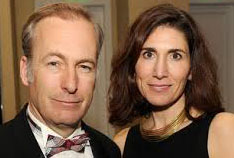 On the Breaking Bad spinoff Better Call Saul!, which premieres February 8 on AMC, Bob Odenkirk reprises his role as lawyer Jimmy McGill, who invents the persona of Jewish attorney Saul Goodman in the six-years-earlier prequel. Odenkirk is of Irish-German heritage and was raised Catholic, but he has been married to Naomi Yomtov, who is Jewish, since 1997, and raised their two kids Jewish. His son and daughter attended school at the Reform synagogue Temple Israel of Hollywood and were b’nai mitzvah, “which I found to be deeply meaningful and moving—more than I ever imagined,” he has said. While Odenkirk did not convert and finds that “It’s a little hard for me to connect to the ritual aspects,” he enjoys celebrating Passover and Hanukkah with his family and loves “the energy and community” found in synagogue. “It’s a connection to the ancient principles and beliefs that hold a lot of truth to us now.” 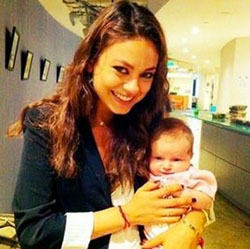 In her first movie release since the birth of her daughter Wyatt four months ago, Jewish actress Mila Kunis plays a housecleaner who discovers she’s royalty from another planet in the sci-fi action flick Jupiter Ascending, also starring Channing Tatum and Eddie Redmayne and opening February 6. But Mila is still mum on the topic of a wedding to her real-life leading man Ashton Kutcher, interfaith or otherwise. No word on whether Wyatt will be raised Jewish, but one thing is certain: Kunis is smitten with the baby. She told Ellen DeGeneres, “The truest meaning of unconditional love is my child. I thought I loved Ashton, I thought I loved my parents, my dogs. I was like, ‘I know love.’ It’s such a different aspect, though. It’s not like it’s greater or lesser, it’s just in a whole other field.” 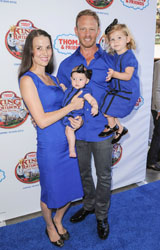 He got the axe from Donald Trump on The Celebrity Apprentice, but Ian Ziering has no regrets about participating in the show, and says he learned a lot from the experience.

“I’m not necessarily a fan of reality programming,” he says. “Dancing with the Stars was an opportunity for me to learn a skill, to do something I’ve never done before, to challenge myself. Celebrity Apprentice was like getting an expedited MBA from Trump University; an opportunity to win a lot of money for a charity that I’m very passionate about. So it wasn’t about ego. This was an opportunity for me to do good things for other people,” he explains. Now working on the third TV movie in the Sharknado series for Syfy, he’s “very excited about what the future holds.”

A big part of that future is family: his wife Erin and his two daughters. Mia will turn 4 and Penna will turn 2 on April 25, their shared birthday. Ziering, whose father was a Hebrew School teacher, was raised Jewish, and was a bar mitzvah. He married Erin, who is not Jewish, under a chuppah in May 2010. “She grew up on a Christmas tree farm,” he says of his wife, and notes that their interfaith relationship was never a problem between them.

“I’m a spiritual person, not necessarily a religious person, but I believe that different religions are different paths to the same place,” Ziering says. “God sings loudest to me through Mother Nature.” He and Erin are raising their daughters with both Jewish and Christian traditions. “We light the Christmas tree and the Hanukkah candles.”