Wreaths and Crowns, Christmas and Hanukkah

Beverly and I have been friends for more than 30 years. We met when our now 45 year old children were in the 5th grade together. Compatibility was easy for us since we had grown up not far from one another in the Bronx, NY, and now found ourselves on the same street in Brookline, MA. Her son Jeff and my daughter, Carole, went to Sunday school together as well. He would come over during Hanukkah and make latkes for her!

Beverly and I indulged ourselves in the fantasy that they would one day get married. Although they have remained friends over the years, that never happened; they each went their separate ways and married partners they met in college. Carole married a young man of Irish Catholic background and Jeff married an African American Protestant. Beverly’s 3 other children also “married out” as did my two sons. 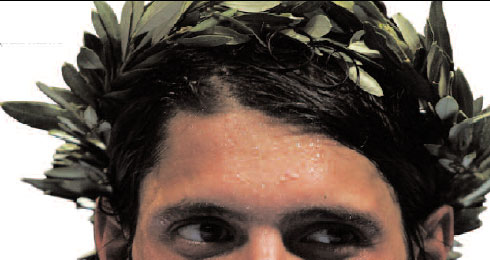 The crown, the wreath, a shared history.

The other night, Beverly and I had dessert and tea at her house and she showed me a catalogue from which she was going to buy “holiday gifts” for her kids, to send to their out of state homes. She opened to a page of elaborate Christmas wreaths from which she planned to choose.

I was a bit surprised, but, since she’d asked for my opinion, I gave it. I said that since all the wreaths were so glitzy and “Christmassy,” the only one that appealed to me was the one made of bay leaves, without any additional ribbons and tchatchkes (ornaments). It was also, I commented, more like the Greek victory crowns with which Judah and the Macabees decorated the front of the Temple when they rededicated it after re-conquering it in 164 B.C.E — part of the Hanukkah narrative. By hanging that kind of wreath, her grown children could re-connect with their Jewish roots. Beverly was surprised at this information and so I elaborated.

The First Book of Macabees tells us that when Judah and his men rededicated the Temple, they “decked the front of the Temple with crowns of gold and small shields.” Crowns in that period were wreaths.

Hellenization had been going on for well over a century, and the Jews had acquired a Hellenistic veneer in clothing and furniture, so it is not surprising that when the Macabees reclaimed the Temple they decorated it with golden “victory crowns”.

Wreaths as decoration appear on the synagogue ceiling tiles of Dura Europus, a 2000 year old synagogue discovered in Syria, and were carved into the second century synagogue at Capernaum. Jewish use of wreaths was so common that in the 4th century C.E., Ephrem the Syrian, an early church leader, issued a warning to Christians to avoid the use of wreaths, since it “is the custom of Greeks and Jews”.

Jews continued to use the crown as a symbol, but as fashions changed, the crown associated with Jewish decoration and celebration became a more modern hat-like crown. Early on in the symbolic usage of the victory crown, the Jews reinterpreted it into a symbol signifying the majesty and dignity of the Law and began embellishing Torah scrolls with crowns.

Rabbi Simeon ben Yohar said, “There are three crowns: the crown of learning, the crown of priesthood, and the crown of royalty; but the crown of a good name excels them all” (Pirkei Avot (“Ethics of the Fathers” IV,17).

So, as I told my friend Beverly, buy your children the holiday wreaths/crowns, but also fill them in on some history. You might also want to add the recipe for the Hanukkah treat we have all enjoyed together to the gift:

Fried foods for Hanukkah are said to be popular because cooking with oil is reminiscent of the Hanukkah “miracle,” when the oil used to rekindle the Temple lights lasted for eight days rather than only one. With help from friends and family, I have made latkes in huge quantities for Hanukkah parties over the years. The recipe below is “family size.”

Wash the potatoes (my favorites are “Yukon Gold”) and remove any spots or blemishes. It is not necessary to peel the potatoes. Grate them, using the coarsest side of the grater. I prefer the stringy potatoe texture produced by a manual grater rather than the “puree” of an electric one.

Allow the grated potatoes to sit for 10 minutes, and then turn them into a colander, pressing out the accumulated liquid.

While the potatoes are resting and draining, fry the chopped onions in enough salad oil to just cover the bottom of a skillet.

Combine the drained potatoes and fried onions in a large mixing bowl. Add the beaten eggs and the dry ingredients. Mix thoroughly. More liquid will continue to form, but do not pour it off; occasionally stir the mixture as you remove spoonfuls for frying.

Drop the batter by tablespoonfuls into a large skillet containing about ¼” of hot salad oil. Flatten with a slotted metal pancake turner. When the edges of the latkes become brown, turn and brown the other sides.

Drain on paper towels and then keep warm in a low (185 degree) oven until all of the latkes are ready.

Serve with applesauce (home-made or store-bought) and/or sour cream. Enjoy!

Mae Rockland Tupa is an artist and author. Her books include The Jewish Yellow Pages, A Directory of Goods & Services (1976) and The New Work of Our Hands, Contemporary Jewish Needlework and Quilts (1994). When not in the kitchen making chicken soup, she can be found in her studios in Brookline, Mass., or Castellon, Spain.