Like clockwork, fall arrives in New England each year, bringing with it beautiful foliage, a dramatic drop in temperature and humidity, and of course, the Jewish High Holy Days. Without fail (thankfully!), Rosh Hashanah and Yom Kippur sneak up on the unsuspecting, bringing with them hours in synagogue, apples and honey, and the unblemished promise of a new year.

For three authors, this time is inspiration not just to ask forgiveness for slights both committed and not, but also to write a children’s book about the season. Susan Schnur and Anna Schnur-Fishman’s Tashlich at Turtle Rock leads the trio, both in the chronological order of observance and in quality; soon after Tashlich comes Rosh Hashanah, which Sylvia A. Rouss’s Sammy Spider’s First Rosh Hashanah ably represents;

and the season closes with the Day of Atonement, Yom Kippur, which is the subject of Jacqueline Jules’ The Hardest Word. All three are beautifully illustrated, but vary greatly in how they treat their subject matter.

Tashlich is, as is written in the back of Tashlich at Turtle Rock, a ceremony that occurs on Rosh Hashanah in which people toss things into moving bodies of water to represent ridding themselves of the sins of the past year. However, this explanation comes at the end of the book, after the story; by assuming that the reader knows what the word and its accompanying rituals mean, Rabbi Schnur and her daughter unfortunately make the book somewhat less accessible to readers without that base. Beyond that assumption, though, the story is an excellent first-person narrative of a girl who leads her nuclear family — mom, dad, and younger brother — on a four-stop tashlich walk. At each location, the family draws, stamps, tosses, or eats, each time declaring something personal about either the past year or the coming one.

Perhaps best-suited for readers older than six, who might be better able to understand the rituals, Tashlich at Turtle Rock is nonetheless a well-told, coherent story that demonstrates the cultural Judaism so important to families whose children aren’t yet able — or willing — to sit through the long services at temple. The beautiful illustrations from Alex Steele-Morgan perfectly complement this tale.

Along the same line of familial Judaism is Sammy Spider’s First Rosh Hashanah, 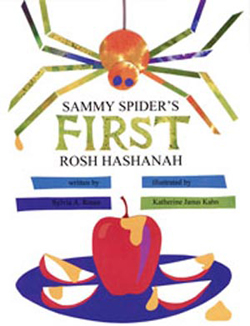 which uses two families (one set two-legged and one set eight-legged) to tell the reader the basics of the Jewish New Year. Not only does Rouss define Rosh Hashanah before the story begins, she also takes care to use the question-and-answer dialogue between Sammy Spider and his mother to educate without simply stating facts. This works as a narrative tool, and makes for a strong book for children of most ages — although I have a few minor quibbles with it.

First, Sammy Spider spends the book inquiring about the rituals of Rosh Hashanah being practiced by the human family in whose home the Spiders are squatting, from dipping apples in honey to receiving greeting cards to attending services. Each time he learns a new practice from his mother (clearly this is important cultural knowledge passed from generation to generation of spiders), he asks if they too can participate; each time, he is rebuffed with the words, “Silly Sammy, spiders don’t X; spiders spin webs.” Although true, this rejection may prove frustrating for some younger readers; frankly, I got to wondering myself why spiders couldn’t make challah.

Second — and maybe this is just a personal bias — spiders are frightening for many people, no matter how tie-dyed the arachnids of illustrator Katherine Janus Kahn may be. To think about these eight-legged creepy-crawlies living in your house, observing your movements — with intelligence and awareness! — and even invading your food is more than I’d like to contemplate. I’m told Sammy is very popular with children, so feel free to ignore my squeamishness.

And finally, the entire book — 28 colorful pages of it — is a setup for a terrible, horrible, no-good, very bad pun. If puns are the lowest form of humor (I think they’re second to slapstick, but what do I know?), then an entire children’s book that guides you toward a bad one is just plain evil. But if you can handle — or even enjoy — bad puns, spiders, and continual dismissal, then you and your child may enjoy Sammy’s adorable Rosh Hashanah adventures.

The third tale, The Hardest Word, is billed on the cover as “A Yom Kippur Story.” I am more inclined to describe it as “The product of a Yom Kippur hallucination brought on by fasting.” 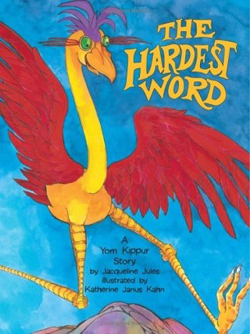 The humorous tale — also wonderfully illustrated by Katherine Janus Kahn — describes a time when “the world had many large and fabulous creatures,” such as unicorns, mammoths, and dragons. Based on the illustrations, this time was roughly the Middle Ages, except with electric lamps and metal folding beach chairs. Suspending disbelief, we are sent on a flight of fancy with a peculiar creature called the Ziz, who appears to be a cross between an ostrich, a phoenix, and Elton John.

The Ziz, who is capable of human thought and emotions, is also able to fly so high that it can send a star crashing down to earth, creating a crater large enough for a pond — which it then creates by filling the crater with a cloud. Predictably, the Ziz — being a large, awkward, bird-like creature — soon gets into more trouble than it can handle; less expectedly, the beast’s response is to fly to Mount Sinai and speak directly to G-d, who tells the Ziz to seek out “the hardest word.”

Since this is a tale about Yom Kippur (which is defined before the story, as is Mount Sinai), you may be able to guess what the hardest word is; if not, I’ll leave it as a surprise for you. That said, the words “Yom Kippur” are only mentioned in the closing pages; the remainder of the book leads up to this conclusion, with scarcely a mention of anything religious. In the end, the Ziz stumbles upon the hardest word, then shares with the children a feast from his very own vegetable garden. The story’s cute, but as I said, it reads like a child’s fever dream.

All three of these tales convey the wonder of the Jewish High Holy Days, using various mediums that differ in their age-appropriateness. For a younger child with no arachnophobia, Sammy Spider’s First Rosh Hashanah is a great story that introduces the rituals of the holiday; for a slightly older one, The Hardest Word is a fantastic (literally) tale about righting wrongs; and for one still older than that, Tashlich at Turtle Rock shows how time with family — and personal introspection — can be as meaningful as synagogue during these important holidays. Whichever is right for you and your child, you’re both in for a fun story and a visual delight.

Josh Bob is the founder and CEO of Textaurant, which is changing the way that restaurant patrons wait for a table. He has previously been a freelance writer, publishing articles in print and online, and having his advertising copy featured in print, online, radio and television. Josh has a bachelor’s from Brandeis University and an MBA from Babson College.

Fasting on Yom Kippur: All You Need To Know