Gang, summer is coming to an end! We need to embrace all of its delights as much as we can, including swimming and eating as much ice cream as possible, because that’s what summer’s about, right (but also yogurt chicken wings!)? I think we should also embrace the later Shabbat start times, and one of my favorite ways to do this is by hosting a “Sha-barbecue”! The first time I enjoyed a Sha-barbecue was almost 10 years ago when I was living in Chicago. I was invited over to my friend Taron’s place for Shabbat dinner. When I asked him what I could bring, he casually said, “Well, it’s a Sha-barbecue, so maybe some guacamole and chips?” I loved how casually he said Sha-barbecue, like it was a thing everyone knew about the world over. But never in my whole Jewish life had I heard of or attended a Sha-barbecue! Ever since that fateful night, I have fully embraced the Sha-barbecue. With Shabbat not starting until almost 8 in the summer, I’ve found that as a religiously observant Jew it’s easy to have friends over and enjoy some adult beverages while barbecuing up the main course and then sitting down to a lovely Sha-barbecue meal. You know, like our forefathers and mothers used to do!

1. Wash and dry the chicken wings, making sure they are free of any feathers. Next, separate drumettes from wingettes by slicing a sharp knife through the joints.

3. In a separate, larger bowl, add all the ingredients for the marinade. Stir to combine, tasting for adjustments in seasoning.

4. Once marinade is complete, place the prepared chicken wings into the marinade bowl, 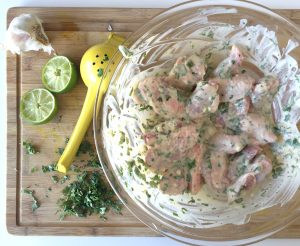 stirring to coat. Cover with plastic wrap and marinate for at least 1 hour and up to 6 hours, making sure not to over-marinate, as the recipe includes lime juice, which can break down the meat (and not in a good way).

6. Using tongs, gently place the wings on the prepared baking sheets, making sure to spread them evenly so they aren’t overlapping. Don’t toss out the remaining marinade, as you will be basting while it bakes.

7. Bake wings for roughly 20 minutes. After the initial 20 minutes, baste each wing with remaining marinade. Bake for another 20-25 minutes, or until cooked through.

8. Sprinkle cooked wings with Maldon sea salt and a squeeze of lime just before serving.

Whitney Fisch received her Master's Degree in Social Work from the University of Michigan and is currently working as The Director of Counseling at Milken Community Schools' Upper School Campus in Los Angeles, CA. When not dealing with the trials and tribulations of roughly 600 high schoolers, she is at home dealing with the trials and tribulations of her preschooler and 6-month-old baby as well as cooking... a lot. She blogs about all things food and life on her blog, Jewhungry was a Top 5 finalist in The Kitchn's Homie Awards for Best Health & Diet blog in 2014 and also co-authored a Passover e-cookbook that same year with fellow Jewish food bloggers, Amy Kritzer, Sarah Lasry and Liz Reuven called, "4 Bloggers Dish: Passover - Modern Twists on Traditional Recipes." You can follow Whitney's adventures in parenting and life on her blog as well as in other media outlets such as The Huffington Post, Kveller.com and The Times of Israel, all of which Whitney is a contributor for.Instagram: @jewhungryFacebook: www.facebook.com/JewhungryTwitter: @jewhungryBlog: www.jewhungrytheblog.com