To Tree or Not To Tree 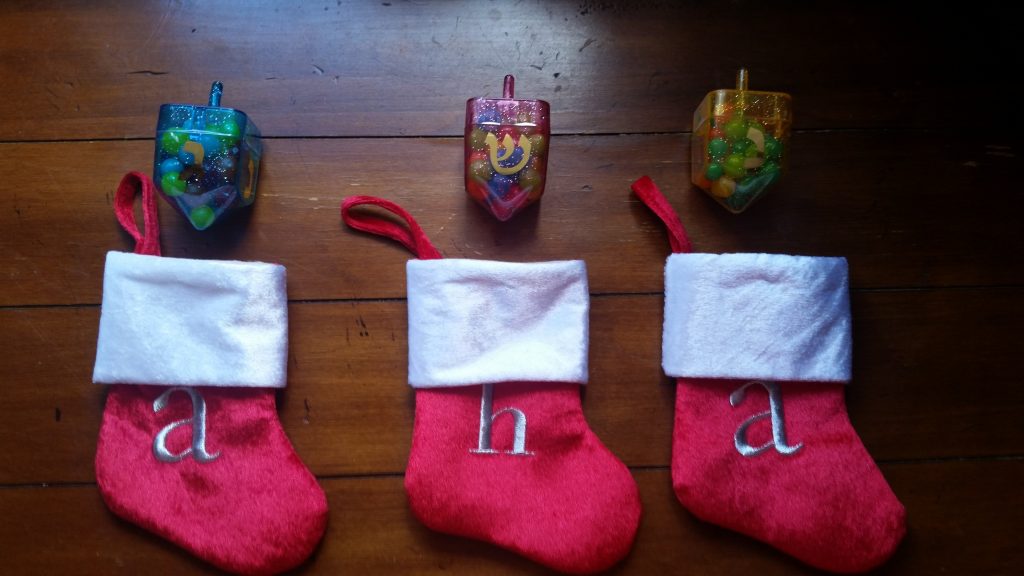 The dual holiday extravaganza this season is more work than I thought it would be. But, it’s important for me to keep the traditions from both my own family and Adrian’s family in order for our daughter Helen to grow up understanding and respecting her two faiths: Jewish on my side and Mexican Catholic on Adrian’s side. Also, Helen is 14 months old now and this Hanukkah/Christmas is really starting to come alive. This year both holidays fall on the same day! It feels like Moses and Jesus are somewhere eating latkes and drinking eggnog together.

From the beginning of my organization of the holidays, decorations were the first thing on my list. As far as decorations go, the question on my family’s minds was, “To tree or not to tree?” I’ve wanted a Christmas tree since I was a little girl in Hebrew school. When I was 12 I bought a plastic one from Rite Aid and hid it in the garage. I decorated it with colored balls and candy canes and I would go out into the garage to stare at it. But this year because of our interfaith family, and our new traditions that include our old traditions combined into one big tradition, I was curious to know if Adrian wanted a tree.

At first he did. We set a date to go look for one. But, after a few days he decided against it. We are being quite thrifty right now and he decided we didn’t need to spend money on a tree. “Next year,” he said. But, what he doesn’t know is that on Saturday when he goes to work at the restaurant at night, Helen and I will sneak out to buy a tree. It will be cheaper then because Saturday is Christmas eve so the tree people are looking to sell the rest of what they have for a lower price. I can’t wait to see Adrian’s face when he walks in and sees the tree. This might be a new tradition I’ve invented. Maybe every year Helen and I will sneak out to surprise her Papi! And of course, my 12-year-old self really wants that tree too.

I raided the aisles at Amazing Savings last week. I bought something called “Hanukah Tinsel.” Who knew something like this even existed! It’s tinsel but it’s blue and white with dreidels hanging off of it. Then I bought stockings with our family’s initials and filled them with Hanukkah gelt. Usually Hanukkah gelt is money, but I filled them with big plastic dreidels that have jelly beans inside. That’s my idea of Hanukkah gelt. Our apartment looks like the beginning of a crazy bat mitzvah/quinciñera/Christmas/Hanukkah party. Obviously, I’m more excited about this than anyone else in my family.

Our gift bags are also outrageous. We have gifts from Santa, Mami, Papi and Grandma. Then we have Hanukkah gifts. There’s one bag with Santa on it and he’s looking at another gift bag with a menorah on it, almost as if he’s remarking to himself “Now that’s a great idea to light my sleigh.” In my mind I see Santa climbing down chimneys holding a menorah and having a plate of latkes by the tree. In our Brooklyn apartment Santa has to come through the fire escape. But, he’ll get here somehow. I just hope no one calls the cops on him. 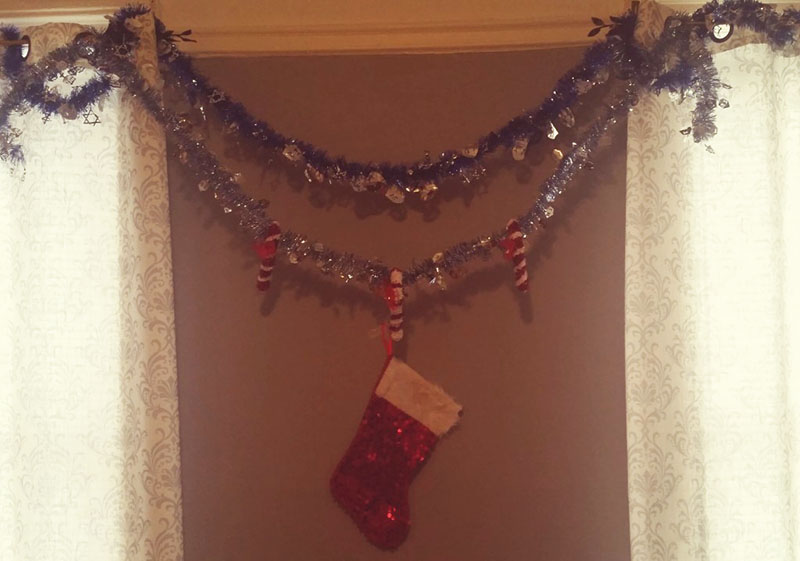 Today when Adrian goes to work Helen and I have to start shopping for the food on our Hanukkah/Christmas menu. In Mexico, a tradition on Christmas is a drink called “Ponche.” This is like a warm fruit punch that can be made with or without alcohol. Adrian likes it without alcohol. It has Mexican fruits, apples, raisins and sugar cane in it. Helen and I will go to the Mexican markets in the Sunset Park neighborhood in Brooklyn and look around for these fruits and ingredients. We also need a bag of jalapeño and serrano chili peppers. Then we might make tamales or another traditional dish called “Pipian Verde” which is a pumpkin seed sauce.

For Hanukkah I always make plain potato latkes and zucchini latkes. And of course I have to make applesauce to go with it! In my family when I was growing up, Hanukkah was never one of the biggest holidays that we celebrated. But now that Adrian and I have Helen, I think it will become a bigger holiday than it was for me. I’m grateful that our two holidays coincided this year. To me it is a symbol that the world is changing and we are united even in our differences. I know that the holidays coinciding have to do with the 13 months of the Jewish calendar, but nevertheless I take it as my own personal and familial symbol.

Our apartment looks bright and festive. Also, this year I learned to knit and everyone is getting a Hanukkah/Christmas scarf! And there’s just one more thing I forgot to mention. In light of us trying to save money this holiday, I made homemade ornaments both as gifts and for our tree that we have yet to buy. They aren’t finished yet but they are in the shapes of elephants, reindeer, dreidels, menorahs, candy canes and of course, hearts. One special ornament is a circle with Helen’s hand print in it. That one symbolizes our two faiths as a circle, a meeting point, a never-ending sphere of understanding, communication and love. Two faiths, two holidays, one meeting point, one love. 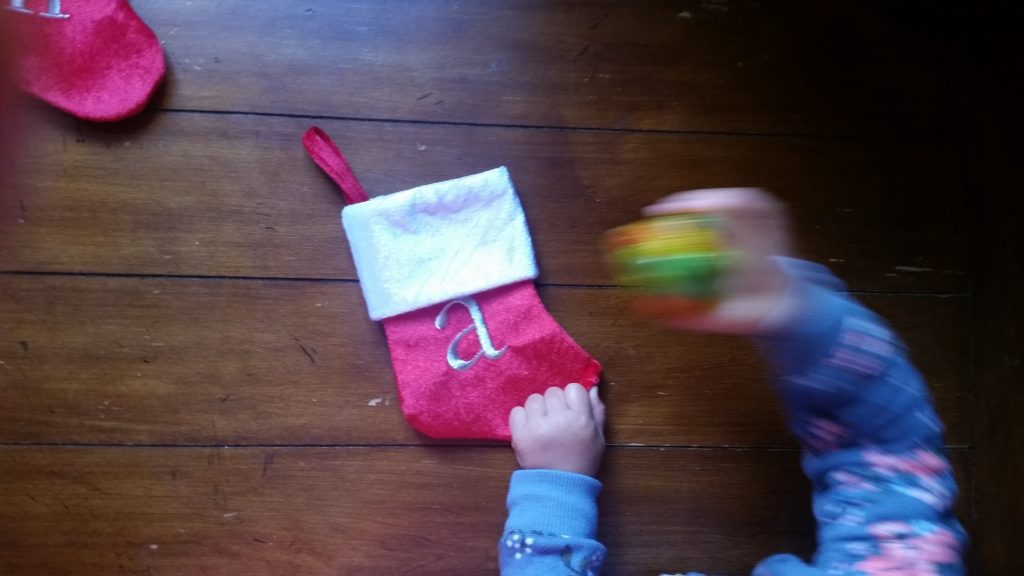