The following is a collection of excerpts from the chapter “My December Disaster” in Jane Larkin’s new book From Generation to Generation: A story of intermarriage and Jewish continuity which have been reprinted with permission. 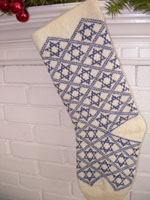 Interfaith family religious homelife is ﬁlled with contradictions. Even families with one clear religious identity ﬁnd themselves in paradoxical and ironic situations as they strive to ﬁnd a balance that works for them. Some are conscious decisions, and others ﬂow from the natural evolution of family life or are created by the calendar. My Christmas stocking at my in-laws in Vermont is one example. It is white wool, knit with blue Jewish stars.

When it was presented to me at my ﬁrst Christmas with the Larkins, when [my husband] Cameron and I were dating, I was touched rather than offended by the blending of the two symbols. I saw the stocking as an effort on the part of my future mother-in law to recognize and honor my religious identity, while making me feel a part of their holiday celebration.

I feel much the same way about our Christmas tree. It is clear from the decorations that we are Jewish, yet the smell, color, and feel of the evergreen in our living room allows my husband to enjoy a symbol that conjures wonderful memories of a family celebration and make new ones with his Jewish family. 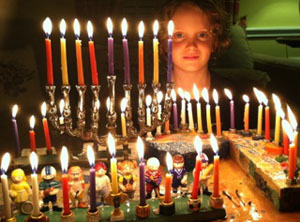 We have lit the menorah in front of the tree and have had Shabbat dinner on Christmas Eve while gazing at its lights. When Hanukkah has fallen during Christmas, we have lit the candles with my in-laws, adding the glow of the ﬂames to that of the tree lights. [Our son] Sammy even asked my mother-in law to crochet him a new batch of kippot as a Christmas gift.

While some may be against such blending, I ﬁnd beauty in the acceptance, respect, honor, and inclusiveness of it all. Yet, I do not want my words or actions to be misinterpreted as a stamp of approval for having a tree or lights or a wreath. For some families that have not fully embraced one religion, the different symbols may be confusing for children or touch a nerve with one partner.

I deﬁne Jewish interfaith families as those actively engaged in creating a Jewish home and making Jewish choices, such as temple membership and involvement, Jewish preschool or day school, religious school, and regular holiday and ritual practice. Often these couples are bothered by what they feel is the judgment of them as “bad Jews” for any acknowledgment of Christmas in their home. Jewish leadership, given the high rate of intermarriage and the desire to have these families make Jewish choices, discourages dual holiday symbols as a way to solidify an interfaith family’s Jewish identity. With, at most, one program a year, most congregations are focused on the latter. This is what makes forums such as interfaith moms, dads, parents, or couples groups and InterfaithFamily an important part of outreach efforts. These avenues provide for the intimate sharing of stories in a nonjudgmental environment, learning by listening and nuanced counseling on approaches to interfaith challenges.

As I write the ﬁnal words of this chapter, I am sitting in my living room in front of our tree. It is late. “Not a creature is stirring, not even a mouse.” The smell of evergreen is fresh. I love the fragrance of a real tree. It reminds me of the summer resort we go to in Maine. As I gaze at the ornaments illuminated by small white lights, I see my family and friends. 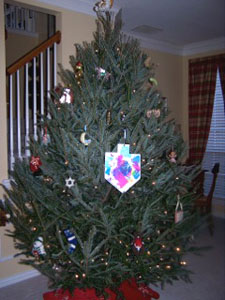 The giant, laminated dreidel that Sammy and I made when he was one at a Mommy and Me class reminds me of my friend, Nina, and her daughter, Ellen, who we met in the class shortly after moving to Texas. They were our ﬁrst friends and have since become our Dallas family who we share holidays with. The horse and jockey from Keeneland, the thoroughbred racing facility in Kentucky that hosts one of the premier races leading up to the Kentucky Derby, was one that we bought when Cameron and I went to the event with my cousin when I was three months pregnant with Sammy. The beautiful wooden hamsa my mother brought me from Israel. My mother-in law’s crocheted Star of David that she gave to us from her ornament collection. The garbage from the year Sammy decided we needed to incorporate the three Rs—reduce, reuse, and recycle—into our tree trimming. He rummaged through the recycling bin and found items to add to our decorations, spilling the contents of the bin all over the kitchen in the process. The Jewish star garland made for us by a friend as a thank you for inviting her daughter to spend Hanukkah with us when she was away on business. A picture of Sammy at his desk, in a kippah, during kindergarten at his Jewish day school, surrounded by a frame that he decorated with Pam during Grandparents Day. Our newest ornament, a snowman made in 2012 by Sammy at a bone marrow drive for a child with whom he went to preschool. The boy was ﬁghting leukemia, and Cameron and I had our cheeks swabbed in order to become part of the national bone marrow registry. This Frosty look-alike is a reminder that, in the season of giving, we may at some point have the opportunity to give the ultimate gift—the gift of life.

As I replay each ornament’s story in my mind, I also think about how my family’s holiday traditions mirror those of many Jews that have gone before us. For the Jewish elite of Western Europe, holiday symbols (such as the tree) signiﬁed secular inclusion in society. In his article “Jews & Christmas” on My Jewish Learning, the leading transdenominational website of Jewish information and education, Rabbi Joshua E. Plaut writes about how wealthy German Jews posed for family portraits in front of decorated Christmas trees, and that following in the footsteps of the Viennese Jewish socialite Fanny Arnstein, many had trees in their homes. Theodor Herzl, “the father of modern Zionism,” was among those that engaged in this tradition.

Plaut also points out that in the late 1800s, as Christmas became a more secular holiday in the United States, Jews in major cities incorporated many Christmas traditions into their own Hanukkah celebrations. But while many Jews adopted Christmas traditions as a means to assimilate, it did not mean that they abandoned Jewish ritual observance. In his discussion of Herzl in Jewish Literacy Joseph Telushkin notes that the Zionist was not totally assimilated. “He attended services quite regularly at the liberal synagogue in Budapest, and throughout his life adhered to the traditional practice of asking his parents for a blessing before he undertook major projects.” Plaut believes that when Hanukkah was being promoted as the Jewish alternative to Christmas in the 1950s and 1960s, it actually elevated the status of this minor holiday. He states that Christmas did not destroy Jewish identity but rather provided an occasion for Jews to reafﬁrm their Jewishness through ritual observance and the performance of Christmas mitzvot.

The debate about whether to have a tree or not has been waging for a long time. Many Jews, past and present, have come down on the side of the tree, and the Jewish people have managed to survive. If we remind ourselves of this, then Christmas does not need to be feared. For families that attend to the construction of their religious identity during the other eleven months of the year, a tree will not make them less Jewish (just as the lighting of a menorah will not make an otherwise Christian interfaith family less Christian). If we observe our chosen religion year-round, what happens in December stays in December. One season or one month does not need to deﬁne us.

For Jews, it is more likely that the debate among denominations and in Israel over who is a Jew will be what shakes a family’s Jewish identity. I never thought much about the various views on Jewish descent until I became involved in outreach work and realized how my own family secrets could affect my very acceptance as a member of the tribe. The often-heated discussions over the best way to maintain Jewish continuity—genealogical purity versus egalitarian acceptance—have the potential to rupture Judaism far more than a tree.

From Generation to Generation is available at Indibound, Amazon and other retail outlets.