Interfaith Celebrities: Something Hot as Winter Rolls On

Each year, the popular website Askmen.com runs a list of the “world’s 99 most desirable women.” Unsurprisingly, as with previous years, a number of the women are from Jewish and interfaith backgrounds.

The new list came out about a month ago, but due to the press of other news, like the Oscars, I didn’t have a chance to cover the 2011 list until now. All of the women, below, have been covered in this column before, but I have added additional information. Just click on their name for info in prior columns. 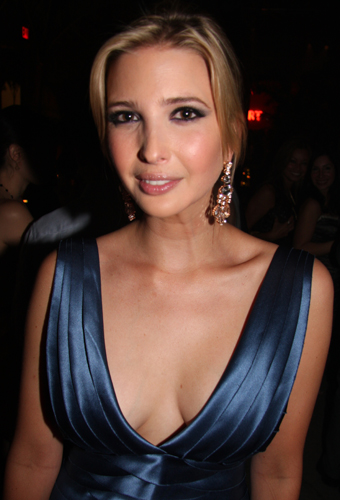 About four years ago, Ivanka began dating Jared Kushner, the publisher of the New York Observer newspaper. He comes from an Orthodox Jewish family that became wealthy via real estate investments. In July, 2009, Ivanka converted to Judaism under Modern Orthodox supervision in the US. In October, 2009, the couple had a Jewish wedding ceremony. Last month, Ivanka and Jared announced that they are expecting their first child.

(91) Lea Michele, 24. Michele is the New Jersey-raised daughter of a Sephardi Jewish father (Mark Sarafati, a deli owner) and an Italian Catholic mother (Edith Sarafati, a nurse). As Michele noted in the current issue of Cosmopolitan magazine, Sarafati is still her legal name. She took Michele, her middle name, as her stage name.

Michele has soared to stardom playing the Jewish character, Rachel Berry, on Glee, the hit TV show. Last month, she sang “America the Beautiful” at the Super Bowl and (easily) managed to sing the correct lyrics. As I have noted before, Michele said she was exposed to both of her parents’ faiths growing-up. It doesn’t appear that she has made a choice of faith as an adult. 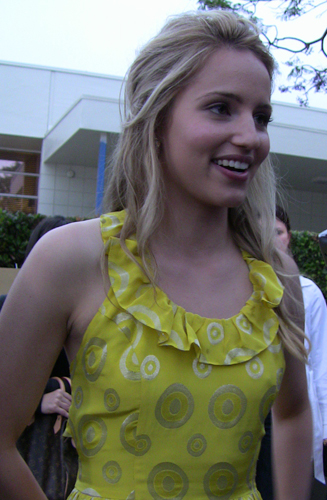 (81) Dianna Agron, 24. Agron became famous playing (the Christian character) Quinn Fabray on Glee. She is now co-starring in her first major feature film, I Am Number Four. This sci-fi spectacular opened a few weeks ago to mixed reviews, but it’s doing strong at the box office — you probably can still catch it in theaters. In real-life, Agron started dating her co-star, British actor Alex Pettyfer (who isn’t Jewish), soon after their movie began filming. However, they officially broke up a couple weeks ago.

Agron mostly grew up in a San Francisco suburb. Her father, who works for Hyatt hotels, is Jewish by birth. Her mother is a convert to Judaism.

Recently, I received a letter from the (former) Religious School coordinator of the San Francisco Bay Area synagogue that Agron, her parents and her brother attended. Dianna had her bat mitzvah there. The coordinator described both her parents as “true mensches” and Dianna as “very sweet and lady-like.”

(83) Rachel Bilson, 29. Bilson became famous with her co-starring role as Summer Roberts on The O.C., the hit TV series that ran from 2003-2007. On the show, she was the girlfriend of Seth Cohen, an interfaith character (Jewish father) who was the central character of the series.

In real life, she dated Jewish actor Adam Brody, who played Cohen, for several years before breaking up in 2006. Her career since The O.C. hasn’t been exactly soaring, but one juicy film role could turn things around for her. Bilson’s father, Danny Bilson>, a TV/film director, is Jewish. Her mother, Janice Strango, a sex therapist, is Italian American and not Jewish (her parents divorced a long time ago). From what I can gather, Rachel is secular.

By the way, her grandfather, Bruce Bilson, now 83, was a leading director of TV comedies and crime dramas. Early last month, he appeared on the PBS special, Pioneers of Television: Crime Dramas, and talked about directing the original Hawaii-5-0 TV series. No doubt, this special will be re-run, so check your local PBS station listings for encore showings of the program. 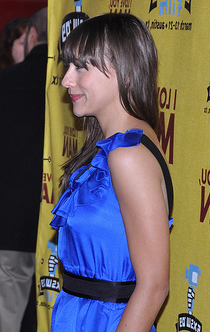 Rashida Jones currently co-stars in the NBC TV series Parks and Recreation, which began its third season at the end of January, 2011. Previously, she had important roles on The Office and Boston Public. She was very charming as (Jewish actor) Paul Rudd‘s fiancée in the 2009 film comedy hit I Love You Man. As you can see, in a religious sense, Jones identifies as Jewish and went to Hebrew school.

(19) Bar Refaeli, 25. An Israeli fashion model, Refaeli became famous worldwide when she graced the cover of the 2009 Sports Illustrated swimsuit issue. She has been dating famous actor Leonardo DiCaprio (who isn’t Jewish) since 2005. They are now, again, very much a couple. In November, 2010, Dicaprio and Refaeli visited Israel together (not their first visit, either).

The gossip media has had a field day inventing stories about DiCaprio converting for Refaeli before they wed. There is no proof for these stories, including a dozen since 2006 saying his conversion was a done deal.

(12) Emmanulle Chriqui, 33. Chriqui was #1 on last year’s list. Born and raised in Canada, the daughter of Moroccan Sephardi Jewish parents, Chriqui is best known for her supporting role as Sloan on the HBO series Entourage.

As one critic recently pointed out, Chriqui is a competent actress and, obviously, very good looking. It is a mystery why she hasn’t been in more films, and of better caliber, than the ones she has co-starred in. Even on Entourage, her role has not been consistently large and she’s entirely absent from some episodes.

However, I am looking forward to her guest appearances on the Showtime TV series The Borgias, which premieres this April. TV Guide reports: “This period drama stars Jeremy Irons as Rodrigo Borgia, the patriarch of a corrupt, Renaissance-era Italian noble family who becomes Pope Alexander. Chriqui, best known as E’s fiancée, Sloan, on Entourage, will appear in three episodes as Sancia, a seductive Neapolitan princess who weds the Pope’s youngest son, Joffre (Aidan Alexander), even though she’s after another Borgia brother.”

(11) Natalie Portman, 29. Portman, the current Best Actress Oscar winner, has been featured many times in this column over the past few months.

(7) Scarlett Johansson, 26. Johansson, the daughter of an American Jewish mother and a Danish father, had an up-and-down year in 2010. Early in the year, she won the Tony for best featured actress in Broadway play (View from the Bridge). However, as noted in a recent column, her two year marriage to actor Ryan Reynolds ended late in the year. Johansson has referred to herself as Jewish on a couple of occasions, but really isn’t religious. 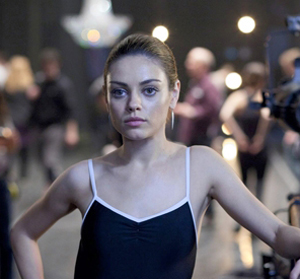 (2) Mila Kunis, 27. There’s little doubt that Kunis’ high ranking on the list this year is a reflection of her successful move into feature films, playing sexy characters in Forgetting Sarah Marshall (2009) and Black Swan (2010). She has been profiled, twice, in this column recently. First, when she was nominated for the Golden Globe (best featured actress) for Black Swan. Not long after, I discussed her break up with longtime boyfriend Macaulay Culkin.

By the way, since Kunis and Johansson’s recent break ups with their respective partners, I’ve often joked with friends that it would be an interesting sociological experiment to somehow get them “credibly” listed on JDate, the online Jewish dating site, and then see how long it would take for the site to crash from the overwhelming response their “ads” would elicit.

Following Up: Lindsay and Samantha

A couple of years ago, actress Lindsay Lohan, 24, was in a hot-and-heavy romantic relationship with Samantha Ronson, 33, a British Jewish disc jockey. As I noted then, Lohan was posting statements on her website about possibly converting to Ronson’s faith. In early 2009, the couple broke up. Since then, Lohan struggled with her substance abuse problems. Currently, she is on probation for drunk driving convictions and is facing jail time for a felony charge for shoplifting a piece of jewelry.

But it looks like she and Ronson are back together again. On Feb. 18, Ronson tweeted: “watching grey’s anatomy-my fav show-@lindsaylohan sleeping next 2 me- should i wake her up to let her know her mom is going on GMA?”

More on their rekindled relationship can be found in this People article.

By the way, as I’ve noted before, Ronson’s brother, Mark Ronson, a top music producer, was once engaged to Rashida Jones.

Not long before Valentine’s Day, I had a special column featuring love songs by interfaith songwriters and love songs by Jewish composers sung by singers of other faiths. One song in the latter category was “Chelsea Hotel, #2” by Canadian Jewish singer/composer Leonard Cohen, 76. It is about Cohen’s short romance with ?60s rock music legend Janis Joplin (who wasn’t Jewish). The version of this song (embedded) within my column was performed by Rufus Wainwright, 37, who isn’t Jewish. 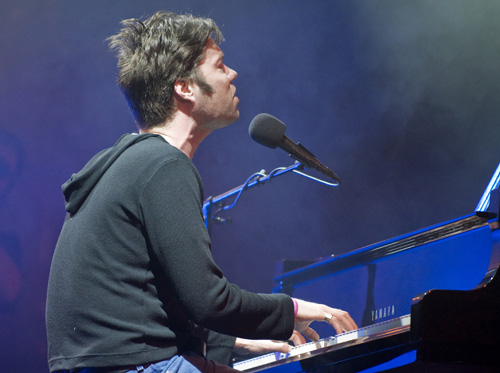 In a 2005 documentary about Cohen (I’m Your Man), Wainwright said that he had known Cohen since he (Wainwright) was a child in Montreal and that he was childhood friends with Cohen’s children, Lorca Cohen, who was born in 1974, and Adam Cohen, who was born in 1972. Adam has followed his father and is a professional musician. Lorca reportedly owns an antique store in Los Angeles and worked as a photographer/video photographer during her father’s 2008-2010 tour. Lorca, by the way, was named after the famous Spanish poet, Federico García Lorca (1898-1936).

Well, on Feb. 18, this short article appeared on the Entertainment Weekly website. It is brief enough to re-post here. Similar articles have appeared in many other publications:

Wainwright also dedicated a song lyric to his new daughter: “Daddy #1 would like to offer everyone a digital cigar and welcome the little lady in with a French phrase from his favorite folk song, ‘A La Claire Fontaine’: ‘Il y a longtemps que je t’aime, jamais je ne t’oublierai.'” The lyric’s translation: “So long I’ve been loving you, I will never forget you.”

Okay, so let me sort out all of this for you. Lorca Cohen and her brother are Leonard Cohen’s only children. Their mother is Los Angeles-based artist (mostly a painter) Suzanne Elrod. She and Leonard Cohen were partners from about 1968 to about 1976. They met in an elevator in NY’s Plaza hotel, in early 1968, when she was only 19. Cohen’s academic biographer, Ira Bruce Nadel, in his book, Various Positions: A Life of Leonard Cohen (1996), describes Elrod as Jewish, quite attractive, and originally from Miami. Cohen, Nadel writes, gave Elrod a filigreed Jewish wedding ring, but they never actually married. Cohen did, however, support Elrod and his children after they split up. (All sources seem to agree that Leonard Cohen is a “mensch,” and that description includes him assuming financial responsibility for those close to him.)

Rufus Wainwright’s late mother, singer/composer, Kate McGarrigle (1946-2010), was of French Canadian Catholic background. His father, folk singer/composer Loudon Wainwright, III, 64, is a North Carolina native of English and Dutch Protestant ancestry. Rufus Wainwright’s life partner (referred to as “deputy dad” above), Jorn Weisbrodt, is a German national and a theater producer. (I very much doubt he has any Jewish background).

So, in sum, baby Viva Katherine Wainwright Cohen has one of the most varied national/ethnic/religious/parentage backgrounds that I’ve ever come across.