At the Movies: Monsters and Mothers

Opening on Wednesday, December 19, is a 3D re-issue of the 2001 Pixar animated classic, Monsters, Inc. The two lead monsters in Monsters, Inc. are voiced by Jewish actor Billy Crystal, 64, and John Goodman, 60 (who isn’t Jewish, but played my favorite Coen brothers’ Jewish character — the wild, Jew-by-choice Walter Sobchak in The Big Lebowski). 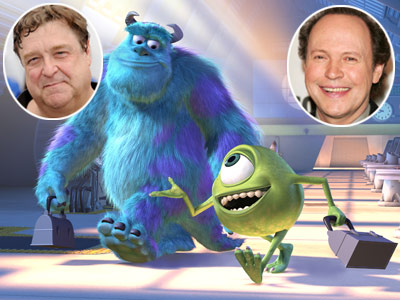 John Goodman as Sully and Billy Crystal as Mike Wazowski in Monsters, Inc.

Monsters, Inc. was co-directed by Lee Unkrich, 45. Unkrich is the son of a Jewish mother and a non-Jewish father. He was raised in his mother’s faith. He grew up in a Cleveland suburb and got a degree in cinema from the University of Southern California. He went to work for the new Pixar animation studio in 1995, and his temporary editing assignment there on the original Toy Story movie turned into a full time job. After Monsters, Inc., he co-directed Toy Story 2 and was the producer, sole director, and co-writer of Toy Story 3. In 2011, he won an Oscar as the producer of Toy Story 3, the best animated film of the year.

Unkrich and his wife have three children and belong to a San Francisco-area synagogue.

Opening the same day is The Guilt Trip, a comedy about Joyce Brewster, a Jewish mother (played by Jewish actress Barbra Streisand, 70) and Andy Brewster, her inventor son (played by Jewish actor Seth Rogen, 30). The Brewsters take a 3000 mile road trip across America, driving from New Jersey to San Francisco. Along the way, Andy tries to sell his invention.

Streisand, as I have noted before, has been married to actor James Brolin, 72, who isn’t Jewish, since 1998, and she is the stepmother of actor Josh Brolin, 44, and the step mother-in-law of Josh’s wife, actress Diane Lane, 47.

This is just about this movie’s only interfaith connection. Still, it is something of an “event” for another reason. It is Streisand’s first starring film role since the The Mirror Has Two Faces (1996).

Rogen and Streisand were recently interviewed by Reel Life with Jane’s Paula Schwartz. Rogen revealed that the whole “road trip” took place in a studio not far from Streisand’s Malibu, California home. (She made it clear that she wouldn’t star in any film that was filmed more than 45 minutes from her home). 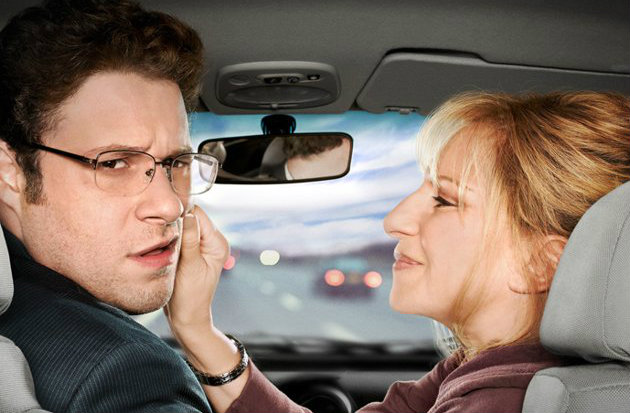 Seth Rogen and Barbra Streisand as son and mother in The Guilt Trip.

Rogen added that he and Streisand never sang together during breaks in filming. But she did regale him with “war” stories, like turning down a proposition from Marlon Brando and smoking pot with the late English comic actor Peter Sellers (who was the son of a Protestant father and a Jewish mother).

Streisand told Schwartz she was going to pass on the movie because she had long limited herself to supporting parts (like Meet the Fockers, in which her role was filmed in a week). Then, she said, a friend told her, “You’re an actress so you should act.” Not long after, Streisand said, she read The Guilt Trip script out loud with her son, and he thought she should do it. Her “yes” decision was also influenced by the prospect of working with Rogen. She said about Rogen,

I’d seen a few of [his movies]. I was a little shocked because I’m sort of a prude. He just said that? He showed that? Oh my God! But I thought he’s really cool. So I thought, “Yeah, good. Two different generations put together.”

Streisand added that the film’s director, Anne Fletcher, really pursued her, “which was nice.” Fletcher recently helmed the commercially successful, but pretty vapid, romantic comedies 27 Dresses and The Proposition. However, Dan Fogelman, 40, the Jewish writer of The Guilt Trip, is a much better writer than the writers of those films. He wrote the very charming animated film Cars (2006) and the intelligent romantic comedy-drama hit Crazy, Stupid, Love. (2011).

On November 23, a documentary entitled The Central Park Five opened in a few theaters. Many more theaters were added last week and, like many documentaries and indie films today, it can be viewed in the comfort of your home via the on-demand service provided by most cable/satellite providers.

The documentary is based on the 2011 critically-acclaimed book, The Central Park Five, by Sarah Burns, 30. The book and the documentary recount the story of how five black and Latino teens were arrested in 1989 for raping a white female jogger in New York City’s Central Park and how they were exonerated after five years in jail.

Ken Burns, who isn’t Jewish, has been married to two Jewish women. His first wife, Amy Stechler Burns, a documentary filmmaker in her own right, often collaborated with Burns on his documentaries when they were married. They were married from 1982-1993, and Amy Stechler is the mother of Burns’ two children, Sarah, mentioned above, and another daughter, Lily, now 26. In 2003, Burns married another Jewish woman, Julie Deborah Brown.

The haunting theme song for Ken Burns’ multi-part documentary on the Civil War, “Ashokan Farewell,” was written by fiddler Jay Ungar, 67. Ungar, the son of European Jewish immigrants, has described this instrumental as a “Scottish lament written by a Jewish guy from the Bronx.”

Last month and this month, most PBS stations are playing or re-playing a new special entitled, A Fiddler’s Holiday with the Jay Ungar & Molly Mason Family Band. I saw the special and it includes a tune called “Lights of Chanukah,” which Ungar said he wrote for his daughter, Ruth Ungar, when she was a little girl. The special includes traditional Christmas and winter songs and they also perform a very lovely rendition of “Ashokan Farewell.”

Ungar has been married twice. Ruth, who plays fiddle and sings in the Family Band, is his daughter from his first marriage. (I don’t believe her mother is Jewish.)

Molly Mason plays guitar in the Family Band. Mason, who isn’t Jewish, has been married to Jay Ungar since the mid-1970s.

Rounding out the group is Ruth’s husband, Michael Merenda, Jr., who plays guitar, banjo, and percussion.

Fun Odds and Ends — One Thing Leads to Another

The other day, I stumbled on a year-old New York Magazine interview with John Clesse, 73, of Monty Python fame, in which he discussed guest starring on the sit-com, Whitney. In passing, he told the magazine that he has an emu named “Gwyneth Paltrow” on his Santa Barbara ranch. He named the emu after actress, Gwyneth Paltrow because he once went out with actress Blythe Danner, Paltrow’s actress mother. (Paltrow’s late father was Jewish, Danner is not.)

But, Cleese said, he turned down his adult daughter’s offer to try and set him up with Jake Gyllenhaal‘s mother, Jewish screenwriter Naomi Foner, 66, even though Foner “seemed nice.” (Jake, who identifies as Jewish, is the son of director Stephen Gyllenhaal, who is not Jewish, and Foner.)

The mention of Jake Gyllenhaal prompted me to check if the Broadway play in which he stars (If There Is I Haven’t Found It Yet) was still running. It is still running, and you have until December 23 to catch him in this comedy/drama.

Jewish actor Ed Asner, 83, co-stars in another Broadway play — Grace. I googled something on Asner and discovered that he also co-stars with Jewish actor Mark Feuerstein, 41 (TV’s Royal Pains) in a pretty funny Hanukkah video aimed at raising money for a charity which helps poor people worldwide by sending them farm animals, including cows, which they can use as sustainable food sources.

Suffice it to say that Feuerstein is very amusing dressed up like a cow.

I googled this charity group and found them cited on Twitter feeds mentioning Hanukkah. Under this subject there are a number of tweets from Tori Avery, who runs the website The Shiksa in the Kitchen.

Intrigued, I go over there and find out that this website (which links to InterfaithFamily.com) features tons of Hanukkah recipes on the home page. A description of Avey reads:

Tori Avey is a culinary anthropologist and convert to Judaism. She specializes in telling the story behind the recipe, allowing readers to recreate and enjoy the flavors of the past. All recipes on TheShiksa.com are thoroughly tested and kosher. The Shiksa in the Kitchen was recently named the 2012 IACP People’s Choice Award winner for Best Culinary Website.

I went back to the Hanukkah tweets, and I saw that the CNN Belief Blog had compiled a list and pictures of “kitschy” Hanukkah stuff. Of course, we’re all familiar with Christmas kitsch, but the Hanukkah equivalent exists and CNN has done the hard work of reviewing this amusing stuff like a menorah in the shape of a cat.

Happy Hanukkah to my readers!