411 on the Golden Globes 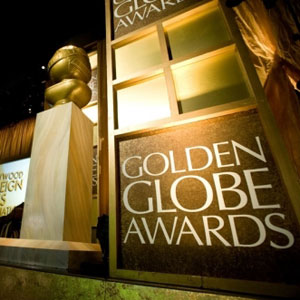 Just below is my list of Jewish and interfaith nominees for the Golden Globes which airs live on NBC on Sunday, January 15, at 8 P.M., EST and 5 P.M., PST.

The Globes are awarded for excellence in both film and (American) television. The voters for the awards are members of the Hollywood Foreign Press Association.

The ceremony is faster-paced, more informal and usually just more fun than the Academy Awards ceremony. Plus, for the third year running, the Globes will be hosted by the very acerbic and often very witty comedian/writer Ricky Gervais. He often “goes rogue” and makes cutting comedic remarks that genuinely offend many of the movers and shakers in the movie industry. This makes him unique as the host of a major awards show and, for me, fun to watch.

Gordon-Levitt, Hill and Brooks are the children of two Jewish parents. I’ve noted Margulies’ unusual Jewish background in past columns.

Both these directors are the sons of two Jewish parents.

The critical acclaim for The Artist may turn Hazanavicius, who also wrote the film, into this year’s Golden Globe and Academy Award “darling.” He is virtually unknown to most Americans so I’m sure many of you would like to know a bit more about him.

Hazanavicius[1] is a French Jew. His four Jewish grandparents were all born in Eastern Europe and settled in France in the 1920s. He made several well-received French language spy spoof films before The Artist. The Artist, as you may have read, is a black-and-white film that is mostly silent (although there is a musical score throughout).

Hazanavicius is quite open in talking about his Jewish background and he says he worked some subtle “Jewish references” into his film, like Jewish musical themes and some character names. He says he did this as a tribute to the historically heavy Jewish presence in the American film industry.

The Artist was filmed in the United States, with a cast that included French and American actors.

The film’s action begins in 1927. Hollywood silent screen idol George Valentin (played by French actor Jean Dujardin, 39) is enjoying the good life with his wife. He meets Peppy Miller, a sexy, young extra (played by Bérénice Bejo, 35). Valentin gives her a job and they eventually become a couple. Then the talkies come in (1929-1930) and Miller’s career takes off, while Valentin’s sadly declines.

Bejo, an Argentine native who grew up in France, is the real-life wife of Hazanavicius. There is very little personal biography available on her and I was unable to determine if Bejo is of Jewish background. Bejo is nominated for a Best Supporting Actress Globe for her performance in her husband’s film.

By the way, Hazanavicius invited Jewish director Mel Brooks, 85, who made the 1976 (silent) comedy Silent Movie, to have a small cameo in his film, sending him a note that read: “I’m a comedy director…and I’m doing a silent movie and I’m Jewish, so, really, would you like to come?” Brooks politely declined, saying he was tired and working hard on his newest Broadway musical.

All the nominees mentioned, just above, are the sons of two Jewish parents.

As for the two Best Motion Picture categories, the award actually goes to the winning film’s producers, of whom there are usually many.

All the people mentioned just above, with one exception, have two Jewish parents.

Adrien Brody, as I have noted before, is the secular son of an American Jewish father and a Hungarian-born mother. Brody’s mother (well-known photographer/journalist Sylvia Plachy, 68) who was raised Catholic, learned as an adult that her Czech mother was Jewish. Plachy’s Hungarian Catholic father hid Plachy’s Jewish mother during the Holocaust.

New on the Tube, With an Aside

Are You There, Chelsea? begins on NBC on Wednesday, January 11, at 8:30 P.M. This sitcom is based on a best-selling 2008 memoir by comedian/talk show host Chelsea Handler, 36. (Handler, the daughter of a Jewish father and a Mormon mother, was raised a Reform Jew.)

The show’s main character, Chelsea Newman (played by Laura Prepon), is a thinly disguised version of the real-life Handler, who worked as a bartender when she was younger.

In the show, Chelsea Newman tends bar at a sports bar and hangs out with a wacky group of working-class friends. Chelsea Handler, herself, will appear sometimes as Chelsea Newman’s older sister, Sloane.

Prepon, 31, is the daughter of a Jewish father and a mother of Irish American background. While I believe she was raised secular, she now identifies as a Scientologist.

Rob is a CBS sitcom that starts on Thursday, January 12, at 8:30 P.M. Rob Schneider, 48, stars as a lifelong bachelor who has just married into a tight-knit Mexican-American family.

Schneider is the son of an American Jewish father and a Catholic mother who was born in the Philippines.

While secular, Schneider identifies as Jewish and did himself proud when, in 2006, he paid for a big ad in Variety. The ad was an open letter from him denouncing Mel Gibson’s recent anti-Semitic remarks.

And to end this column where I began — last year Ricky Gervais really tore into Mel Gibson at the Globes. (Remember the tapes of those Gibson phone calls?) This year, I suspect, Gervais will have other targets.

[1] On December 27, 2011, after I had completed this column item, a long interview with Michel Hazanavicius appeared in the New York Jewish Week newspaper. The focus of the interview was his Jewish background. He mentioned that his parents were “hidden children” during the Holocaust. That usually means they were hidden from the Nazis with the help of friends who weren’t Jewish.

I wish the Jewish Week reporter had asked the director about the origin of his last name. It seems to me that the first part of his name (Hazan) indicates an ancestor was a religious Jewish cantor, or, in Hebrew, a “hazan”. The ending of his last name sounds like name endings in some non-Slavic Eastern European languages like Latvian. Together, the whole name sounds remarkably “quasi-Latin.” Friends and I have joked that if the ancient Roman army had a Jewish battalion, and they had a cantor attached to the battalion, he would be called a “hazanavicius.”