Thoughts on the Golden Globes® and More Girls Stuff

Lena Dunham at the Golden Globes.

Anne Hathaway, as expected, won the Best Performance by an Actress in a Supporting Role — Musical or Comedy Golden Globe® for Les Misérables and we got a brief glimpse of her Jewish husband, Adam Shulman, as she thanked him from the Globe stage.

I was surprised that Girls, the HBO comedy created by and starring interfaith actress Lena Dunham, 26, won the Golden Globe® for Best Television Series — Comedy or Musical. TV shows rarely win a Golden Globe® or an Emmy® as “best show” their first year on the air. It seems like voters seem to want to see if the show has legs and can keep up its quality. Likewise, I was surprised that Dunham won the Globe® for Best Performance by an Actress in a Television Series — Comedy or Musical the first time she was nominated. Dunham looked pretty surprised, too, on the Globe® stage, although she quickly recovered and did just fine in her acceptance speech.

Girls has just begun its second season and if you follow the show, you know that at the close of the first season, Jewish character Shoshanna Shapiro (one of the four female friends who constitute the “girls”) finally lost her virginity to coffee shop owner Ray Ploshansky. Ploshanksy, who was a recurring character last season, has been upgraded to a series regular this season.

Playing Ploshansky is Jewish actor Alex Karpovsky, a 30-something guy who is also a respected indie filmmaker. The son of Russian Jewish immigrants, he grew up in Newton, MA. His father is a computer science professor at Boston University.

In a January 13, 2013 New York Times article entitled “The Boys of Girls,” Karpovsky has a complaint common to the children of many immigrants. They just don’t “get” what he is doing: 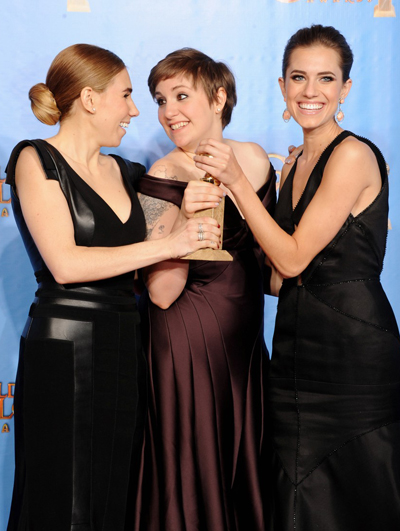 My parents are immigrants. My mom doesn’t speak a word of English. I just don’t think they understand anything that I do. So, when they watch the show, it’s just sort of like a fuzzy bright object swimming across the plasma screen. “When are you going to meet a nice Jewish girl?” That’s what they talk about.

Well, if Karpovsky’s parents are looking for him to meet a “nice Jewish girl,” he landed in the right spot. As I have written before, three out of the four lead female cast members are of Jewish background.

Dunham (who plays Hannah Horvath) is the daughter of a Jewish mother and a non-Jewish father.

Karpovsky’s love interest in the show, Shoshanna Shapiro, is played by actress Zosia Mamet, 24, the daughter of a Jewish father and a non-Jewish mother. Shapiro’s cousin, Jessa Johansson, is played by Jemina Kirke, 27, the daughter of a Jewish mother and a non-Jewish father. The only of the four “Girls” who doesn’t have a Jewish parent is actress Allison Williams, 24, who plays Marnie Michaels.

Zosia Mamet, as I have noted before, is the daughter of famous Jewish playwright David Mamet, 65, and his ex-wife, actress Lindsay Crouse, 64. Crouse, who wasn’t born Jewish, is reported to be a devout Buddhist. Zosia has one full sibling, an older sister named Willa Mamet.

David Mamet became an observant Jew later in life. His interest in Judaism came not long before he met and married English actress and musician Rebecca Pidgeon, now 47. Pidgeon, who came from a non-practicing Christian home, converted to Judaism before marrying Mamet in 1991. Together they have two children, a son, Noah Mamet, and a daughter, Clara Mamet, now 17.

I really didn’t know that much about Zosia Mamet until she was profiled in the New York Times Magazine on January 2, 2013. Most of the article, as you would expect, is about her professional career, how she got the Girls role, and its effect on her life. But she does open up about her family/personal life and religious identification. Here are some excerpts:

Mamet, whose first name is pronounced ZAH-shah (“Like Sasha with a Z”), lived in New England until she was 5. Her parents divorced when she was “like, 1.” Later, her mother moved her and her older sister, Willa, to the Pacific Palisades section of Los Angeles, where she went to an Episcopal school — just because it was a good school, not for religious reasons; neither of her parents is Episcopalian, and she identifies as Jewish, like her father. “The only WASPy part of me is that I like gin,” she says. “Oh, and I ride horses.”

I am virtually certain that the Episcopal school she went to is the same school from which interfaith actor Jason Segel, 33, graduated.

She says she always had a tumultuous relationship with her mother, and when she was 17, she left home to live with her father and stepmother, the actress Rebecca Pidgeon, and her half siblings, Noah and Clara. About her current relationship with her mother, she’ll say only that as far as she is concerned, they haven’t reconciled. Other than that, she says, “we’re a very close family.”

Until recently, Mamet lived in L.A., but then she realized that Girls, which is filmed in New York, might be on for a while, so she decided last year to relocate. She says she gets along well with her stepmother and her siblings; in fact, Clara, whom Mamet called one of her best friends, also recently forayed into the family business. She’s an actress, too, and now stars on the ABC sitcom The Neighbors.

She is proud to be helping her audience figure it out, or at least helping them understand there are other people like them out there who haven’t. And she’s very happy the show is so popular. But she’s not Shoshanna. She’s someone else — someone who’s still getting used to the idea that you might want to tell her all about your sex life. “Like, the closeness that I guess people feel to me, things that people have shared voluntarily with me immediately, are so insane,” she says. “And I’m not an easily shocked human.”

The 113-day lockout of National Hockey League (NHL) players by the owners is over. On January 7, NHL Commissioner Gary Bettman, 60, and Donald Fehr, 64, the executive director of the players’ union (NHLPA) announced a tentative agreement. (Both Fehr and Bettman are Jewish and both are attorneys.) The agreement was quickly ratified by respective votes of the owners and the players and the lock-out was officially over on January 12. The shortened season began on January 19. 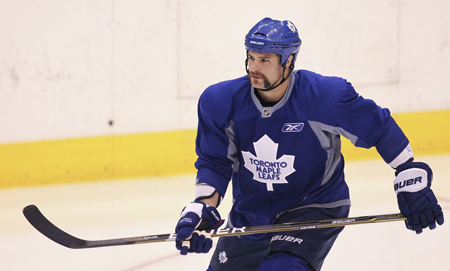 Mike Brown of the Maple Leafs.

There are four Jewish/interfaith players in the NHL as the season begins. All are veterans.

Jewish Sport Review reports that there are ten Jewish/interfaith players now playing in the AHL. Several have had brief stints in the NHL and may be called up again this season or next.

While researching this item, I came across a sad, slightly related story that has not appeared, so far as I know, in most media outlets, Jewish community or not. I long knew that Donald Fehr, mentioned above, was the executive director of the Major League Baseball Players Association (MLBPA) before he took the same post with the National Hockey League Players Association (NHLPA). The MLBPA was a powerless entity in 1968 when the late Marvin Miller, another Jewish attorney, and a former Steelworkers Union staff member, became its executive head. He turned it into a strong union, and secured incredible gains for players. In 1977, he hired Fehr and groomed him as his successor. Fehr replaced the retiring Miller in 1983 and stayed until 2009. In late 2010, he became head of the NHLPA.

I was curious who replaced Fehr as head of the MLBPA. His replacement, I learned, is Michael Weiner, 51. Yes, he is Jewish, too, and an attorney.

It didn’t take me long to find out that Weiner has been battling an almost certainly terminal brain tumor since last July. Nonetheless, he continues to teach Sunday school at his New Jersey synagogue and attend fundraisers for brain tumor victims.

He told ESPN that both Jewish and Christian friends are praying for him:

When Jewish friends ask for his Hebrew name so they can say a prayer, he tells them Shlomo Moshe ben-Yitzhak and thanks them for their concern. Several weeks ago, Weiner received a call from Willy Taveras, a former big league outfielder from the Dominican Republic who has started a church with his wife in Houston. Could they say a prayer for Michael on his behalf? Weiner, touched by the gesture, gave them his blessing.

Point of reference: it’s my understanding that there is a tradition that God will be better able to “identify” and aid a Jewish person who is sick if prayers are directed to God reference the sick person’s Hebrew name. Here’s an explanation of the Jewish healing prayer (“Mi Sheberakh”) and a transliterated version of the prayer for those who don’t read Hebrew.

Weiner seems like a real mensch (a good human being). So, if you pray, include him in your prayers.