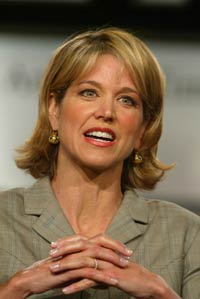 Paula Zahn, who was replaced on CNN in August, is going through a messy divorce from Jewish businessman Richard Cohen. REUTERS/Fred Prouser

When a Firing May Be a Blessing in Disguise

Paula Zahn, 51, had high-profile reporting and anchor jobs with ABC, CBS and Fox News before being hired by CNN in 2001. In 2003, the former beauty contest queen got her own primetime CNN newscast, “Paula Zahn Now.” Citing low ratings, CNN fired Zahn effective Aug. 2.

Straight newscasts like Zahn’s have been dying in the ratings, while news shows with highly-opinionated anchors, like Lou Dobbs and Bill O’Reilly, have fared much better. Frankly, short of doing the news in the nude, there was little Zahn could do to bring up her ratings.

Zahn, who isn’t Jewish, has been married for 20 years to millionaire New York Jewish businessman Richard Cohen. In 2004, she told a Jewish women’s group in Connecticut that she was raising her three children with Cohen in their father’s faith. Cohen and Zahn have a daughter, 17, and two sons, ages 13 and 10.

If Zahn was still on CNN, her very messy divorce from Cohen might have become a national story. Right now, it is mostly a local New York story with the New York Daily News and the New York Post filled almost daily with new details about Zahn’s hot affair with billionaire Jewish businessman and former “family friend” Paul Fribourg.

Last month, they reported that Zahn is claiming that Cohen long withheld sex from her and that he will not tell her where the millions she invested with him is located. To this, Cohen retorts that the sex charge is bogus, that he found a graphic diary Zahn wrote detailing her affair, and that her claim of financial hanky-panky is a phony tactic she’s using to try and break a pre-nuptial agreement that favors him.

Zahn is being replaced in her time-slot by another attractive woman with an apparent affinity for Jewish guys. Her replacement is Campbell Brown, 39, who hosted NBC’s “Weekend Today” for 11 years before leaving last June. Brown is now scheduled to start working for CNN in November.

Brown was born and raised in Louisiana, the daughter of a Protestant father and a Catholic mother. She was raised in her mother’s faith. Her father, James H. “Jim” Brown, was a very prominent Louisiana Democratic politician and attorney until he was convicted in 2000 about lying to the FBI regarding a routine insurance investigation and was sent to federal prison for six months. (Jim Brown was state commissioner of insurance when he was indicted).

It’s really a shame about her father, since he was clearly a progressive populist reformer. He’s an erudite guy who currently teaches courses about Louisiana history at Tulane and Louisiana State University.

Last April, Campbell Brown married Dan Senor, 35, in a civil wedding. The couple met in 2004 when he was the press spokesman for the Coalition Authority in Baghdad, Iraq. She was covering the war for NBC and he was employed by the U.S. government to field questions from the press.

The New York Times, in a special wedding section profile, said that “Senor grew-up in a in a big Jewish family of passionate talkers and passionate cooks. Each evening, they spent hours in the dining room, surrounded by photos of family members who were all part of the conversations about the world and its politics. For them, ‘extended family’ meant extended into the afterlife too.”

Senor has also worked as an aide to a Republican senator, as a venture capitalist, and as a commentator on Fox News.

One update since the Times article: Last June, Brown confirmed that she is expecting her first child. 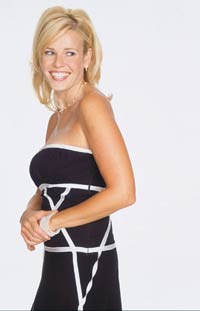 Chelsea Handler, the daughter of a Jewish father and a Mormon father, is the host of E!’s “Chelsea Lately.” Photo courtesy Oxygen Network.

Comedian Chelsea Handler‘s cable talk show on E!, “Chelsea Lately,” is better than most of the junk TV news shows about celebrities. While she isn’t quite as clever as Sarah Silverman, Handler does amusingly savage the foibles of celebrities. (It airs weeknights at 11:30 p.m.)

Handler has some D-list celebs on her show, but the real action is when she, and some regulars, review the daily goings-on of the “beautiful people,” and make catty remarks.

Handler, 32, a very attractive blonde, is the daughter of a Jewish father and a Mormon mother. She was raised Jewish and was a bat mitzvah. A few months ago, Handler told the Cleveland Jewish News that she considers herself a Reform Jew and that, “I go to synagogue on the High Holidays. When I go home, I try to go to a [Shabbat] service with my father.”

Handler, who still does stand-up engagements, formerly hosted “Girls Behaving Badly” on the Oxygen station. She seems to have clicked with “Chelsea Lately.” It began in July and was only supposed to run for six weeks, but it’s got such good ratings that it was just renewed until the end of the year.

For more on Handler, visit her MySpace page.