Scarlett and Stiller Taste the Pudding 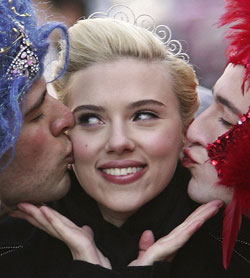 Thespians Ben Stiller and Scarlett Johansson (whose mother is Jewish) are this year’s recipients of the famous Hasty Pudding awards, given by Harvard’s Hasty Pudding Theatricals, the country’s oldest university drama club.

The award is given to performers who have made “a lasting and impressive contribution to entertainment.” Johansson, the Hasty Pudding “Woman of the Year,” led a parade throughout Cambridge, Mass. on Feb. 15, and then attended a roast in her honor. “Man of the Year” Stiller was similarly feted on Feb. 23. (Ben’s father, of course, is Jewish comedian Jerry Stiller. His mother, comedian Anne Meara, is a convert to Judaism).

By the way, Johansson, who was raised in no faith, is reluctant to talk about religion with the press. This doesn’t, however, stop reporters–especially those with “Jewish-sounding” names–from attempting to draw her out.

Jacobs posited to Johansson his theory why’s she’s “the perfect woman for Woody Allen [a huge Scarlett fan] and other conflicted Jewish men.”

Britney Spears and her dog, during happier times at the MGM Grand Garden Arena for the 2004 Billboard Music Awards in Las Vegas, Nevada Dec. 8, 2004. REUTERS/Steve Marcus

Besides writing for Interfaith.family.com, I also write a column on Jewish celebrities for Jewish newspapers. At the end of January 2007, I wrote in my newspaper column:

In the category of 15 minutes of fame there’s one Isaac Cohen, a previously unknown male model from Los Angeles who has been romantically linked to singer Britney Spears for the last few weeks.

On his MySpace page, which was taken down shortly after he was linked to Spears, Cohen wrote that he was Jewish. Except for being Jewish, Cohen seems perfectly suited for Spears. He is very good looking (6-foot-1 and muscular) and bears quite a resemblance to Kevin Federline, Spears’ soon-to-be ex-husband.

As for religion–well, Cohen says that his favorite book is the Bible. But before you conclude that he is a nice Jewish boy–I should add that hunky model strongly implies that he uses the pages of the Bible to roll marijuana joints. Can you say, “oy”?

Okay–your “oy” is said–but don’t add a “gevalt”–because Mr. Cohen and Ms. Spears are almost certainly an item with a short shelf life. By this time next month, Spears will probably have moved on to another pretty white boy who affects the look of a bad boy black rap singer.

On Feb. 10, Spears was photographed wearing a large Star of David that hung on a necklace. It was a gift from Cohen.

In the same photo, Spears’ hair was dyed black and she was wearing a sort of medieval dress. She looked like she was auditioning for the part of an exotic, 12th century Jewish beauty (Rebecca in Ivanhoe?)

Almost immediately after this photo was taken, stories appeared in what I call the “junk gossip press.” They all had headlines that screamed: “Spears reportedly converting for Isaac–Britney fascinated by Cohen’s Jewish faith!”

These are the same sources that proclaimed, during the Kabbalah Centre fad of a couple of years ago, that any celeb seen wearing a Kabbalah Centre “red string” was a “convert to Kabbalah–a branch of Judaism.”

About three years ago, Spears, then Madonna’s buddy, “dabbled” in Kabbalah. But, about two years ago, she said she had given up Kabbalah studies and was just focusing on her new baby.

In light of this past history, I took these new gossip items about Spears’ so-called interest in “Judaism” with a huge grain of salt. They sounded just like the silly reports of a few years ago that made it seem like half of Hollywood had become kabbalah followers.

I thought about writing about the “Star of David” photograph in my Feb. 13th column for InterfaithFamily.com. However, I decided I’d wait a bit and see what else happened with Spears before writing about her for this magazine.

Rabbi Shumley Boteach, an Orthodox rabbi, became famous in 1999 with his book, Kosher Sex, an entertaining study of Orthodox Jewish sexual mores. While he celebrates sex within marriage, the rabbi is against pre-marital sex and he is very opposed to what he defines as the use of sexual images to objectify women as commodities.

I respect Rabbi Boteach, and I am aware that he does a lot of charitable work, but he does seem to like to coast on the fame of the very celebrities he criticizes. About 10 years ago, Boteach was friends with Michael Jackson. That friendship ended and Boteach said he regretted his association with Jackson.

But then the good rabbi started issuing open letters to the press about Jackson’s on-going outrageous behavior long after he and Jackson had parted company. I seriously doubt that Jackson read these “open” letters. Rather, the rabbi’s letters were more in the nature of a publicity release that got Boteach a lot of attention because Jackson was the subject of the letter.

Unlike myself, Rabbi Boteach didn’t wait very long to comment on Spears’ so-called interest in Judaism.

Rather, on Feb. 12, Rabbi Boteach was out with an “open letter” to Britney. In the first lines of his letter he says to Ms. Spears: “as of late you’ve developed an interest in Judaism and have been sporting a Magen David. That’s nice. I hope in Judiasm that you find inspiration and direction in your life.”

Then he went on to chastise her about her party-girl behavior and urge her to be more modest and to tend to her children.

Boteach’s letter made all the gossip pages and was reprinted in several Jewish papers.

On Feb. 15, Cohen broke up with Spears. Mr. Cohen may not have the brains of a Nobel Prize winner–but I sense that Cohen realized he had hooked-up with a person speeding towards a big wreck–and he was getting off the Britney Spears Express immediately.

Up until last week, the Spears/Cohen romance and her so-called interest in Judaism had all the hallmarks of a harmless kooky celebrity story with a Jewish flavor. A story that Jewish celebrity columnists like myself had kind of got used to during the Kabbalah frenzy.

But as just about everybody knows by now, Spears has apparently been in “full meltdown” mode for the last few months. She has been partying at clubs round-the clock, she has been drinking a great deal, and she has been photographed going in and out of nightclubs without panties.

She really captured the world’s attention when, on Feb.16, she went into a modest hair-styling place in Los Angeles and demanded that the stylist shave off all her hair. The stylist refused and Spears shaved off her own hair. Not long after, she went to nearby tattoo parlor, and while fans and photographers gawked from the outside, she got a black-white-and pink cross tattooed on her lower hip and red-and-pink lips tattooed on her wrist.

I don’t know if it was good taste, or ignorance, but nobody in the media seemed to note the weird Holocaust imagery here.

If not immediately selected to die, Jewish women (and men) had their heads shaved not long after they entered a Nazi concentration camp. Then they were taken to be tattooed with an identification number. After that, they were issued prisoner uniform clothing with a yellow cloth Jewish star sewn on to the uniform shirt.

I don’t think Spears was quite conscious of the Holocaust imagery she was harkening back to. But she doesn’t live in a vacuum; she has probably seen Schindler’s List.

The combination of the Jewish boyfriend, the Jewish Star, the shaved head, and the tattoo figure into Spears psychological meltdown in ways I cannot completely fathom or explain.

I am not sure what lesson, if that is the right word, this whole story says about interfaith relationships. But I do think that Spears was casting about for some firm identity to hang on to as she “melted-down.” For a moment, she re-made herself as a Jew. After all, she might have thought, her friend Madonna finally found a solid center in her life as a Kabbalah Centre devotee.

I do think that the larger lesson is that we–and I include myself–should treat the spiritual search of anyone, including celebrities, in a less satiric manner. Yes, some people are just dabblers, always on to the next new spirituality trend. But celebrities, to coin a cliché, are people, too, and they, too, need meaning in their lives.

Perhaps if Spears had found comfort and psychological sustenance in Kabbalah, or the Southern Baptist faith she was raised in, she would not be where she is now.

In any event, Britney Spears is clearly in a lot of psychological pain right now. I think everyone should back off, from rabbis to gossip columnists, and just wish her well and hope that she gets the psychological help she needs.

The spectacle of one of the most famous women in the world turning herself into the image of a Jewish concentration camp inmate is haunting and incredibly sad.

The Contrasting Tale of Christina Aguilera 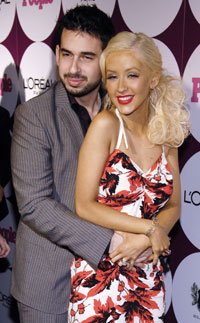 Singer Christina Aguilera and her Jewish husband Jordan Bratman pose together at a post-Grammy Awards party hosted by Beyonce and People magazine in West Hollywood, California, Feb. 11, 2007. They were married in a Jewish ceremony. REUTERS/Chris Pizzello

Both Britney Spears and famous singer Christina Aguilera, 26, got early boosts to their careers by co-starring on the 1993 version of the “Mickey Mouse Club” on the Disney Channel.

There has always been something of a rivalry between the two singers, even if the press made more of it than there really was. In any event, Spears was long depicted as the more “girl next door” type than Christina and much more the role model for teenagers.

I suppose that Christina sees the irony in Spears’ current troubles. Christina played with the image of the “sexy dirty girl” as a marketing tool, but always seemed to keep her personal life grounded–and private, for the most part. Spears is now seen as a “dirty girl” genuinely out of control.

Perhaps Christina’s stability was helped by her long-term relationship with Jewish record producer Jason Bratman, 29, whom she began dating in 2002 and married in 2006. They had a Jewish wedding, although Aguilera, who was raised a Catholic, did not convert to Judaism.

Unlike Kevin Federline, Spears’ ex-husband, Bratman is not a very good-looking guy. On the other hand, he is very well educated and he built an important career as a music executive before he even met Aguilera. Sounds like Christina picked a spouse for the right reasons and it appears that their showbiz marriage is sounder than most.

In a recent interview with the Israeli TV edition of E! TV, Aguilera spoke fondly of her husband and mentioned that she learned some Yiddish from him.