The 64th Primetime Emmys® are being presented, live, on ABC on Sunday, September 23, at 7 p.m.EDT/4 p.m. PDT. Here are the confirmed Jewish/interfaith nominees in the most prominent categories. The names of nominees who created and/or are main producers of a “Outstanding Show” nominee precede the show’s name. 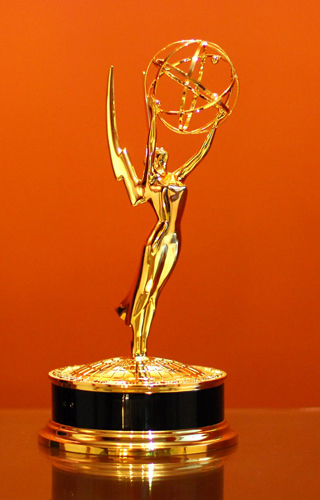 After the list, just below, you’ll see that I have commented on the background of many of the nominees mentioned below. There is also a section, below, covering a few Emmy nominees who are not of Jewish or interfaith background, but have romantic partners who are of such backgrounds. Finally, there’s a brief section with just a few odds and ends that I think are of interest.

Unless otherwise noted below, the nominees listed above are the children of two Jewish parents.

Lena Dunham, the creator and star of what I have labeled the “most interfaith-y (in terms of cast) show ever” is the daughter of a Jewish mother and a non-Jewish father.

Mayim Bialik is the (quite religious) daughter of two Jewish parents. As noted in a previous column, her husband is a former Mormon who converted to Judaism.

Mare Winningham is a devout convert to Judaism. (She converted twice — Reform and Conservative.)

Maya Rudolph is the daughter of a Jewish father and an African-American, mother who is not Jewish.

Elizabeth Banks, who is still married to her Jewish college sweetheart, converted to Judaism.

Ben Feldman, who plays the first major Jewish character on Mad Men, “Michael Ginsberg,” is the son of a Jewish father and a non-Jewish mother. (He was raised in his father’s faith.) Before Mad Men, he was best known for being a regular (“Fred”) on Drop Dead Diva. Back in 2005, he played the son of Jewish actress Fran Drescher on the short-lived WB network series, Living with Fran.

Jay Roach (Game Change) has an impressive list of film credits as a director and as a producer, including the Austin Powers movies, the Meet the Parents movies, and Recount, the award-winning HBO movie.

Roach was born in New Mexico, and raised a Southern Baptist. In 1993, he wed Susanna Hoffs, now 53, the lead singer of the famous 80s band, The Bangles. Hoffs, who is Jewish, was the band’s lead singer. Roach and Hoffs have two sons and are still very much married.

In 2010, Roach was interviewed byTthe Jewish Journal of Los Angeles in connection with the release of the comedy film, Dinner for Schmucks, which he directed. About his in-laws, wedding, and conversion, the article says:

Roach remembers being at dinner with the erudite Jewish family of his future wife, Susanna Hoffs of the rock group the Bangles: “I imagined them looking at me, and I had a coonskin cap on — the hick WASP. I just didn’t think I was qualified for their level of sophistication,” he said. Roach need not have worried — his future in-laws were as accepting as Stiller’s were critical in “Meet the Parents.” Yet he felt like a “total misfit.”

“I loved my wife, and I really loved her family, and so I wanted to impress them. I always was coming up with jokes, or digging up knowledge about psychology and just overcompensating. … My father-in-law is a shrink, absolutely the least judgmental guy of all time.”? Roach converted to Judaism before their wedding in 1993 at Sephardic Temple Tifereth Israel; the marriage ceremony was officiated by Hoff’s grandfather and uncle, both rabbis. “I took it seriously,” he said of his conversion studies. “I found it so moving and meaningful.” (The couple’s two children, now 11 and 15, are being raised Jewish.) “There is something about my wife’s approach to life that I related to: being vigilant, which comes from previsualizing disaster almost all the time,” he added with a laugh. “I think that’s universal — we’re all in this pickle — but I think one of the great things about my wife, and Jews in general, is that there’s more openness about it; it’s vocalized more.”

I profiled David Benioff (Game of Thrones) in conjunction with a profile I did of his wife, interfaith actress Amanda Peet, now 40. Peet, the daughter of a Jewish mother and a Quaker father, wed Benioff in a Jewish ceremony in 2006. The couple now has two daughters.

The film Hemingway & Gellhorn, about the courtship and marriage of Ernest Hemingway and interfaith journalist Martha Gellhorn, was the subject of a long column item earlier this year. Barbara Turner, who is nominated as a co-producer of the film, also co-wrote the film. She is, by the way, the Jewish mother of actress Jennifer Jason Leigh.

Other Nominees with a Jewish Connection

Is there anyone who does not like Michael J. Fox? He’s a really talented guy, a great family man and he has shown incredible courage in his battle with early onset Parkinson’s disease. He’s worked tirelessly for Parkinson’s related charities.

Well, this good guy has some good news for all of us. Fox says his condition is now stable enough that he can return to regular series TV next year. As it says in an Associated Press (AP) article, his new NBC series will touch on his Parkinson’s struggles.

He told the AP:

I was just feeling better and things are working for me medication-wise, and I just thought, “Why don’t I take this opportunity to do it?” I wake up every day and I feel good and if I don’t go forward with something like this, it’s another day wasted when I should be doing what I’m doing.

The very handsome Jon Hamm, who plays the lead character Don Draper on Mad Men, is nominated again this year for Outstanding Actor in a Drama. Hamm, 41, who is not Jewish, will probably be nominated every year he chooses to continue in this role. As previously noted in this column, Hamm’s romantic partner since 1997 is actress Jennifer Westfeldt, 42. Westfeldt, whose mother is Jewish, identifies as Jewish.

Julia Louis-Dreyfus, 51, who is still most famous as “Elaine” on Seinfeld, is nominated for Outstanding Lead Actress in a Comedy Series for her work on the HBO’s, Veep. Almost from the time Louis-Dreyfus became famous, it was easy to find references to her paternal grandfather’s Jewish background in biographies of the actress. Her paternal grandfather, Pierre Louis-Dreyfus, was a top businessman and a war hero who came from a very distinguished and very wealthy French Jewish family.

It took me a long time with some help, to establish, via public records, that her American paternal grandmother was Jewish, too. I was able to determine, while the actress was still on Seinfeld, that her American mother came from a non-Jewish family.

I haven’t previously mentioned Julia Louis-Dreyfus in this column because, about 15 years ago, I saw a TV interview in which she said, flat-out, that she is “not Jewish.”

Then, in 2010, Jewish director Judd Apatow, 44, did a series of humorous public service announcements for the American Jewish World Service (AJWS), a charitable organization which helps people of every background. These ads featured many celebrity spokespersons.

Louis-Dreyfus has never disclosed, to my knowledge, what faith she was raised in, if any. However, she has made it clear that she doesn’t define herself as Jewish, or half-Jewish, or as a person of interfaith background.

San Francisco Symphony conductor Michael Tilson Thomas, 67, who is Jewish, is nominated in the Outstanding Music Composition for a Miniseries, Movie or a Special (Original Dramatic Score) category for the PBS special about his grandparents, Bessie and Boris Thomashefsky, legendary actors in the American Yiddish theater. The special is entitled: The Thomashefskys: Music and Memories of a Life in the Yiddish Theater.

You will notice that a “Frank Rich” is nominated as a co-producer of Veep, an Outstanding Comedy Series nominee. Yes, this Frank Rich is the same Frank Rich who used to be a columnist for The New York Times and now writes for The New Yorker.

Likewise, the Danny Strong nominated for writing Game Change is the same Danny Strong who co-starred on Buffy, the Vampire Slayer as “Jonathan Levinson.” He continues to take some small acting roles. But with the HBO film, Recount (2008), he made the leap that a lot of character actors try, but few succeed at — he became a highly respected screenwriter and earned his first Emmy screenwriting nomination.

I want to wish all my readers a Happy Rosh Hashanah.

Over the years, I’ve collected a number of Jewish celebrity anecdotes related to the solemn holiday of Yom Kippur, which this year falls on September 25-26. This collection has been published in several Jewish media outlets. One of my favorite stories, about Jewish composer Leonard Bernstein, goes like this:

Bernstein came from a family of Talmudic scholars, but was only moderately observant in his adult years. However, Bernstein would hire a taxicab for Yom Kippur and go around Manhattan “shul-hopping.” He did this because he loved to hear many different cantors’ interpretations of the traditional prayers.

Bernstein knew, of course, that riding was forbidden on the holiday, so he would have the cab driver drop him off a block away from each synagogue so that synagogue-goers would not see the famous conductor riding on the holiday.

His son, Alexander, commented that his father would immediately intensely concentrate on the service and the cantor upon entering a synagogue. He was carried-away, his son said, in a world of his own.