Hollywood Now: Welcome Charlotte Clinton Mezvinsky, Plus What to Watch 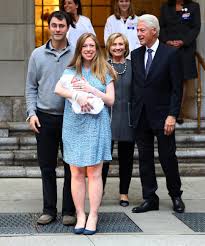 Chelsea Clinton leaving the hospital with Charlotte, her parents and husband

And the growing ranks of new interfaith moms includes Scarlett Johansson (her mother is Jewish) who had daughter Rose Dorothy with fiancé Romain Dauriac (not Jewish). And Christina Aguilera welcomed daughter Summer Rain with Jewish fiancé Matt Rutler. Most recently, interfaith couple Mila Kunis and Ashton Kutcher became parents to baby girl Wyatt Isabelle. The couple is engaged, and we’re keeping tabs on how they”ll plan their ceremony and raise baby Wyatt. But the highest profile interfaith offspring is none other than Charlotte Clinton Mezvinsky, newborn daughter of Chelsea Clinton and Mark Mezvinsky whose grandparents are former president Bill and possibly future president Hillary Clinton. Mazel tov to all!

Some of the best new TV shows aren’t on TV at all, but streaming on your computer and devices, as anyone with Netflix, Hulu and Amazon Prime knows. The latest stellar example is Transparent, a dark comedy about a divorced, retired professor and patriarch of a dysfunctional Jewish family who is in transition to becoming a woman (thus the title). Jewish actor Jeffrey Tambor (Arrested Development) shines in the role of Maura (né Morton) Pfefferman, who has three grown, self-absorbed children with their own sex, identity and relationship issues. 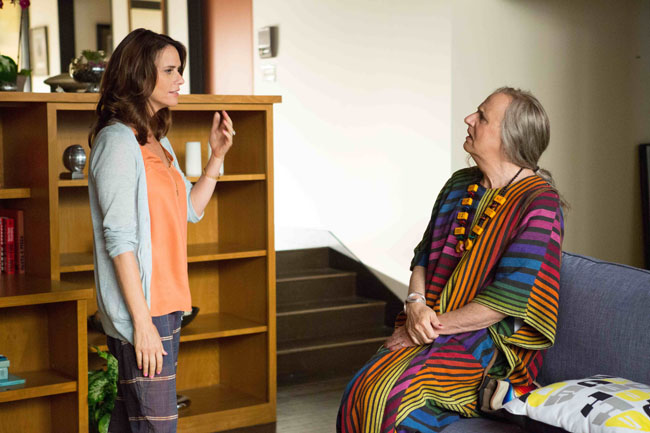 Amy Landecker (Louie) plays eldest daughter Sarah, unhappily married and having a lesbian affair. “It feels sexy and funny and meaningful, everything you’d want it to be,” she says of the show. Landecker, who has Jewish roots through her paternal grandfather “did Hanukkah and Christmas” growing up in Chicago, where she attended “a heavily Jewish school and went to temple more than church.” Her father has been married four times. “Most of his wives were Jewish. We had Shabbat dinners” she says. Surprisingly, her Jewish grandfather, a professor, married an Indiana farm girl whose father “was not a member of the KKK but did play in the KKK band.”

Landecker, who’s divorced with a nine-year-old daughter, has a Jewish boyfriend. “I’ve been going to Friday night services,” she says, and would consider converting to Judaism. “We’ll see. It would not be hard for me to do that at all. I would feel very comfortable with that. It’s how I self-identify, really. I’ve played a lot of Jews—in A Serious Man, I was the Jewish neighbor,” she points out. “It’s in me.” Transparent is now streaming on Amazon Prime. 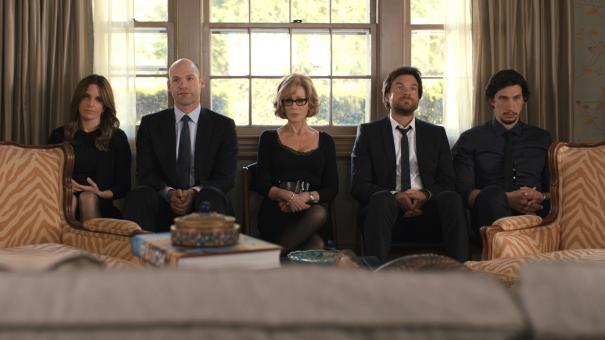 The incisively funny comedy This is Where I Leave You, now in theaters, is about the contentious relationships in the interfaith Altman clan, which intensify during a week of forced togetherness in the family home. Mom (Jane Fonda) isn’t Jewish, but when her non-observant Jewish husband dies, she tells her four grown children (Jason Bateman, Tina Fey, Corey Stoll and Adam Driver) that sitting shiva together was their father’s dying wish. There’s more button pushing than mourning going on as arguments ensue and secrets are revealed, but the movie has enough heart to balance all the sibling rivalry. 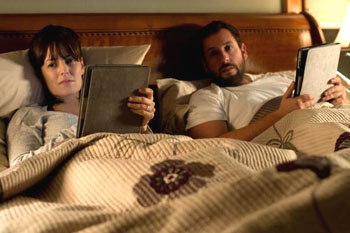 Audiences will see a different, more serious side of Adam Sandler in the movie Men, Women & Children, now playing in New York and L.A. and reaching more cities on Oct. 10 and 17. The Jewish actor, whose wife Jackie converted to Judaism when they wed 11 years ago, is one of several suburban parents of teens in the ensemble movie about how cyberconnectivity can seriously mess up your life. Jennifer Garner, Rosemarie DeWitt and Dean Norris also star.