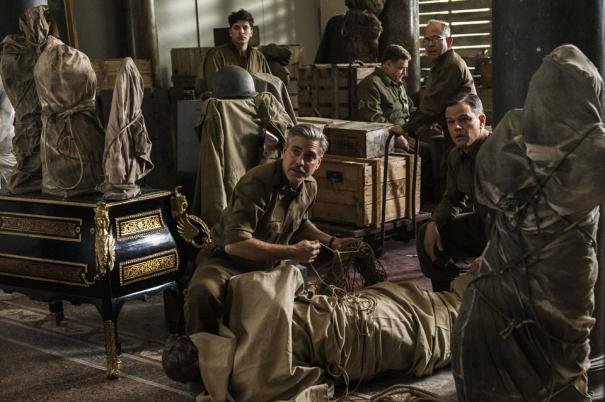 One of the little-known but no less important stories of World War II was the systematic, widespread Nazi plunder of Europe’s art, stolen from museums, galleries and the private collections of wealthy Jews. The efforts of a handpicked handful of art experts, museum curators and academics to rescue priceless treasures from Hitler’s clutches is the subject of the new movie The Monuments Men, directed, produced, co-written by and starring George Clooney. Also co-starring Matt Damon, Cate Blanchett, John Goodman, Jean Dujardin, Bill Murray, Hugh Bonneville and Bob Balaban.

Based on real people, though names have been changed, several of the characters are Jewish. Dujardin (The Artist) plays a French-Jewish art dealer, and Bob Balaban, the Jewish actor known for Moonrise Kingdom and Gosford Park, plays a character based on art historian and theater impresario Lincoln Kirstein, also Jewish. Dimitri Leonidas, a British actor of Cypriot heritage, plays Sam Epstein, a German-born Jew based on real—and still living—Monument Man Harry Ettinger, a teenage soldier recruited for the team as a driver and translator. A true example of interfaith cooperation, their mission shows what ingenuity, detective work and a little good luck can accomplish. 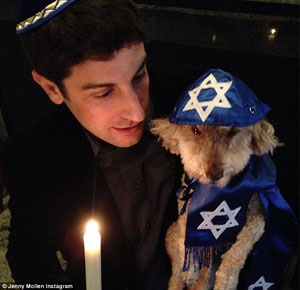 Although Jason Biggs has played Jewish characters in the American Pie series, Anything Else, Prozac Nation, and most recently, Netflix’s Orange is the New Black, he’s actually Italian-Catholic on his mom’s side, and of English non-Jewish heritage on his dad’s. Married to Jenny Mollen, a Jewish actress he met on the set of My Best Friend’s Girl in 2008, he’s no stranger to Jewish traditions. In fact, the couple celebrated their pooch Teets’ 13th birthday by throwing a “Bark Mitzvah” at the Sinai Temple in Westwood, California. The ceremony was good practice for another mitzvah about 13 years from now. Mollen is pregnant with their first child, a boy, due this spring. Mazel tov!

Best known as the silent half of the comedy magic duo Penn & Teller, Teller is the director of the fascinating documentary Tim’s Vermeer, in which non-artist Tim Jenison sets out to replicate Johannes Vermeer’s “The Music Lesson” to prove the theory that the Dutch Master used optical projection and mirrors in his paintings. About to direct a stage production of Shakespeare’s The Tempest, opening in April in Las Vegas, where Penn & Teller are the resident headliners at the Rio, he’s candid about his interfaith background. 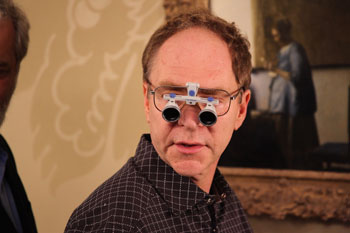 “I was raised as a sort of half-assed Methodist,” says the multi-talent, referring to his mother’s religion. Born Raymond Joseph Teller in Philadelphia, Teller’s father was of Russian Jewish decent, but not observant. “Sometimes we went to church…I decided I wasn’t interested in it. To me, what America is about is forgetting your heritage and defining who you are, and I think that was true of both my parents,” he reflects. Nevertheless, some cultural aspects of his Jewish side made an impact.

“My grandfather was enormously literate. He spoke Russian and taught himself English. He was an English literature nut. My interest in Shakespeare comes largely from the volumes of Shakespeare that he had. That’s a very Jewish thing, education and reading.” So is cooking. He remembers fondly, “My grandmother made really good soup.”

Penn & Teller will have a new TV show on the CW this summer called Penn & Teller: Fool Us, in which magicians try to trick them to win a spot in their stage show at the Rio.

Jerry Seinfeld’s ad for his Crackle.com Web series Comedians in Cars Getting Coffee, a Seinfeld reunion with Jason Alexander, was a Super Bowl sensation, increasing awareness for the show in time for the season’s final episode (posted Feb. 6) featuring Howard Stern. The Jewish radio personality’s wife Beth (who is not Jewish), an animal advocate, made a game day splash herself as host of Hallmark Channel’s Kitten Bowl.