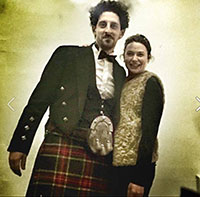 Scandal’s Katie Lowes and her husband, actor Adam Shapiro, had a very festive and memorable holiday season. Lowes, whose mother is Jewish and father is Irish-Catholic, and Shapiro, who is Jewish, celebrated Hanukkah and Christmas. “We made latkes and had a Christmas tree. We do whatever is fun and involves alcohol,” joked Lowes. The couple then rang in the New Year in Edinburgh, Scotland. “I love to travel. It’s a huge priority of mine. I had always heard about Scotland’s awesome New Year’s Eve party and I had to go. It was amazing. Highly recommended. We rented my husband a kilt, and he looked incredible.”

Scandal returns to ABC January 19 with an exciting season kickoff. “When we left off, Mellie Grant [Bellamy Young] and Senator Vargas [Ricardo Chavira] were running against each other. In the first 10 minutes you’ll know exactly who won the election.” As for her character Quinn Perkins, who serves as “gladiator and go-to gal” to Olivia Pope (Kerry Washington), “You will see more of that and you will get more of a taste of Quinn’s personal life. There are some big life choices that Quinn is going to make,” Lowes hints. “It’s a side of her we haven’t seen before.” 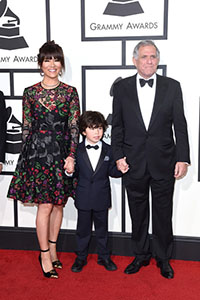 Julie Chen, the Chinese-American co-host of CBS’ The Talk and host of Big Brother, is married to CBS President and CEO Leslie Moonves, who is Jewish. Religion hasn’t been a problem in their 12-year marriage. “It was never an issue. It wasn’t even a topic until a close friend asked Leslie, ‘You’re going to ask Julie to convert, aren’t you?’ He said no.”

Although Chen comes from a Buddhist tradition, “My mother decided at age 17 that she wanted to practice Catholicism. I went to a Catholic high school,” she says. “But my parents did not pick my religion for me. I’m not a big organized religion person but I believe in God,” she says. “I believe in a little bit of everything.”

Her son, Charlie, is 7 now, and she and her husband “want to inform our child of everything out there so he can make his own choices. There’s a book called Who Was Jesus? and we want to read it with Charlie together. One thing that Leslie does want is for him to have a bar mitzvah. I’m all for it, if Charlie wants it. Right now he’s like, ‘I’m not adding a day of school on my weekend!’ so we’ll see.”