Elizabeth Banks is On Key 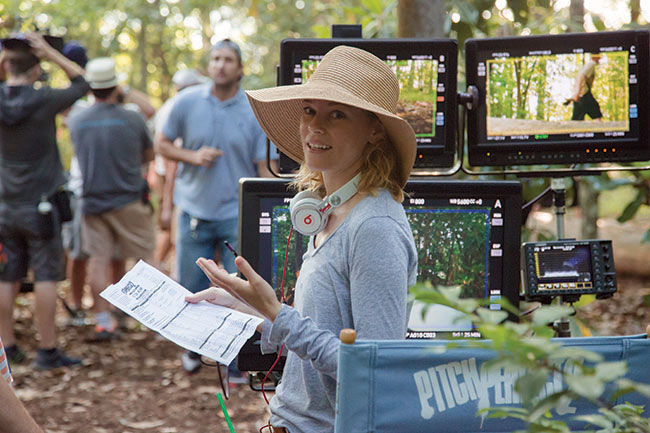 Elizabeth Banks is having a busy month, with two movies to promote—one blockbuster and one indie drama—both opening May 15. The actress, known for The Hunger Games and Spider-Man movies among many others, not only reprises her commentator role, but she also makes her directorial debut in Pitch Perfect 2, the sequel to the a cappella competition hit. She also stars in Every Secret Thing, out this month, a drama about a detective haunted by a case in which she found a missing child an hour too late, and vows that it won’t happen again. In July, she’ll appear in another highly anticipated sequel: Magic Mike XXL.

Banks, who grew up Catholic, adopted her husband’s Jewish faith. She met producer Max Handelman in college in 1992, and they married in 2003, after she studied Judaism with a rabbi. “I did not have my mikveh, so technically I’m not converted, but I’m already doing everything and I feel like I’m as Jewish as I’m ever going to be,” she has said. The couple, who are the parents of two sons, also work together: Handelman produced the Pitch Perfect flicks.

What to Watch this Summer

Jewish radio personality Howard Stern returns to the judges’ panel on America’s Got Talent, NBC’s summer variety competition that launches May 26. He’s been in an interfaith marriage to TV host and animal activist Beth Ostrosky Stern since October 2008. Actor Mark Consuelos, a good friend, officiated at their New York wedding.

David Duchovny, who is Jewish on his father’s side, with grandparents from the Ukraine and Poland (his mother is Lutheran, of Scottish heritage), returns to TV in the NBC drama Aquarius on May 28. He plays a detective in the ’60s-set series, which charts the rise of a petty criminal named Charles Manson.

Duchovny is also set to reprise his most famous role, Fox Mulder, when FOX revives The X-Files in January.

Something (or someone) sinister is secretly manipulating the children in ABC’s new drama The Whispers, and FBI investigator Claire Bennigan is on a mission to find out what’s going on. Lily Rabe, best known for American Horror Story, stars in the series, which premieres June 1.

Rabe grew up in a famous interfaith family. Her Catholic father is playwright David Rabe and her mother was the late actress Jill Clayburgh, whose father was Jewish and mother was Protestant.

Jewish actor Max Greenfield of New Girl and his wife, casting director Tess Sanchez (who’s not Jewish), are expecting their second child. They have a daughter, Lily, 5. Mazel Tov!