High Holiday Desserts for Vegans, The Lactose-Intolerant and Kosher-Keepers

NEW YORK (JTA)–A desire for a sweet new year, often expressed in honey cake and apple crisp, brings Jews with differing needs together on Rosh Hashanah, when the menu typically revolves around turkey, brisket or veal.

While most appreciate the flakiness of fine pastry that butter delivers, a growing number observe kosher laws prohibiting the mixing of dairy products and meat at the same meal. Some Jews eschew butter because of high cholesterol, or they are allergic to dairy products or cannot digest them well. Jewish vegans won’t eat meat, eggs and dairy foods for health and humane reasons. 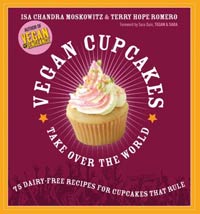 Yet these folks are united on one front–they want perfect endings to Rosh Hashanah celebrations.

In the past, Jews on special diets might cheat on holidays, sneaking a decadent dessert or two. Vegans were consigned to dry and disappointing pastry.

The kosher baker’s best option when meat was served was to replace butter with margarine, which traditionally yielded flat flavor and texture ranging from dry to gooey–sometimes in the same cake. But home bakers now can produce luscious desserts equal if not better in taste than their buttery counterparts without margarine.

Isa Chandra Moskowitz, a vegan and punk music aficionado since the 1980s, is a co-author of Vegan Cupcakes Take Over The World: 75 Recipes for Cupcakes That Rule (Marlowe & Company, 2006), her second cookbook.

While Moskowitz, 34, has been on the vanguard of American social and culinary movements, she has spent two decades experimenting with dairy-free baking. The results could revolutionize pareve pastries, raising them from a compromise to a contender when pitted against dairy desserts.

For ethical reasons Moskowitz avoids cooking with eggs, a boon to those with high cholesterol or an intolerance to the protein in eggs. In lieu of dairy products, she turns to full fat soy milk and non-hydrogenated coconut and canola oils. She imitates the silkiness of butter with tofu.

Don’t be scared off by these ingredients. One bite of her cupcakes will compel you to reach for more.

As a 14-year-old, Moskowitz didn’t want to feel deprived during dessert, so she sought ways to create pastry she’d want to eat if she weren’t avoiding butter, cream and eggs.

“Punk gave me a do-it-yourself spirit,” Moskowitz says. “I felt I could invent recipes even though I wasn’t trained as a chef.”

The experimentation led to successes and failures; she built on the former. She also had a marvelous role model.

“My grandma was a punk chef,” Moskowitz says. “I don’t know that she would have acknowledged the term, but at heart she was always breaking the rules and ignoring the instructions of her own recipes,” which were scrawled on sticky index cards. “She knew best what the pie crust needed.”

During two decades of trial and error, Moskowitz aced the chemistry of dairy-free baking. She learned that in most pastry recipes, when substituting oil for butter, less oil is needed than the butter measurement.

“There are structural differences between oil and butter,” Moskowitz says. “Oil doesn’t flake as nicely in pastries.”

To encourage flakiness, she keeps oil in the freezer for several hours before making dough. To achieve thick, fluffy frostings, Moskowitz sometimes relies on margarine, but only the non-hydrogenated variety, which doesn’t impart a chemical taste. She opts for the Earthbalance brand because it is free of trans-fats and dairy.

At the other end of the spectrum, Ann Amernick is the co-owner and executive pastry chef at the Palena Restaurant in Washington, D.C. She has written three cookbooks, including The Art of the Dessert (John Wiley & Sons, April 2007), an elegant collection of recipes fit for five-star restaurants.

Amernick was the assistant pastry chef during the Carter and Reagan administrations; she probably was the first Jewish woman to cook at the White House. At a kosher state dinner served to Israeli Prime Minister Menachem Begin, she prepared frozen, non-dairy sherbet cakes flavored by orange liqueur.

Experience has taught Amernick much about the dos and don’ts of dough.

“Don’t mix margarine into pastry dough of any kind,” Amernick says. “However, neutral vegetable oils have their place in professional baking. They perform well in cakes with heavy texture.”

Typical of this genre are honey, apple and carrot cakes, which are popular at Rosh Hashanah because they symbolize a sweet new year.

“I remember there was always apple cake and carrot cake on the table,” she says. “I loved the teiglach she made and a raisin-filled pastry, a kind of strudel.”

These sweet memories shaped her future. While oil marries well with sugar in dough, enhancing heavier pastries, Amernick has learned the two are not a winning combination in frostings. She recommends adorning pareve cakes with glazes, a mixture of confectioner’s sugar and freshly squeezed juice, either lemon or orange. But don’t expect glazes to be creamy and rich like frostings.

A supple liquid, they gracefully run down the sides of cakes, creating the quaint homey look seen in food magazine pastries.

These include the best fruits, vanilla, nuts, spices, even the finest flour. In oil-based cakes, she relies on ginger, cinnamon, nutmeg and brown sugar to excite the taste buds, replacing butter’s flavor.

She and Moskowitz agree that no matter the ingredients, the result must look stunning and taste irresistibly delicious.

Some may be surprised that Moskowitz’s cupcakes call for sugar, cocoa and real chocolate–no healthy substitutions there. But her goal has always been creating irresistible desserts.

“If you know what you’re doing, no one will miss the dairy,” she says. “Why should they?”

The following cupcake recipes are by Moskowitz and Terry Hope Romero from Vegan Cupcakes Take Over the World.

Preparation:
Preheat oven to 350 degrees. Line muffin pan with cupcake liners. Whisk together the soy milk and vinegar in a large bowl. Set aside for a few minutes to curdle. Add the sugar, oil, vanilla extract and almond extract to the soy milk mixture. Beat until foamy.

In a separate bowl, sift together the flour, cocoa powder, baking soda, baking powder and salt. Add in two batches to wet ingredients. Beat until no large lumps remain (a few tiny lumps are OK). Pour into liners, filling three-quarters of the way. Bake 18 to 20 minutes, until a toothpick inserted into the center comes out clean. Transfer to cooling rack and cool completely. Frost with Chocolate Mousse Topping (below). Yield: 12 cupcakes.

Preparation:
Crumble the tofu into a blender. Add the soy milk, syrup and vanilla. Puree until completely smooth. Set aside.

In a double boiler, melt the chocolate chips. Use a rubber spatula to mix the chocolate as it melts. Once melted, remove from heat and let cool for 5 minutes, stirring occasionally. Add the chocolate to the tofu and blend until combined. Use the spatula to scrape down the sides of the blender every so often. Transfer mousse to an airtight container. Chill for 1 hour before frosting cupcakes.

In a medium bowl, sift together flour, cocoa powder, baking powder and salt. Melt the coconut oil in a small saucepan over very low heat. Once melted, turn off the heat, but leave oil in the pan on the stove, so that it stays warm and does not solidify.

In a separate medium bowl, mix together coconut milk, sugar, vanilla and coconut extract. Stir in the melted coconut oil. Add the flour mixture in batches, beating well after each addition. Mix until smooth, then fold in the shredded coconut. Fill cupcake liners two-thirds full. Bake for 24 to 26 minutes. Transfer to a wire rack and cool completely. Frost with Coconut Pecan Fudge Frosting (below). Yield: 12 cupcakes.

Whisk rice milk mixture once more and slowly pour into the coconut milk mixture, stirring constantly to incorporate. Stir mixture continuously, until it darkens, gets very thick and smooth, and cornstarch is cooked, about 6 to 7 minutes. Remove from heat and beat in vanilla and bourbon, chopped pecans and coconut. Stir until everything is coated and completely combined. Cool to room temperature before frosting cupcakes.

The following recipes are from The Art of the Dessert, by Ann Amernick.

Sift the flour, baking soda, cinnamon, ginger and allspice into a bowl. Set aside. Place the eggs and sugar in the bowl of an electric mixer fitted with a whisk attachment. Beat on high speed until the mixture is light and fluffy. Reduce the speed to low and add the honey, then the oil. Mix on low for 2 1/2 minutes, then on medium for 2 1/2 minutes.

Fold in the flour mixture by hand in several additions, mixing well with a spatula. Spoon the batter into the prepared pans, dividing evenly. Bake for 30 to 40 minutes, or until domed, set and a cake tester inserted in the center comes out clean. (The loaves will crack during baking.) Don’t open the oven doors until the cakes have domed, as this could cause them to collapse.

Cool the loaves in their pans on racks for 1 hour. Unmold the loaves onto racks and wrap tightly in plastic wrap while they are still slightly warm to preserve moistness, until ready to serve. At room temperature, cakes will remain fresh for 3 days, or freeze them for 1 month. Serve with lemon sorbet. Yield: 10 slices per cake or 20 slices in all.

Sift the flour, baking powder, baking soda and spices; set aside. In the bowl of an electric mixer, beat the eggs, both sugars and vanilla using the whisk attachment. Beat at medium speed for 3 minutes. Lower the speed and slowly add the oil, beating continuously. The egg mixture will become thicker as the oil is added. Continue to beat for another 5 minutes. On the lowest speed, add the flour mixture in fourths. Mix well, then by hand, fold in the carrots, raisins and walnuts. Place in the prepared pans and bake 15 minutes. Rotate the pans and bake for 5 more minutes, or until the cakes have risen and are golden brown, firm to the touch and a cake tester comes out clean from the center.

Cool the cakes on a wire rack. Turn them out onto a plate or cake circle; coat the center of one cake with lemon glaze. Top with the second cake layer and allow the remaining glaze to coat the top and run down the sides. Yield: 8 slices.

Ingredients:
4 to 5 cups confectioner’s sugar
1/4 cup freshly squeezed lemon juice (or more or less to taste) (will require no more than one lemon)

Preparation:
Mix the juice with the sugar and stir well to combine smoothly. If the glaze seems too runny, add a bit more sugar. The quantities in this glaze can be adjusted for taste and texture.