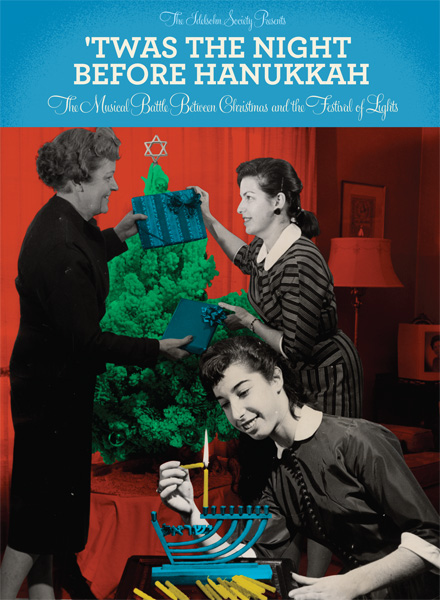 As many of you know, all the best Christmas songs were written by Jews. But what about Hanukkah songs? Many of us might be able to hum a few bars of Adam Sandler’s parody or “I Had a Little Dreidel,” but surely there must be more, right?

The Idelsohn Society for Musical Preservation (I hadn’t heard of them either), has just announced the release of an album that will highlight both Christmas and Hanukkah music, but with a twist: it’s bringing listeners through the holidays’ dueling history.

The collection tells a uniquely American story: once Christmas was declared a national holiday in 1870, the competitive campaign to beef up Hanukkah began. The obscure, minor Jewish holiday rapidly elevated: not only will we celebrate Christmas, we will create a rival holiday of our own to celebrate as well! You have one day of presents, we will have eight nights. But Jews could not resist the allure of Christmas, and for reasons of money-making, sentimentality, or a simple love for the music, every major Jewish performer cut a Christmas track. The result was a truly American phenomenon: a category of Christmas music, as sung by Jews, became a vital part of the holiday fabric.

I just listened to Dreidel, and was super impressed to find a Hanukkah tune that I hadn’t previously known.

The two disc album, ‘Twas the Night Before Hanukkah: The Musical Battle Between Christmas and the Festival of Lights, comes out November 15, and might be a fun way to lighten the December dilemma in our homes.

With a big thanks to our friend David at JewishBoston.com.