Did Zooey Deschanel Convert For Her Husband? Is That a Bad Thing? 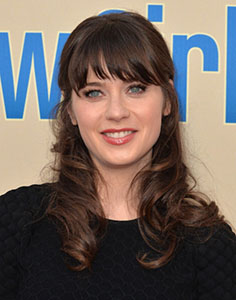 Is converting to Judaism “for” someone so bad after all?

As an avid follower of the hit show, New Girl, I couldn’t pass up an article in Us Weekly about its star, Zooey Deschanel, converting to Judaism. The headline revealed that she converted for her husband, producer Jacob Pechenik. “The things we do for love!” began the article, which went so far as to say that she “made a grand gesture” by deciding to join the Jewish people for him.

I know that many people within the Jewish community frown upon the idea that someone converted “for” someone else. We often have an idealized kind of conversion in our minds: Someone discovers Judaism on their own, learns about it and seeks a community, studies toward conversion until they are immersed in Jewish life and ultimately take the plunge into the Mikveh (ritual bath necessary for conversion by Jewish law). They might speak of having a “yiddishe neshama,” a Jewish soul that has found its rightful home. We especially love it when this conversion candidate far surpasses what Jews who grew up with the tradition know or practice.

This is a great image, and I have worked with dozens of such Jews-to-be over the years as a rabbi. It is incredibly gratifying to study with someone who is so drawn to our tradition. But it is not the way everyone comes to join our community. Since our earliest history, individuals have joined and strengthened our people because they fell in love. Abraham heard the call of God and became the first adherent to this new faith. But God didn’t speak directly to Sarah; she trusted her husband that this was a revolutionary way to live and a God worthy of uprooting her life.

She followed her husband.

Countless others followed, building up what we now know as the Jewish people. We would not exist were it not for all of the individuals who loved someone who was part of this community. Were they lesser? Would we challenge their commitment?

I work with so many interfaith couples in which a partner is considering conversion but battles with this notion that one might only be converting “for” someone else. My reply is, “Wow, you would consider converting to our tradition because you love this person that much? That is a beautiful thing.” I would never suggest or urge someone to make this commitment, but if they think it might be the right step for them, I hope they don’t get stuck on an image of what an “ideal” Jew-by-choice is like.

If they are passionate about this move, I want to support them without questioning their motives. I have to admit that I do have an ideal scenario in my mind. This person hopefully studies and begins to practice Judaism… along with their Jewish partner who, often times, may not know too much about Judaism either. Together, they discover meaningful practices along with a vibrant community that speaks to the home and life they are creating together. That process may feel spiritual, but it might also feel practical or logical. That is for each Jew to determine, and people who convert shouldn’t be held to a different standard than other Jews.

Of course, conversion is not for everyone. We have finally arrived at a moment in contemporary Judaism in which many communities and leaders view “fellow travelers” who have not chosen to convert as having an important role as members of the Jewish community. Anyone who enters the door to Jewish life should be welcome, no matter what their status. And, of course, no one should be coerced into converting. Ideally, everyone who decides to make the commitment to become Jewish is doing so on their own terms, even Zooey. But let’s not judge people’s decisions when they do follow someone into our tradition… let’s celebrate the fact that they love someone that much.

Have questions about conversion? Check out our conversion FAQ.