Where Are Your Kinsmen?

I recently officiated a wedding in which there were only a few Jewish people there (and I was one of them). 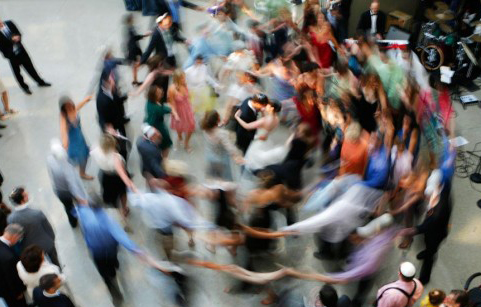 I had met the now bride a few years ago, when she came to me to study about Judaism. She had grown up with Christianity and as an adult was searching. She had always been interested in Judaism, loved the rituals and traditions, and felt she might be home with the people Israel. After a year of regular study, she went to the mikveh and formally cast her lot with the Jewish people. She lit the Sabbath candles and even taught in the early childhood room in the congregation where I was the educator.

A couple of years later, this Jew fell in love with someone who was raised Christian. She came to me again to officiate their wedding. I met with this couple several times to talk about the meaning of the Jewish wedding rituals and to unpack the Jewish wedding liturgy. This couple participated in InterfaithFamily’s Love and Religion — Online workshop. They were able to share with other couples about how they would weave Judaism into their lives and involve their Christian family in holidays and traditions. They had a small wedding of mostly family and almost everyone there were raised with Christianity.

When I stood with them under the chuppah and explained to all present about what they were going to see and hear, my fear was that it would feel anthropological in nature. That people were observing a Jewish wedding but would not be able to participate in it themselves. I was wrong. All present understood the meaning of the open chuppah being a symbol of their home, open to friends and relatives with unconditional hospitality. All understood the symbol of sharing a sip of sweet wine to be a symbol of the beauty of creation and the beauty of what this couple was creating. All understood the seven wedding blessings to be about affirming the potential in human beings to combine love, wisdom and courage and to forge a life of joy and gratitude. All understood the breaking of the glass to be about the fragility of life and finding joy within sorrow. All understood that Judaism had become meaningful not only to the bride, but to her supportive partner and that it could be accessible and meaningful to their whole family.

What I hope for this couple is that they find a Jewish community that can also support them. I have directed them to Jewish communal institutions that provide fellowship and classes for couples just like them. I will encourage them to participate in an Introduction to Judaism class sponsored by Reform Jewish Chicago. But it will be friends and Jewish lay and professional leaders who will help this couple sustain and strengthen their Jewish home and Jewish involvement.

I was meeting with Anita Silvert (who wears many hats in Chicago — she co-chairs Limmud Chicago (look for me there, details to come!) as well as directs a new program in Chicago called Chai Mitzvah). She was telling me today of her hopes to start a cohort of around eight people who are either in an interfaith relationship (either the Jewish partner or partner who isn’t Jewish) or people touched by interfaith families personally. This group would meet once a month to study Jewish texts and each would participate in social justice work throughout the year (serving a cause or charity of interest). Lastly, each would take on a new spiritual practice, guided by a mentor. As she was telling me about the program, she taught me a Rashi teaching from Numbers 5:8, “If a man has no kinsman to whom restitution can be made, the amount repaid shall go to the Lord for the priest…” Rashi, a medeival rabbi and important scholar, asks how an Israelite could possibly have no kinsmen, no family, no people. He concludes that this verse must be talking about the ger, a convert.

I could not believe how fitting it was that Anita shared this teaching with me exactly when I was thinking about this wedding of a Jew by choice. We need to make sure that all in the community have people, have kinsmen. That is our sacred and holy task.

If you would like more information about either our Love and Religion — Online workshop for interfaith couples or the Chai Mitzvah program, email me at arim@18doors-mly-1029-staging.mystagingwebsite.com.