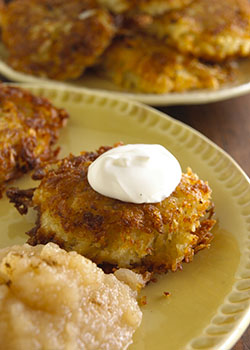 If you have just been asked to make the latkes for your child’s classroom during Hanukkah or the family thinks that you should be in charge of making the potato latkes for the first time, do not despair! I promise you this year you will make the best latkes you, or anyone else has ever had (and that was a quote from the head rabbi of the URJ after he thanked me for my “Tina’s Tidbits”!).

Although there are many stories associated with the triumph of the Maccabees and the redemption of the Holy Temple from the hands of the Syrian armies of Antiochus, the story of the one sealed bottle of oil for the Ner Tamid (everlasting light) in the Temple that lasted for eight days instead of one has been the foundation for traditional holiday cooking. Foods fried in oil have become synonymous with Hanukkah celebrations, especially in Europe.

However, most people do not know that potato latkes (pancakes) were created in the late 1700s and really didn’t take on the symbolism until the early 1800s when potatoes were readily available and raised geese were harvested for their meat and oil at the same time that the holiday was celebrated.

The following recipe, if followed step by step, will be easy to make (no peeling potatoes!), will NOT turn black, and will be crisp and fluffy, not thin and greasy.

One last tip: NEVER refrigerate latkes! Either leave them at room temperature until ready to serve in the evening, or freeze them. Either way, reheat the latkes for 7-10 minutes in a 425°F oven just until they are bubbly and crisp. Your family will praise you and your in-laws will be proud of you (and a little jealous!!!). 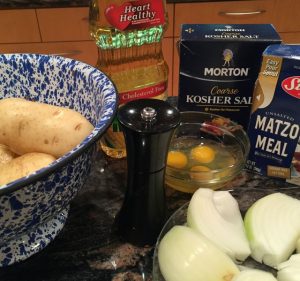 Watch a video fo Tina making these latkes with applesauce

1.  Grate the raw potatoes using the large grating disk on a processor or the largest holes on a grater if doing it by hand. Place grated potato in a colander, rinse with cold water and drain while you grate the onion.

3.  Change to the cutting blade on your processor. Add onions to the work bowl. Pulse on and off 5 times. Add ¼ of the grated potatoes to the onion and pulse on and off to make a coarse paste. Add to the egg mixture and stir to combine. 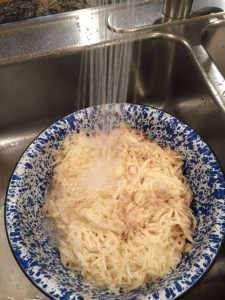 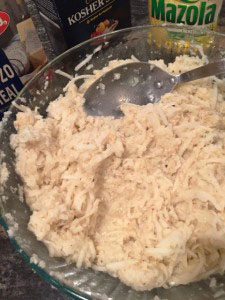 4.  Add the drained potatoes to the bowl and mix thoroughly using a large spoon or your hands.

5.  Heat a large frying pan or large skillet for 20 seconds. Add enough oil to cover the pan to a depth of 1/4 inch and heat for an additional 20 seconds. Drop mounds of potato mixture into the pan. Fry on both sides until golden. Drain fried latkes on a platter covered with crumpled paper towels. Serve with applesauce and sour cream. 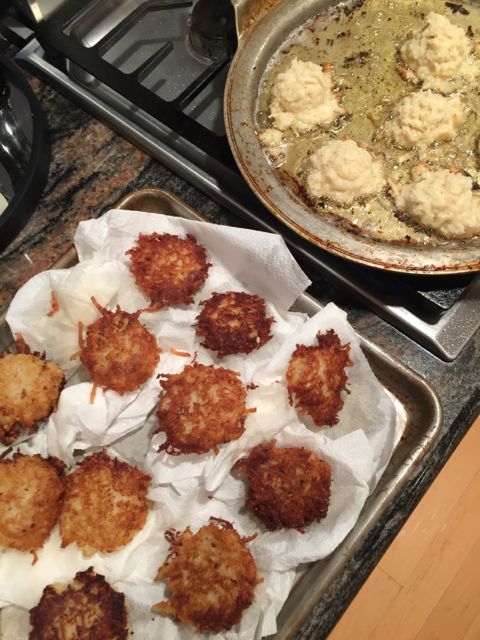