Sticking with Israel During Violent Times

*Names have been changed

My husband Charlie is a non-practicing Catholic and I am Jewish. From the get-go, we agreed to raise our children Jewish, which left the onus on me to further their religious identity and education. At my urging, Charlie agreed to travel to Israel this summer for our eldest son’s Bar Mitzvah. While Charlie was in full support of the education, ceremony and trip, he was essentially “going along for the ride.” Prior to leaving, I was concerned that our impending travels might be boring or “too Jewish” for him.

Boring turned out not to be an issue. Shortly before our departure, tensions were rising between Israel and Hamas. There were localized riots and violence, but at the time, we had no idea how quickly it would all escalate to a full-scale war.

After much planning, we arrived in Israel, and spent the first couple of days unwinding in Tel Aviv. We then spent another day or two getting to see more of the country, while gaining a better understanding of the mindset of the Israeli people. Up until this point, the increasing violence hadn’t touched us directly.

Then we arrived in Jerusalem. That evening, while leisurely strolling through Mamilla Mall, an air raid siren went off. We had no idea what that meant, or what to do. We saw civilians and soldiers all running in one direction. We were herded into a bomb shelter, still having no idea what was going on. It was terrifying, to say the least. Eventually, the “all clear” was given, and life resumed. It wasn’t until afterward, when we were able to connect with friends and get online that we learned Hamas’ rockets had reached Jerusalem, but were intercepted by Israel’s blessed Iron Dome. 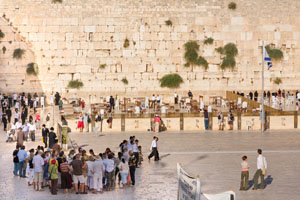 Two days later, we were at the Western Wall when another air raid siren went off. Once the alert is sounded, you have between 15 and 90 seconds to seek shelter. More people running; this time in all different directions. A large group of soldiers appeared out of nowhere, and were running as well. This time, we huddled under a doorway as we heard explosions all around us. As it turned out, some of the explosions we heard were rockets being intercepted above us, but some were firecrackers being shot up simultaneously. My guess is that someone was just trying to scare everyone even more.

Two days later, rockets were again fired in our direction, and everyone gathered in the stairwell of our hotel until the all-clear was given. At that point, I was very concerned about our safety, and mentioned to my husband that I thought we should discuss the possibility of heading back to the States early.

I was surprised and moved by his response. He said, “We CAN’T leave now. We need to see this through. If Jews ran away every time someone tried to hurt them or persecute them, there wouldn’t be any of you left. I wouldn’t have a family! It’s important that we stand in solidarity with the Israelis right now.” I was inspired. We had only experienced a few days of this kind of fear, but there are too many Israelis who live this nightmare continuously.

During the following week in Jerusalem, we met several locals who expressed their gratitude for our presence as tourists during this tumultuous time, and collected a few friends along the way. A highlight was spontaneously singing and dancing with soldiers at The Wall on Shabbat. That spoke volumes to me about the people of Israel’s passion and determination to keep “living” despite their pain.

The final day of our trip arrived: the day of our son’s Bar Mitzvah. It was a beautiful and intimate ceremony atop Masada; just magical. For the grand finale, Charlie gathered our small group together with our arms around each other, and told us all how moved he was by our adventures during the past two weeks. He said that he never understood how special Israel was until he came to know the country and her people firsthand. He said how proud he was, not only of our son the Bar Mitzvah, for all of his hard work and preparation, but of all of us for seeing the journey through, and celebrating life despite so much ugliness around us.

I am ever grateful to Charlie for recognizing how powerful a trip like ours would be to his Jewish wife and children, and as an added bonus, he ended up being just as moved as we were by the whole experience! On the flip side, I found that traveling with my Catholic husband made me appreciate the Christian holy sites in a whole new way.

I highly recommend an interfaith all-family trip to Israel. Regardless of one’s religion, any traveler can sense how sacred the space truly is. I feel even closer to Charlie after experiencing such high highs and scary lows together in our mutual Holy Land. Oh, and if you go, don’t miss out on hummus and shwarma from a street vendor. THAT experience is close to holy in its own right!