Should We Raise Our Child Jewish, Christian, Both or Nothing?

The Seesaw is a new kind of advice column in which a broad range of columnists will address the real life issues faced by interfaith couples and families. Join the discussion and you can email your quandaries, which will remain anonymous, to: seesaw@forward.com. This edition of The Seesaw features InterfaithFamily Parenting Blogger Jane Larkin. Click here to read the other responses. 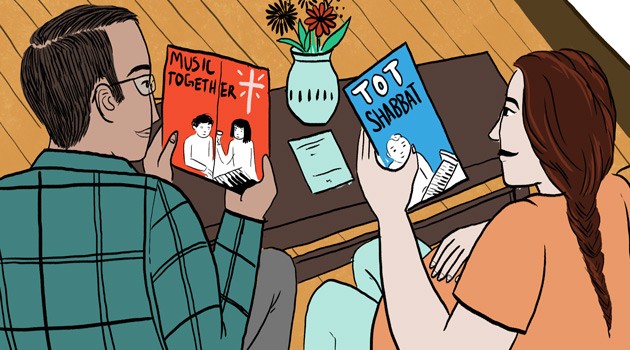 We Don’t Agree About How to Raise Our Unborn Child

We are an interfaith married couple expecting our first child. She was raised Jewish and wants to raise our daughter Jewish because she doesn’t believe in both. She would rather do only Jewish or Christian or nothing — though, of course, she strongly prefers Jewish both because it is hers and it is a beautiful tradition that is shrinking. He was raised Protestant and thinks there is no problem in raising a kid with both and allowing them to decide when they grow up. Seesaw, what do we do? (Besides love our child. We know that part.) —Baby on Board

JANE LARKIN: My husband and I were faced with the same challenge as you. Like you, the wife, I wanted a Jewish home. Like you, the husband, my husband wanted to do both.

To find a solution, we took a class taught by a priest and a rabbi. Both clergy strongly recommended that we chose one religious identity for our home and made us consider the decision from a child’s perspective.

The priest said, “Your child is asked to make one winter holiday art project. She must choose red and green paper for Christmas or blue and white paper for Hanukkah. This appears to be a simple choice. But for a child being raised in a home with two faiths, with no clear religious identity, this isn’t a choice between colored papers, it’s a choice between mommy and daddy. That’s a decision no child wants to make.”

The story made us consider how our decision would affect a child. We understood that children didn’t have the developmental toolkit to make a choice about religion, and by choosing one identity we’d be able to provide a framework for imparting the values that we wanted to instill. We realized that a single faith wouldn’t prevent our children from having full knowledge of their religious background. Rather, it would provide a basis from which to discuss the commonalities, differences, and intertwined history of Christianity and Judaism.

Ultimately, we chose to raise our son Jewish. But, we celebrate non-Jewish holidays with our extended family and engage in discussions about religion with all our relatives.

Raising your daughter in a single faith won’t stop her from enjoying all of your extended family’s traditions, or exploring and questioning faith later in life. Rather, a clear religious identity will give her a foundation from which to make educated decisions, and accept or reject religious ideas as she matures.

Jane Larkin is the author of “From Generation to Generation: A Story of Intermarriage and Jewish Continuity.” She writes about interfaith relationships and Jewish living for InterfaithFamily and other outlets. Follow her on Twitter @JaneLarkin6.

Read the rest of the responses to this question here

The Jewish Daily Forward is a legendary name in American journalism and a revered institution in American Jewish life. Launched as a Yiddish-language daily newspaper on April 22, 1897, the Forward entered the din of New York’s immigrant press as a defender of trade unionism and moderate, democratic socialism.