I am going to admit to something that I would not normally cop to in such a public forum.  I watch Private Practice.  It is a guilty pleasure.  In the show, Cooper (Jewish) is married to Charlotte (Christian).  They are pregnant with triplets, and the topic of what religion to raise the kids comes up. 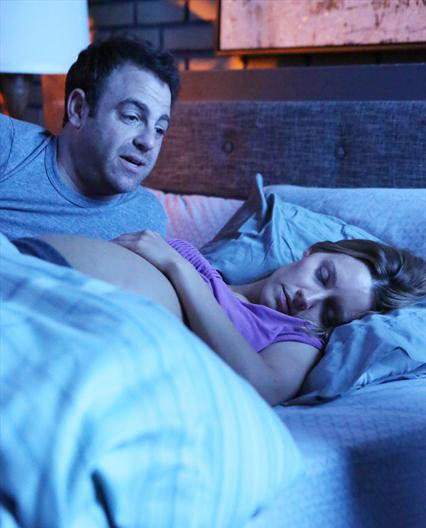 It is discussed for 2 minutes (which we all know in tvland is a deep heartfelt discussion) and they decide to expose the kids to both and let them decide.

My television still works.  I did throw everything I thing I could reach from my nest of blankets at it though.  My husband is so glad I was too tired to knit, so I was not armed with pointy sticks.  All I had near me were old magazines and papers, not a good weapon to be found.  That will teach me to clean.  I was disgusted.  Really?  We will let the children decided.

My poor family had to listen to me yell at Cooper and Charlotte and tell them that they are massive wimps.  Make a decision (there may have been more colorful language here, but this is a family blog).  Seriously, you are the adults and you can’t decide so you abdicate the decision to your children?  After I calmed down a bit, my kids asked me why I feel so strongly about this. (They were not watching with us, but came down when they heard the ruckus.)

First, one reason they gave for doing both was that the kids would be denied the other parents religion.  Ok, I can see that is a very scary prospect.  Seriously, I almost didn’t get married because of that.  I understand.  But, in reality, you can still celebrate and expose your kids to both, without identifying them as both (or really nothing).

My kids very strongly identify as Jews.  Yet, they happily go to see my family every year for Christmas.  They know it isn’t their holiday, but that does not mean you cannot enjoy it.  Just like we invite Christian friends to have latkes and share in a Passover Seder.

But, the real reason it irritated me so much is that by raising the kids as both, you raise them as nothing.  You put your child in the position that you found yourself in, having to choose one parent over the other.  Imagine how that must feel?  Life is hard enough without having to choose which religion you want to practice, while potentially alienating one of your parents.  That is why the parents need to choose.  Best if you do this before you get married, because really if you can’t agree it will become a deal breaker.

My husband pointed out to me as we wrestled with this decision, that you cannot be a Jewish Christian.  They are separate religions.  In order to do one of them well, you cannot be the other.  I am not advocating one way or the other, but I am saying CHOOSE.  When the rabbi told me that he didn’t care what decision we made just that we made one, the reality of this situation was brought home to me.

The statement that people make of “I will let the kids choose,” tells me that they recognize that a choice needs to be made.  But, for some probably highly logical reason, the adults in the family did not want to make it.  We make thousands of decisions during our kid’s lives that have immeasurable impact on their development.  Some right, some wrong, many without so much as a second thought, I would like to encourage everyone to make this choice for their kids.  Let them have an identity.

It was ugly at my house as all of this went down.  When the child that the couple already had said, “I like being both, double the holidays, double the presents.” I had to turn the television off.