Orpah: A Shout-Out for Shavuot

Like many of my friends who have chosen to convert to Judaism, I frequently find myself, during certain liturgical moments, listening for what my friend Danielle refers to as “the convert shout-out”—that all-important reminder to our collective faith community that we are all responsible for welcoming the stranger, “for you, too, were once strangers in the Land of Egypt.” 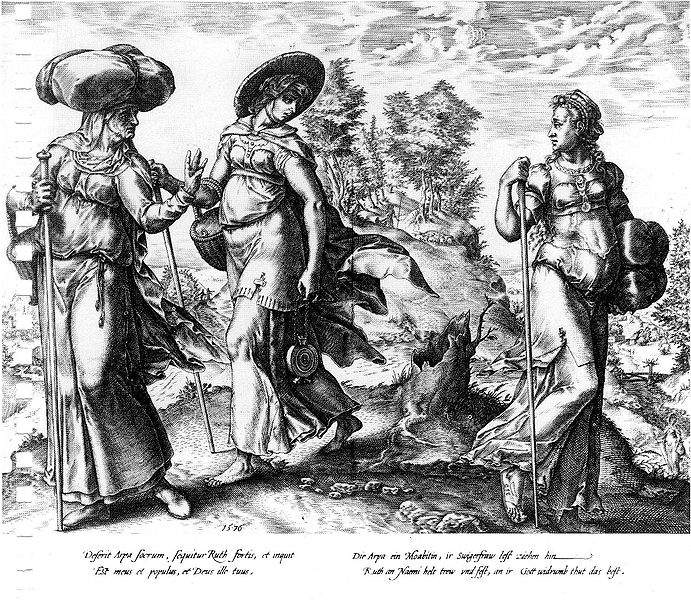 “Orpah leaving Ruth and Naomi,” an etching by Hendrick Goltzius from 1576.

This commandment, ahavat ger, you shall love the stranger, appears no less than thirty-nine times in the Torah, more than any other commandment. It’s an obligation that I take seriously. At Larchmont Temple, my spiritual home, I was made to feel welcome immediately; as a URJ Outreach Fellow, I’ve learned a lot about how important that welcome can be to those who might otherwise feel alienated or unwanted.

As a convert, a Jew-by-choice, a giyoret, all of the names given to one who chooses Judaism?I remember vividly what it was like to walk into our sanctuary as a stranger. With this in mind, I often struggle to settle into an emotional context in which I can balance the pride I take in having converted against the desire to fit in, to blend into the crowd. In essence, to be Jewish like everyone else.

At a Passover seder this year, in the company of two bright, dynamic young women who are in the process of conversion, we talked about the significance of being a convert and the boundaries that we face in feeling authentically Jewish, and yet the immense pride in the fact that we, too, stood at Sinai, not in a special roped-off section reserved for converts, but shoulder to shoulder with all of the Children of Israel.

And so Shavuot, the festival commemorating the sacred moment when the Jewish people received the Commandments at Mount Sinai, is, for many Jews-by-choice, the time of the penultimate shout-out. For at this time many congregations study the Book of Ruth, one of the most commonly studied conversion texts.

A couple of years ago, right around the time of Shavuot, I was asked to attend a multi-congregational study session during which the participants would be turning their attention to the Book of Ruth. Knowing the content of the text quite well, and feeling awkward about what my role would potentially be, I became a little worried. I wondered why I was being asked to contribute, and secretly I hoped that it was not only because I had converted. I figured, however, that no matter what transpired, the evening would merely be a chance to spend time with people I knew and liked, while studying one of my favorite texts.

That evening, as the group delved further into the text, I became aware of someone that I hadn’t ever thought about before: Ruth’s sister-in-law Orpah. I had never noticed the beautiful symmetry of Ruth’s and Orpah’s choices; one woman who chooses to enter a new community, balanced against another who chooses to return home.

It made me remember the many times, during the thirteen years that my conversion process ultimately took, when I, too, felt like Orpah, seeking the comfort and familiarity of home at times when I felt alienated or fatigued by my Jewish journey. For there were moments, places, and people — like the ex-boyfriend who said that conversion wouldn’t make me “Jewish enough” to marry or the rabbi I met through work who criticized my parents’ interfaith marriage as an example of what was destroying the Jewish community — who made me feel as if conversion would be a hopeless, futile act. And for me, during those moments, the lure of “returning home” was strong.

When I did finally convert, I realized, looking back, that it had not been a straight line from Christianity to Judaism. It was full of starts and stops, steps both forward and back. But during my journey I had experienced many transformative moments; and it was during those moments that I truly changed from feeling like Orpah to becoming more like Ruth. Welcomed by a thoughtful and receptive congregation, inspired by a rabbi whose knowledge is outweighed only by his kindness and understanding, and respected by a family that honored my choice to become a Jew, my road was made smoother by the love and care of those who embraced me on my journey.

When we finished reading the text, I heard my name called out: “So, Andi, as a convert, what do you think we as Jews can learn from the story of Ruth?”

A couple of dozen eyes looked at me expectantly. “Actually,” I said, “I think there is a lot more to be learned from the story of Orpah. Ruth had the strength to follow Naomi, to make sacrifices, to learn all the complex lessons of becoming part of a new community. But for every Ruth, for every person who comes to the Jewish people of her own volition, for every convert who makes it through the process, overcoming the obstacles to belonging and feeling at home, how many Orpahs turn away, feeling as if they will never belong? It’s easy for us to ‘love the stranger’ who loves us back. But maybe Orpah didn’t feel that she would be genuinely loved. Perhaps she feared the bitterness of Naomi, or the difficulty of the journey ahead, or the hostility she might have faced upon arriving. The question is not so much what we can learn from Ruth. I would ask, instead, what can we do to help Orpah find the courage and confidence to make the journey?”

There was silence. Some people were smiling broadly; others were shuffling their photocopied pages. But I felt triumphant. A lively discussion ensued, and many people, afterwards, told me that in all of the years they had known the story of Ruth, they had never given much thought to Orpah. “I always felt like we were doing such a good job of being welcoming, because of Ruth,” one friend told me, “but now I find myself thinking of people who came to my synagogue once, and never came back. I wonder now if I could have changed that outcome.”

As I left that evening, I felt that I had done right by both Ruth and Orpah by recognizing Orpah’s vulnerability right alongside of Ruth’s determination. I hoped also that I had enabled those present to understand that it is only through our love for the stranger, not only for the person who chooses, but also for the one who might be too afraid or hurt to choose, that we may give the stranger the courage to love us in return.