My Kids Are Jewish, With or Without Christmas

As the only Jewish kid in my small town in Pennsylvania, Christmas was the loneliest time of year. Most of my classmates, and even some of my teachers, were almost entirely unfamiliar with Judaism. Perhaps if I’d been braver, I could have explained to them why I felt uncomfortable singing “Christ the Savior is Born” in music class, or painting Nativity scenes in art or writing notes to Santa in writing class.

But, I was shy kid. And I’d had enough pennies thrown at me and been accused of killing Jesus too many times to speak up. So I laid low, hummed along, asked Santa for a puppy.

Still, the loneliness remained. One of my earliest memories is of driving home with my parents on Christmas Eve. Each time we passed another sparkling house, another lit up Christmas tree, another window full of smiling children, I shrunk a little further into my seat. By the time we got home to our own dark house, I was so heartbroken that I went straight to bed.

To my young soul, it felt like a punishment. It was as if I’d done something wrong to be missing out on all the fun that every other kid I knew got to enjoy.

When I would ask my mom if we could put up a tree or have a special dinner on Christmas, she would get upset. Christmas might seem like an American holiday, but at its heart it was a celebration of the birth of Jesus. Celebrating a man as if he were God would be breaking the first commandment, and perhaps even worse than that, assimilating.

It was difficult, as a kid, to understand what was so terrible about assimilating. What could be bad about getting presents, hanging lights and singing songs? It’s not as if celebrating Christmas would negate being Jewish. It would just be a way to feel part of a world that seemed to include everyone but me.

It wasn’t until college that I met other people who didn’t celebrate Christmas. The first Christmas eve I spent with my Jewish friends was liberating. We ordered Chinese food, watched movies, and reveled in the joy of being together. 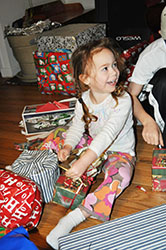 I felt a deep sense of belonging and pride and a little bit of confusion to be celebrating Christmas with other people who didn’t celebrate Christmas. Because, really, that’s what we were doing. It may not have been with songs of Jesus or presents from Santa, but there we were, all gathered on the supposed day of Jesus’ birth, having a grand old time.

Was that assimilation? I wasn’t sure. But, whatever it was, it wasn’t lonely.

When I got married to my husband who is not Jewish, my feelings on Christmas were still shaky. By that point I’d experienced several Christmases away from my family—some with my Jewish friends, some with my husband-to-be and his family. Each celebration had been vastly different—but they all included one important element—community. Just being with other people, whether we were eating Chinese food or belting out “Rudolph The Red Nosed Reindeer,” kept Christmas from feeling lonely.

Still, I had difficulty envisioning what Christmas would be like when we had our own kids. Was it important to keep Christmas out of our house completely? Would that alienate my husband? Make my kids feel that same aching loneliness that I felt as a kid?

We have three kids now, and our Christmas traditions have evolved over the years. Some years we go to my in-laws’ house and have a big dinner with family, and some years we stay home and order Chinese food. There’s no talk of Jesus or Santa, but there are presents and laughter and music and it’s never lonely.

It feels sometimes like I’ve copped out—given in to the assimilation that my mother was so fearful of. And, perhaps I have. But, the truth is my kids live in America and have a father who isn’t Jewish. Christmas is not some alien cultural phenomenon that they have to adapt to; it is an integral part of their world, their heritage. Celebrating Christmas is not so much assimilation as it is acknowledgment of the many components of themselves.

I feel confident in the strong Jewish roots I have given my children. They’ve whispered prayers into the Western Wall in Jerusalem, they’ve learned the aleph, bet and stories of Jacob and Isaac in Hebrew School, they’ve helped me clean the house of chametz on Passover and light the menorah on Hanukkah.

My kids are Jewish—and, if one day they chose to take a different path, it won’t be because they enjoyed a joyful night with family at the end of December.

Lela Casey is a mother of three children living in Bucks County, PA. Being raised by a fiery Israeli mother and a gentle farmer in the middle of nowhere lent her a unique perspective on Judaism. She holds degrees from both Penn State University and Rhode Island College. You can find her work on many websites including kveller.com, pjlibrary.com, elephantjournal.com, brainchildmag.com , and femininecollective.com.