Typically, when I tell friends, coworkers, and acquaintances how many siblings Anne has, responses range from “Wow,” to “God bless her mother,” to “Is her family Catholic?” 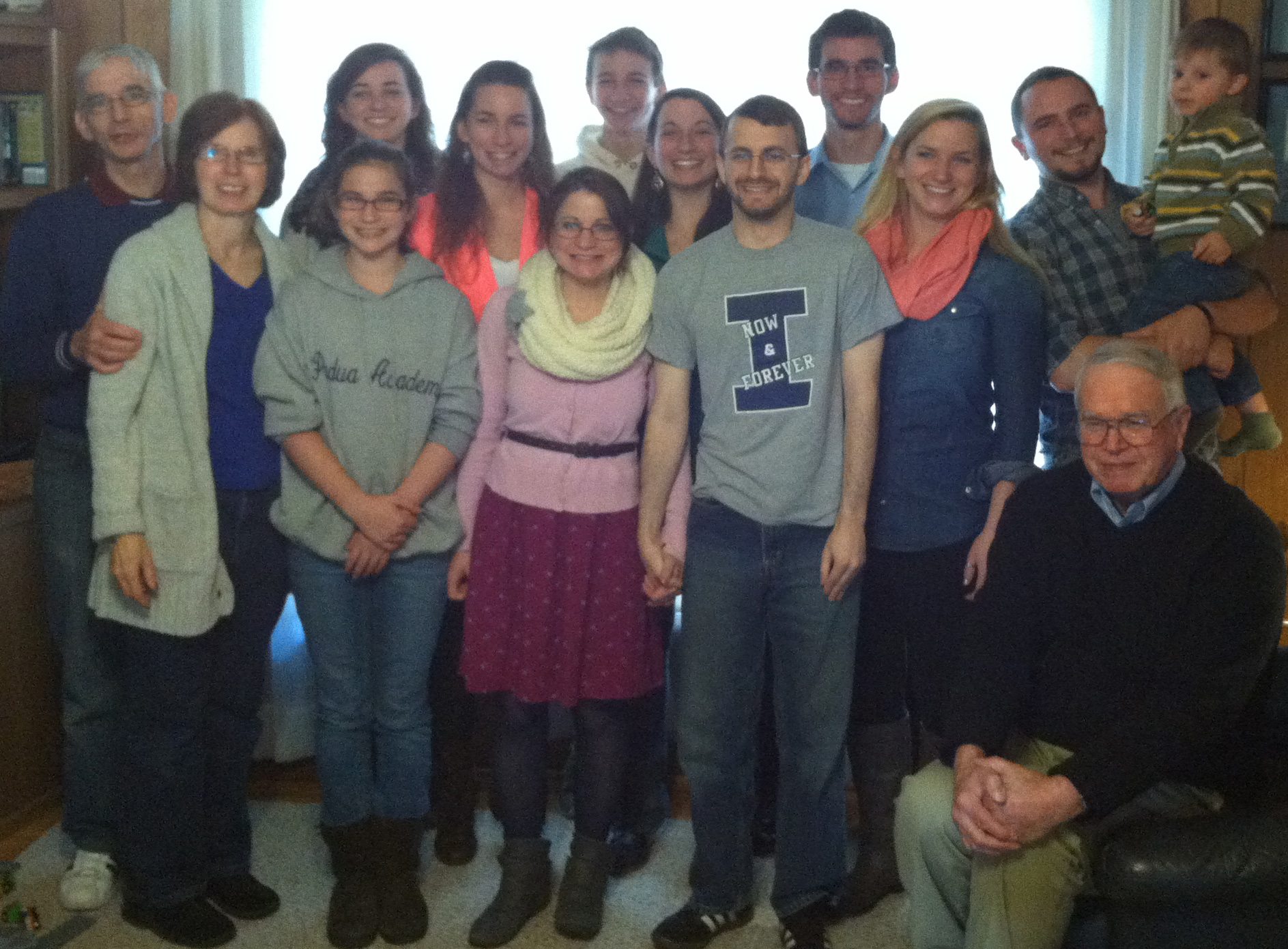 Luckily for me, I wasn’t introduced to all three brothers and six sisters at once, which would have been overwhelming. I first started meeting her siblings just a few weeks after we started dating. One of Anne’s friends was playing in a jazz band at a bar in Asbury Park, and Chris (second-oldest) and Stephanie (sixth-oldest) were in town. The subject of religion came up fairly quickly, as Chris was a former seminarian, having left high school to pursue a path towards priesthood. Although he has since left the seminary, Chris has a deep faith informed by his theological studies.

Every few weeks I’d meet more of Anne’s siblings. Theresa (the youngest, now 13) came up to see a show at the theater where Anne worked. Dave (the oldest, now 32) stopped by Anne’s apartment for dinner one night. I was on speakerphone when Nicole (eighth-oldest) called Anne to say she’d decided to attend Anne’s alma mater, studying in the same theater program as Anne had.

However, it was Anne’s parents who I was most concerned about meeting. We set up plans to gather at Yards Brewery for a tour and a pint with Chris, Michelle (fifth-oldest), and Anne’s mom and dad. In preparation, I looked up her father’s CV (he’s a professor of Mechanical Engineering at the University of Delaware), read through some of his recent research papers, and in general just tried to gather as much information as possible to feed potential discussions and avoid awkward silences. The outing went well – I bonded with everyone over music, and had plenty to talk about based on the venue and my hobby as a homebrewer.

The topic of my religion didn’t come up with Anne’s parents until a few months later, when I was invited to celebrate Easter with Anne’s family. As it fell during Passover, and I try to keep Kosher (-style) for Passover, Anne worked with her mom to develop a meal that I would be able to eat. While they did have a ham, rolls, and beer, there was also chicken, matzah, vegetables, and corn syrup-free juice. The additional foods – and my declining to drink beer, my normal beverage of choice – spurred quite a few conversations about Jewish dietary restrictions, both during Passover and at other times throughout the year.

Those discussions with Anne’s parents and siblings throughout Easter were all very respectful. I’d been concerned heading into that particular holiday that some of Anne’s family might try to attack my beliefs, and it was a huge relief when their questions were more directed towards gaining insight into the differences between our belief systems. This tolerance of and respect for my rituals and practices has continued as I’ve become closer with Anne’s family. This past Easter, Anne’s father asked me to say the motzi after he led the family in the Catholic grace before the meal.

I’ve enjoyed the process of meeting and getting to know Anne’s family. It took over a year for me to meet the last of her siblings – Laura (the fourth-oldest) currently lives in the Virgin Islands – and I met her over Christmas last year. Spreading out these introductions worked very well, limiting the number of new faces and names I had to remember at each meeting, and giving me the chance to have deeper conversations with her family members.

Last week, we took a road trip to Minnesota to meet some of Anne’s extended family. During this trip, I was able to meet her grandmother, 11 aunts and uncles, and 20 of her first cousins. Unlike the spread-out process of meeting Anne’s siblings, there were a few times during the trip when a few dozen relatives were hanging out at her one of her uncles’ houses. While some faith conversations did come up they all seemed to know that I was Jewish. Even when the topic came up, it was always a curiosity question, never making me uncomfortable. Her family, extended and immediate, is just interested in learning about my beliefs, traditions and lifestyle.

It’s been fun getting to know and share my faith with Anne’s family, and I look forward to continuing the process as I meet more of her relatives.