Life Lessons of The Purim Superhero

Have you heard the buzz? There’s a new children’s book out, just in time for Purim!

The Purim Superhero follows Nate, who is worried about being different from his classmates. They all plan to wear superhero costumes to their synagogue’s Purim celebration, but Nate would rather dress as an alien. Seeking advice from his two dads, Nate decides what to do. With help from his dads and older sister, he puts a fantastic costume together. 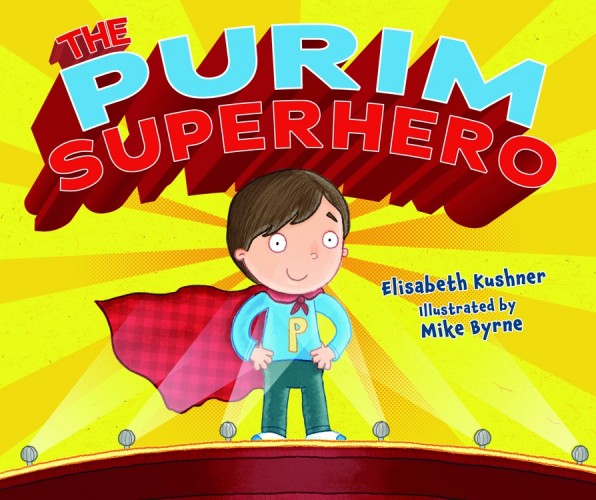 Instead of focusing on their “different” family, Nate’s Abba (“dad” in Hebrew) and Daddy use the Purim story to help Nate understand the strength that comes from being true to oneself, the power of being different, and what really makes someone a hero.

“Queen Esther saved the Jews because she didn’t hide who she was. She told Ahashuerus she was Jewish, and that her people were in danger,” Abba tells Nate. “Sometimes showing who you really are makes you stronger, even if you’re different from other people.”

Whether a family has two dads, a mom and a dad, a grandparent, or any other combination of adult(s) raising children, the application of the Purim morals to real-life scenarios works as a lesson for all. We encourage our children to own who they are and express who they are; it’s great for them to see that the lessons we teach them in their everyday lives connect to the lessons in our religious lives as well. And the book’s not just for kids. The message works for adults, too, who will likely relate to the parents’ struggles and gentle nurturing of their child.

Being an older sister, myself, I also appreciated the relationship between Nate and his sister, Miri. Instead of the sibling rivalry which has all but become standard in children’s books, these siblings support each other. Miri has decided to go as a rock star for Purim, presumably because she needs to express her inner-performer. She sets an important example for Max through his time of indecision. And, in the end, Miri is instrumental in the creation of Max’s “super” costume.

Purim, a sense of self, and family are the focus of the book; that Nate has two dads appears to be almost an afterthought (though it clearly is not). The author, Elisabeth Kushner, entered the book in Keshet’s 2011 writing contest. The Purim Superhero was selected by Keshet as an outstanding Jewish LGBTQ children’s book.

So how are kids reacting to the story? I had the opportunity to read The Purim Superhero to (and with) children ranging in age from 14 months to 7 years. Though that toddler is smart and sat quietly through the reading, he, unsurprisingly, didn’t have anything to say about the book. (He did smile a lot and point at the illustrations, drawn by Mike Byrne.) The other children all loved the book, and related on different levels. One shared that he has an Ima (Hebrew for “mom”) and Mom and liked that Nate had an Abba and Daddy. Another took the lesson of costumes seriously, understanding that wearing unique costumes can be courageous. A few of the kids identified Nate’s classmates as using “peer pressure” or “bullying” to get him to join their costume plan – which led to a great conversation about standing up for our own beliefs. More than one young reader told me they related to Nate’s situation.

Most children’s books for Purim offer a cleaned-up telling of the Book of Esther, the story on which the holiday revolves. It’s refreshing to find a story for kids that focuses instead on the lessons and morals of Purim and presents it in a fun and relatable way.

Stephanie Carey Maron is a New Yorker living in Brookline, MA. An actor/theatre-maker/acting coach/director/administrative whiz/television lover/film buff/everywoman/Jew all rolled into one, she acknowledges that her opinions are all her own.