This post is based on an article by Rabbi Copeland that originally appeared on jweekly.com 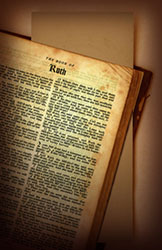 There have always been Jews-by-association. Nowadays this term, JBA for short, is becoming well known as a catch-all category for people who hang out with Jews, including people who gravitate toward Judaism, have many Jewish friends, or are partnered with someone Jewish. But the only thing that is new about the category is the name.

Throughout our history, there have been categories of people who cast their lots with the Jewish people but, for a variety of reasons, were never fully integrated into Judaism. Some may have wanted to become fully Jewish, others not. But common to all of them was that they walked a common path with Jews.

We are about to celebrate Shavuot, the holiday when we study the Book of Ruth. Ruth was a Jew-by-Association. She married one Israelite, followed her mother-in-law back to their people after his death, and then married a second Israelite. She is hailed as the first convert, but historically, conversion did not yet exist as a mechanism one could undergo to become part of Judaism. What she did do was utter the words, “Wherever you go, I will go; wherever you lodge, I will lodge; your people shall be my people.” [Ruth 1:16] She declared herself a fellow traveler.

But Ruth wasn’t the only one. A person who walked the path with us in the Torah was in the category of the ger toshav, the resident stranger who lived among the early Israelites and was to observe the same rituals and laws. There is even a rationale for treating the ger toshav like an Israelite: “The stranger who resides with you shall be to you as one of your citizens; you shall love him as yourself, for you were strangers in the land of Egypt.” [Leviticus 19:34] The presence of this group of people was perhaps a daily reminder of the lessons we learned from our enslavement.

These resident strangers were even included in the ceremony of covenant when the community heard the law from Moses in Moab [Dt. 29:9-11]: “You stand here this day, all of you, before YHWH Your God-your tribal heads, your elders and your officials…even the stranger within your camp—to enter into the covenant”. Just as they were not full Israelites, they were not considered foreigners either.

There was also the erev rav, the mixed multitude who left the slavery of Egypt along with the rest of the Israelites [Nu.15:16]. Later in our history, during the second temple period, there was a category of Jews-by-association called “God-fearers” who, like the other categories, were people who aligned themselves with the Jewish people. Since there was no such thing as conversion, such strangers among us were left as they were—people who clearly cast their lot with the Jewish people.

In our time, there are countless people who reside within Jewish communities who consider themselves fellow travelers. Now, we draw a sharper line between those who are Jewish and those who are not. As of the early centuries CE, we do have a way for people to become fully integrated into Judaism: Conversion. But as that category has become more and more solidified, there has been less and less space for people who don’t fit neatly into one group or the other.

Conversion should be celebrated. But we should also take time to celebrate those who would have fallen nicely into one of these historical categories as fellow travelers who do not wish to convert.

People walk the path with the Jewish people because they love someone Jewish or feel an affinity with Judaism. Many are helping to raise Jewish kids, keeping this tradition thriving into the next generation. As we celebrate Shavuot, let this season of Ruth be an invitation to appreciate our many fellow travelers.