Judaism through Food and Crafts 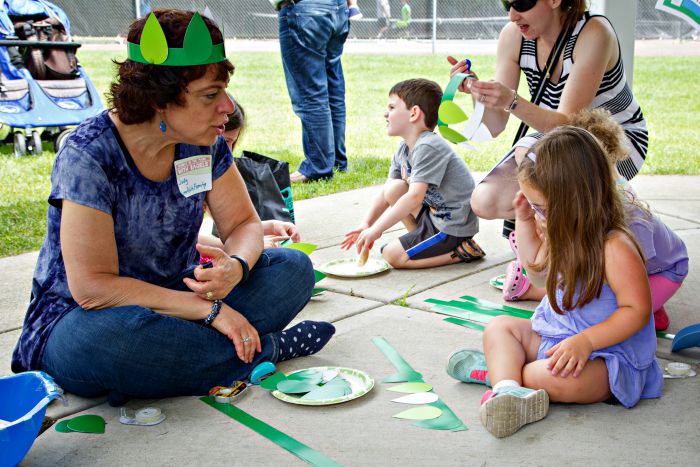 Recently, my family and I attended a “Sunday in the Park with Bagels” event sponsored by Big Tent Judaism, which appeared to be a consortium of Reconstructionist and Reform Jewish organizations, including InterfaithFamily.

I didn’t research the event beforehand and didn’t know what to really expect. Bagels were a great selling point, of course! But I thought it would just be few families camped out on blankets, eating bagels. I learned about the event from the IFF/Chicago’s Facebook group, and knowing how my family feels about bagels at any time of day, I knew it would be something we’d enjoy, particularly in a park on a nice sunny morning. I had no idea that we’d be a part of a very well-attended and well-thought-out morning of Jewish education and, yes, bagels.

When we arrived, we found more than a dozen tents, each hosted by a local Jewish organization and featuring a food and a craft activity based on a moment in the Jewish liturgical year.

The first table we visited was Rosh Hashanah, and Laurel jumped at the chance to decorate an apple with stickers and crayons, as well as stringing beads on it to make a necklace. We didn’t follow a regular order from table-to-table, as Laurel spent considerable time decorating her apple, and 2-year-old Holly preferred to wander much more speedily from table-to-table in search of games and, preferably, food.

Both children eagerly rolled blue paper around two toilet paper rolls, topped with silver tin-foil points, to make their own tiny Torahs. We found the promised bagels at the Shavuot table, where Rabbi Ari wore a paper crown with green leaves. She helpfully explained that the leaves were a reference to the idea that Mount Sinai had actually been a desert oasis. Both kids ate the bagels with relief and delight! Laurel made a crown, while Holly determinedly stuffed bean bags directly into the goal point of the bean-bag-toss game.

Nearby, we saw representatives wearing gold paper crowns on their heads, and guessed correctly that we’d found Purim. Holly focused on the hamantaschen at the table, while Laurel skillfully decorated the front and back of an appropriately abrasively noisy wooden gregor. We somehow avoided Sukkot, which offered falling-down sukkahs made of graham crackers and melting green icing (in a summery and sugary rendition of a Jewish gingerbread house).

By the time we worked our meandering way to the Shabbat table, I found myself fully in the arts-and-crafts mode, too. At the Shabbat table, the craft consisted of using permanent markers to decorate a challah cover, and I wanted to help little Holly not get permanent marker all over the wrong places (such as her clothes). I grabbed a cut-out of a challah, placed it on the center of the cover, and traced it. Holly scribbled big black lines along the bottom. I grabbed a candlestick and placed it just above and to the left of the challah, and traced it. I was about to trace a Jewish star when I decided it would be really strange not to add the second customary Shabbat candlestick to my challah cover, so I traced a second candlestick as well, and drew a couple of free-hand flames on each. Holly scribbled gleeful blue lines all over the orange challah in the center. When we finished, we all enjoyed a slice of challah to cap the experience.

Working side-by-side with my children, I found an open and accessible entry point into the Jewish childhood I never had, but which my children are clearly enjoying. This version of Judaism centered on food and crafts rather than Torah, Talmud and ritual observance. Certainly, the emphasis came in part from the types of Jewish organizations sponsoring the event, but the end result emphasized Judaism as something accessible and fun for the whole family, even for family members of a different faith. Some of the crafts my kids made, like the challah cover or the gregor, will likely serve a ritual purpose in our home. The crafts allowed even the youngest of children a way to enjoy the Jewish environment.

Even more so, food is the great equalizer. By eating together, people cement their shared allegiance. That morning, it wasn’t the food of kosher laws that brought people together, but the simple act of eating foods in a Jewish context—from the menorah dripped with too much icing and sprinkles to the off-season hamentaschen (Purim cookie). Food transcended both age and artistic ability: Everyone, of whatever age or background could enjoy a slice of challah or an icing-dipped graham cracker. No wonder the tote bag said “We ‘heart’ Jewish food!”