Although the majority of interfaith weddings involving a Jew are Jewish-Christian weddings, the number of Jews marrying people of many different religions is growing. While we can’t offer advice about all the possible combinations in this guide, here are a few resources for some of the more frequently occurring pairings.

As a religion of over a billion people, Islam incorporates a tremendous variety of cultural and religious practices. The best way to learn about the specific traditions, rituals and beliefs that are relevant to your wedding is for both partners to talk and learn together, and, whenever possible, to include family members in those conversations. 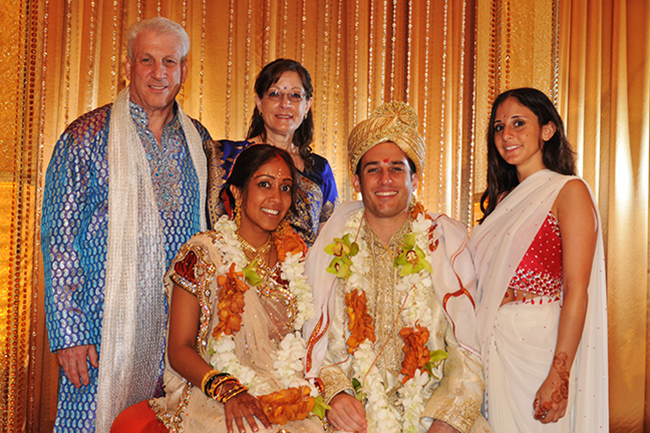 That said, there are some basic elements to most Muslim weddings. Just as there is a ketubah signing in traditional Jewish weddings, the signing of a wedding contract is a key element of Muslim weddings. There’s a ceremony known as nikah, in which a groom proposes to the bride in front of two witnesses and the bride publicly assents to be married three times.

The assumption in most online resources about Muslim weddings is that the couple is heterosexual. For same-sex weddings between Jewish-Muslim couples, finding supportive clergy and/or friends in both religious communities may be essential to planning your ceremony. One potentially helpful resource is the LGBTQI resource section of Muslims for Progressive Values’ website.

Because of the ritual simplicity of most Muslim wedding ceremonies, there’s lots of room for creative blending of Jewish and Islamic traditions. Some Muslim weddings include the recitation of the first chapter (sura) of the Qur’an, which is a brief set of verses asking God for guidance and offering devotion and commitment to God. One popular custom before the wedding, is for the bride to have a party in which her hands and feet are painted in henna: a custom also popular among Jews of Middle Eastern origin. Finally, 18Doors has an archive of articles by and for Jewish-Muslim couples. 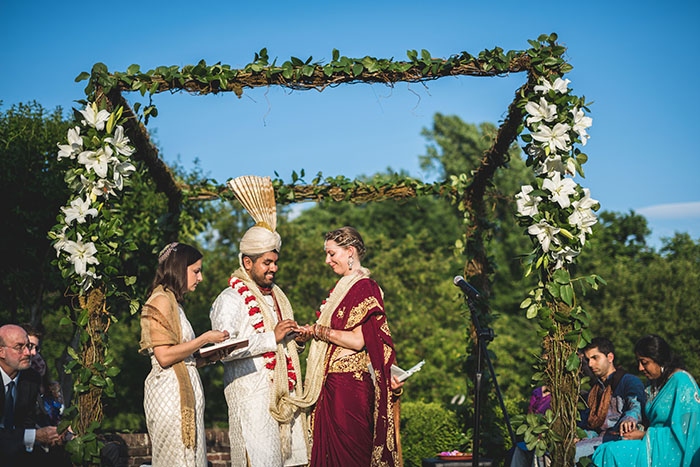 Classically Hindu weddings are officiated by a priest and can average three days, with different ceremonial elements taking place on successive days. In North America these weddings can be much shorter, though they are likely to last at least a few hours. As with Muslim weddings, many brides are painted in henna before the main wedding ceremonies. There are many customs and rituals involved in Hindu weddings, and the specifics of how both partners relate to their respective families may be a big factor in your wedding planning.

There are some Hindu wedding rituals that resemble Jewish ones, such as a wedding canopy and a ritual involving the couple circling around a fire seven times. Colorful traditional clothing and the symbolic offering of gifts to some of the Hindu gods are also aspects of the Hindu rites. Because Judaism is a monotheistic religion that traditionally frowns on “graven images” and making offerings to multiple deities, Jewish-Hindu couples might need to do some theological negotiating to plan a ceremony that works for them, and potentially for their respective families. Also, many rabbis, including those who co-officiate with clergy of other faiths, may have issues with polytheistic ceremonial elements of a wedding that blends Jewish and Hindu traditions.

As we become aware of good online resources for same-sex Jewish-Hindu couples, we’ll be happy to add links here.

Buddhism is practiced in dozens of countries by half a billion people. Buddhist wedding ceremonies contain little in terms of required rituals, but the specific culture of a Buddhist family can have many beautiful traditions and customs. A Buddhist wedding doesn’t require a monk, nun or other clergy, though couples may visit with a monk or nun prior to their wedding for guidance.

Because simplicity characterizes the Buddhist religious elements of a wedding, there’s lots of room for Jewish wedding customs and rituals to weave into a shared ceremony. If you’re hoping to involve a rabbi, be aware that some rabbis are uncomfortable with the presence of statues representing the Buddha in ceremonies they are helping to officiate, because of traditional Judaism’s prohibition on representing the Divine with images.

As we become aware of good online resources for same-sex Jewish-Buddhist couples, we’ll be happy to add links here.

The internet offers a wealth of resources describing the traditions and customs of weddings in every part of the world. You can read more about meaningful global wedding traditions here. Sometimes culture is an even bigger factor than religion. For example, Mexican or Japanese cultural wedding practices cover everything from clothing to music to food. While there can be complexity involved in planning your wedding, the opportunity for learning, curiosity, joy and excitement is remarkable. A number of websites offer general information about wedding traditions, including advice on etiquette for wedding guests.

A Final Thought: Should We Have Two Ceremonies?

Some couples decide to have separate wedding ceremonies in order to allow both of their traditions to be fully expressed. Sometimes couples do this if the family of one partner lives overseas and can’t travel. Other couples do it if they find they aren’t able to blend traditions into a single ceremony that satisfies them and/or other important people in their lives. This is a personal decision that comes with its own challenges and expenses. Read about one couple’s beautiful two-ceremony wedding here.