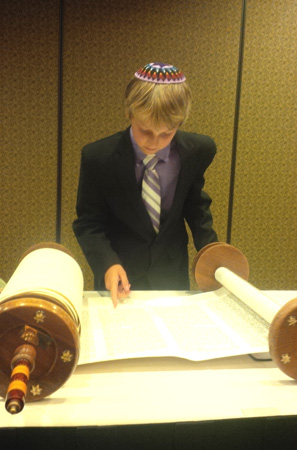 I recently had the honor of working with an interfaith family as their son, Jonah, prepared for his Bar Mitzvah. Here are his powerful words which describe what the study, process and ceremony meant to him. His family is part of a Jewish community that gathers for the holidays, and Jonah is excited to be able to read Torah again.

Here is what Jonah had to say:

“Shabbat Shalom! Thank you for supporting me and being with me and my family as I take on the role of becoming a Bar Mitzvah. Bar Mitzvah means son of the commandments. A child becomes a Bar Mitzvah whenever he chooses as long as he is 13 or older. Part of this rite of passage means that I am honored with more responsibility within the Jewish religion and among the Jewish people. I can now wear a prayer shawl called a tallit. I can now say the blessings before and after the Torah. I can now be counted in a prayer group. I can now take on mitzvot. I should also be doing more ethical and moral deeds such as honoring my parents and the elderly, helping the weak and vulnerable, visiting the sick and doing acts to help the hungry and poor.

This is my Bar Mitzvah because it is the first time that I will have the opportunity to read aloud from the Torah. To do this, I had to learn to read Hebrew and even harder, learn to read without vowels and with the fancy Torah script. This took much time to study and practice. To me learning about my Jewish heritage is very important because it shows the other side of my religion that has not been so clear to me. Since I’m neither fully Jewish nor a full catholic, I declare myself a “cashew.”  No, I’m not the nut cashew but the cashew that means I have grasped both of my religions and wish to continue both of them in the future. This is very important to me.

My Torah portion is from the book of Deuteronomy. It is part of the Torah that is also read on Yom Kippur, the holiest day in the calendar, because this narrative is so powerful. It is about God saying to the people to never give up. Even if it is so far out of your reach you must never give up because one day you will reach it. Also, I will be reading a part of the book of Jonah, not me, the prophet. It is traditional on Shabbat morning to read from the Torah and from the Prophets. I picked Jonah for obvious reasons. He has a cool name! What I learned from the story of Jonah is to trust God no matter what the circumstances. For example, Jonah was sent to Nineveh by God, but chose to go somewhere else because Nineveh is so outrageously uncivilized. Jonah was then swallowed by a whale and then spit out after three days of prayer and regretting his decision to disobey God. He was spat out onto the land of Nineveh where he brought forth God’s warning to change or bare the wrath of annihilation. Jonah waited patiently for the annihilation of the people but it never came. The moral is that you should never lose trust in God and that God has forgiveness and caring.”

There is a debate in the Jewish world about whether families who want both religions in their lives can find a place within the organized community for learning and fellowship. I hope that by sharing this experience of a family who has sought out Jewish learning and living in real and meaningful ways, can help us think about how we might be able to open our gates a little more.

I wish you all a happy and healthy new year. May this be a year of getting to know the individuals who call us for information, or stop in for programming. It is through hearing each other’s stories and intentions, struggles, questions and yearnings that assumptions can be dropped and judgment held so that sharing can ensue.