How to Be a Kosher Vegan in an Interfaith Family 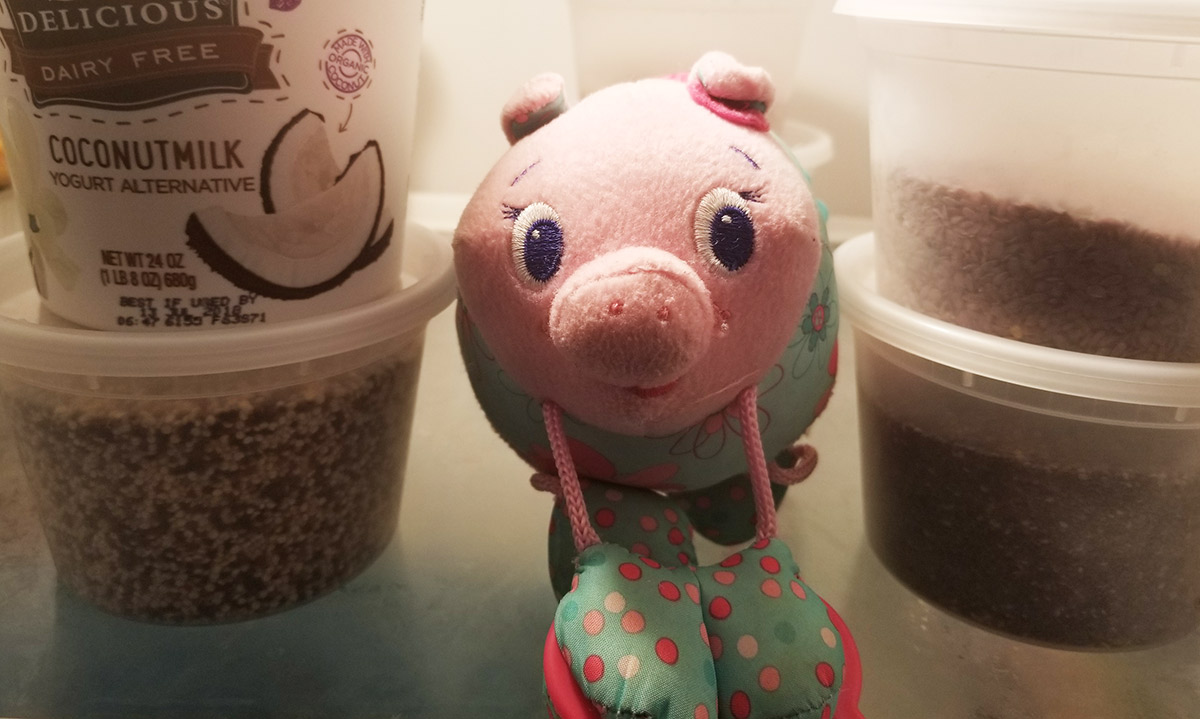 Almost two months ago I became a vegan. It’s a long story. I saw some crazy movies about meat and dairy, I started meditating on a serious basis and I also looked at myself in the mirror one morning and said, “Man I’m fat.” This might seem harsh. After all, I did have my second child only seven short months ago. But, the baby weight the second time around has been impossible to lose. It’s the kind of thing where I can feel my thighs getting out of bed in the morning. Also, once Helen, my 2 1/2-year-old, shouted “Mami has a big tummy” in the middle of Whole Foods as I was deciding between vanilla cream cookies or a tub of salted caramel ice cream. Awesome.

It’s already tricky having a kosher home. Once, Adrian spent the night at his brother’s house just so he could eat six chorizo tacos, a kind of spicy pork option that I don’t let him have in the apartment (pork is forbidden to Jews who keep kosher). But a vegan kosher home? Well, at least a kosher home with more vegan options was going to be tricky, especially on a tight budget.

At work I announce that my interfaith household is going vegan. “Even the kids!?” One co-worker gasps as if I had done something inexcusable. “Not the kids,” I say, “just me.” But all the same the woman walks out of the staff room and avoids me for the rest of the day.

On our first family trip to the grocery store I have a list of seeds, vegan protein and other items I need for this endeavor. Adrian walks with Helen to the meat counter. Alma stares up at the fluorescent lights from the baby carrier on my chest. As I grab a bag of chia seeds and head over to the fake cheese aisle, Adrian comes up behind me with Helen and asks me about a pork loin.

“No!” I yell breaking open a bag of sunflower seeds and shoving them into my mouth. I have forgotten to eat before we left the house and I am starving.

“OK, if anyone DIDN’T eat pork, it was Moses!” A woman standing behind us starts to laugh and I glare at her.

The pork conversation begins again in the car after we have shoved four bags of groceries in the trunk next to the stroller. Both girls are strapped into their car seats and my hunger has not subsided. In fact, I think the sunflower seeds made it worse.

“Well if Moses didn’t eat pork,” Adrian continues, “he definitely wasn’t a vegan. Also, we do have pork in our house!”

“Peppa Pig!” Adrian says laughing, “Peppa Pig is Helen’s favorite and she’s a pig!” Peppa Pig is a British cartoon about a little girl piglet named Peppa and her adventures with her family.

“Oh don’t start,” I say looking for a sunflower seed that fell into my bra. I find it and eat it. But the Peppa Pig theory stays with me.

Adrian and I do our best to be inclusive of both of our religions and traditions. Our most important focus are the values that each culture and faith has to offer. As an American, Jewish, Mexican, Catholic household we have statues and Jewish stars. We have Hebrew prayers and English ones. We teach Spanish, Hebrew and English to our girls. However, NO PORK ALLOWED. I wonder about two things. The first is, should I have toys that are pigs in my Jewish home? The second is, because I’m a vegan does this mean that now I am constantly going to be starving and eating things that fall into my bra?

Helen must have heard us talking in the car. It’s funny with toddlers–they really do hear everything. When we get home I begin putting the groceries away and Helen heads straight for her Peppa pig doll. She sets Peppa up at the table with a plastic “Happy Hanukkah” plate and a cup to match. Then she takes some of my sunflower seeds out of the container and starts to feed Peppa. “Poor Peppa,” I think, “a vegan piglet.” 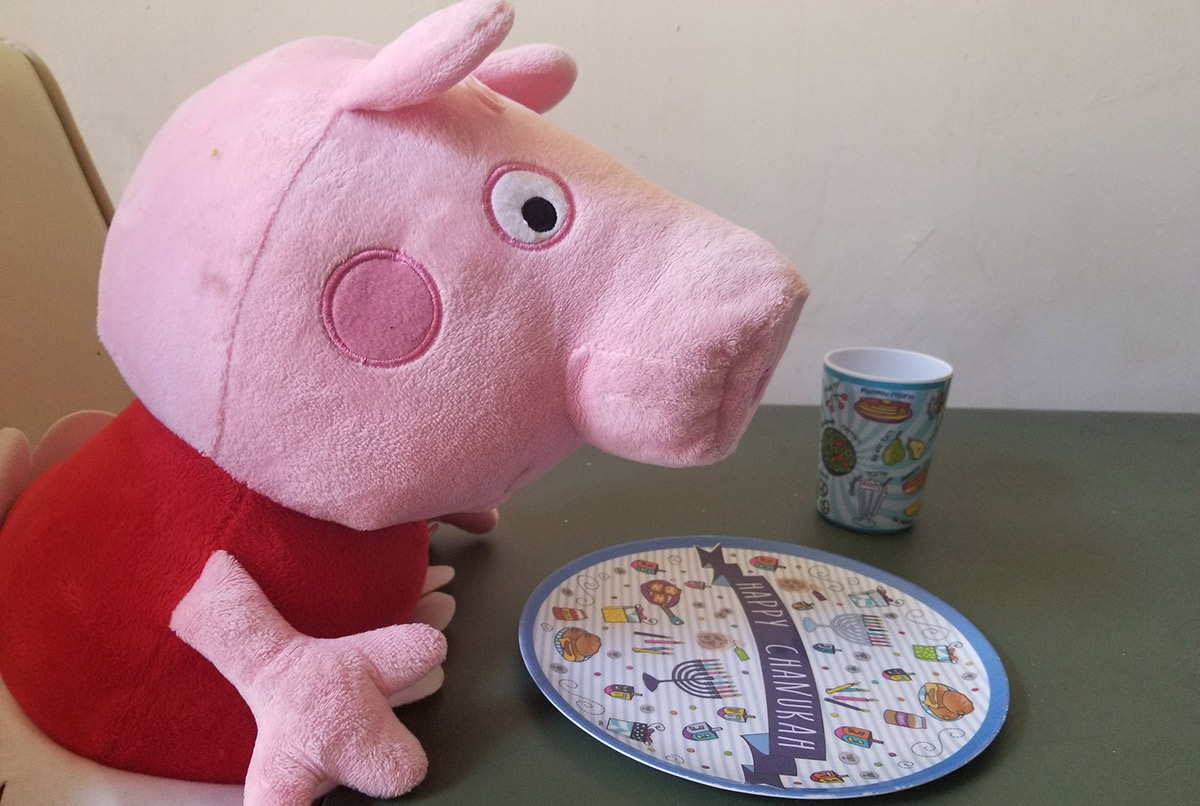 The next few shops get easier each time. We find vegan, soy-free sausages and Adrian thinks this is ridiculous. I make chickpea stews, curried lentils and huge spinach salads. In the morning I make coconut milk smoothies. The scale doesn’t budge, but my home is still kosher with vegan variety. I slip up only once when we all go to visit my mother. I excuse myself and say I need to use the restroom. I bring my phone into the bathroom with me and order a pizza. I try to get everyone to go into a different room but the delivery shows up too fast and I am caught.

We sit down to eat and upon opening the pizza box Adrian asks why one slice has no cheese on it. Everyone looks at each other. My mother stares at me: A film of orange grease has formed around my bottom lip.

“I think you have some cheese in your bra,” my mother laughs. I look down at my shirt. Sure enough a slab of melted mozzarella has slid down my chest and is heading toward the same crevice where I lost my sunflower seed. Adrian laughs so hard that tears fill up the corners of his eyes.