Getting Most of the Words Right 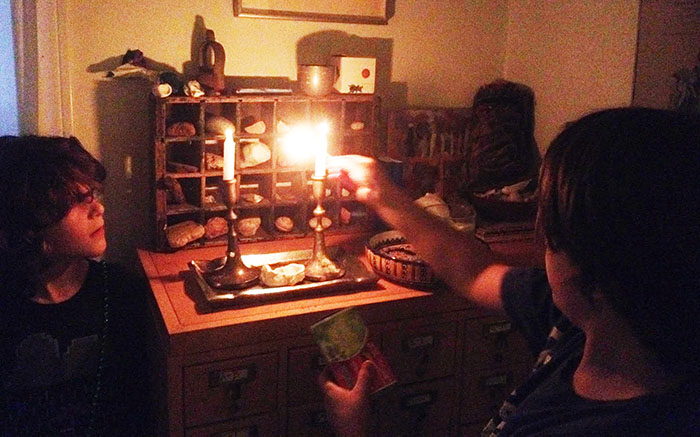 I have never suggested to my Catholic-born husband that he convert. As a child of intermarriage myself, whose parents always maintained their own distinct religions (but raised me Jewish), conversion wasn’t part of my heritage.

It was enough, I thought, that my husband supported me in raising Jewish kids. It was enough that he came to shul now and then. It was enough that he raced home from work in time for me to light the candles on Friday night, so that we could all be together for Shabbat. To be honest, I have inmarried friends whose partners are less supportive in this way. I felt lucky.

Then, last year, something happened I’d never expected. I was out of town, for work. I don’t remember where, but I know that I was busy on Friday night, and didn’t call home until Saturday afternoon, when my son picked up.

“Sorry, Mom,” he said right away. “But we couldn’t remember all the words last night.”

“What words?” I asked, confused.

“The words to the prayers,” he explained. “We tried. We did our best! We got most of them right.”

It took me a minute to realize was he was saying. There was a long pause before I asked. “Oh… did you guys light the candles… for Shabbat?”

“Huh, cool,” I said. I pretended like it was no big deal. We talked about other things, and after a minute we hung up.

But then I sat there, in my silent hotel room, and I felt my eyes fill with tears. Because while I’ve never asked my husband to convert, or even really thought about that possibility, I have wondered what would happen if I were hit by an eighteen wheeler. I’ve wondered whether Judaism is just the mom-show in our house. I’ve wondered whether it would continue in my absence.  Whether anyone besides me wanted it enough to make it happen.

This proof that they did want it stunned me.

Here’s the thing—I didn’t grow up lighting candles each week. That wasn’t my heritage any more than conversion was. Shabbat candles were something I decided to do as an adult, as a mother. They were something I added into my life by choice. They weren’t automatic.

One could blame that fact on my parents’ intermarriage, but one would be wrong in doing so, because in fact my very inmarried grandparents didn’t light Shabbat candles either. So for me, an intermarried child of intermarriage, to light candles each week had to be a choice.

Of course there is value in tradition, in heritage, in routine. There is value in doing something because we have been imprinted, conditioned to do the thing. But there is also value in making a choice, in consciously deciding.

After my parents divorced, my father became more observant than he’d ever been before. As an adult, I watched him change. He began to cover his head. He began to keep kosher. He chose to do so, and if I have a Jewish heritage, I think that’s what it is. Choice. Mindful observance. Constant reevaluation. My parents married without a religious blueprint, and so they had to puzzle out a household. They had to make decisions. Periodically, they had to revise those decisions. That process continues to this day. In their homes, and now in mine.

People often assume that as Jews continue to intermarry, observance will decline. But that’s an incredibly pessimistic view. That doesn’t take into account the joy of discovery, or the pure pleasure of Jewish practice. The human inclination to do better next time. Such pessimism assumes that observance must be linked to tradition and routine.

It doesn’t make room for families like mine, for my Catholic-born husband and my second-generation-intermarried kids, lighting the candles, saying the prayers, all on their own, for the very first time. And getting most of the words right, anyway.

Laurel Snyder is most recently the author of Baxter, the Pig Who Wanted to Be Kosher (a picture book) and Penny Dreadful (a middle grade novel). She lives in Atlanta and online at www.laurelsnyder.com.