I first saw the New York Daily News story reprinted on an Orthodox Jewish website, VosIzNeias. The news was, a New York state court determined that the non-Jewish widow of Jamie Herskowitz, Debra Eirand-Herskowitz, has permission to exhume and move her husband’s remains to the cemetery at the local church in Tuxedo, N.Y., after a three-year legal battle.

Apparently, when Mr. Herskowitz died, Eirand-Herskowitz gave permission to her mother-in-law for her husband to be buried at the family plot at the Mount Carmel Cemetery, not realizing she herself would not be able to be buried beside him because she is not Jewish. She later felt deceived and hurt by her in-laws because they did not inform her of the rules of traditional Jewish cemeteries.

Though Mr. Herskowitz, well-known in New York for his role as the concessionaire at Yankee Stadium, had discussed his burial plans informally with both his wife and his mother, he had not established his plans for burial in writing. According to the court proceedings, both parties–the widow and the mother–believed they knew Mr. Herskowitz’s wishes. In the end the court decided that the close marital relationship made it more likely that Eirand-Herskowitz knew what her husband had wanted.

Reading the court proceedings disturbed me. Much of the testimony was devoted to establishing the religious observance of Mr. Herskowitz. In order to show that he would not have minded being buried near a church, Eirand-Herskovitz discussed their observance of Christmas and Easter, mentioning that they had a Christmas tree in their home. Mr. Herskowitz’s mother, who lived in California and hadn’t had much contact with the couple over their 19 years of marriage, asserted that Jewishness was important to her son because when he went Carmel Cemetery with her to visit his father’s grave, he would take out a prayer book, put on a yarmulke, and say a prayer. It doesn’t seem to me that either having a Christmas tree or wearing a yarmulke and saying a prayer at a gravesite establish how important it was to an individual to be buried in a Jewish cemetery, or next to his spouse in a non-Jewish cemetery.

It’s a basic difficulty all interfaith couples face in death. If the Jewish partner wants to be buried next to his spouse, in most Jewish cemeteries he cannot. A few Jewish cemeteries have created sections where interfaith couples may be buried together, but most have not. To avoid this kind of sad family conflict at the worst possible time–when someone dies–talk with your family about what you want, and put it in writing.

How to Host a Virtual Shiva

Booklet: Mourning the Loss of a Jewish Loved One 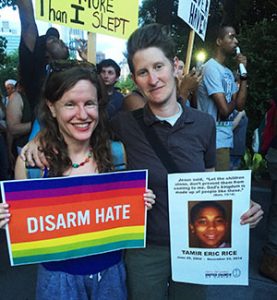 Why I am Not Hiding After Orlando 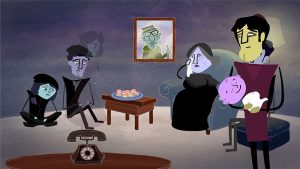