Celebrating a Holiday That’s Not My Own

It’s Valentine’s Day and I’m sitting in my car at 8 a.m. listening to a Jack Kornfield meditation talk called “Inner Strength and Kindness.” Did I mention that I’m also crying? Winter is never kind in New York and it’s been a rough month. I’ve been so busy and stressed lately that the only time I get to feel in touch with myself is in the front seat of my car. Last week, I sat in the front seat eating a box of donut holes and listening to Led Zeppelin. So, Jack Kornfield and a cup of coffee is an improvement.

I’m trying to decompress. I’m trying to get centered, which is what my religion and my culture often help me do. But, I’m crying on Valentine’s Day for no apparent reason. My Jewish family growing up didn’t celebrate Valentine’s Day, but my significant other Adrian and our 15-month-old daughter Helen celebrate it. Adrian is Mexican-Catholic and he loves anything with red roses. His Virgin of Guadalupe is known to appear to people surrounded by roses, so Valentine’s Day is a big deal for him. I still have the first rose he ever gave me. I dried it and now it lives between the pages of an Octavio Paz poetry book on our shelf.

I left Adrian and Helen cards and little stuffed animals with hearts all over them. I even left my mother a card and a stuffed Valentine’s Day Snoopy doll at her house, which is three blocks away from us. Maybe that’s the problem­—I can’t sit still. I’m so concerned with everyone having gifts for a holiday that I don’t celebrate and about Helen having the best of both Judaism and Catholicism, that I forget the world I come from. In the middle of trying to fit two religions into every crevice of our lives, I forget my own spirituality. I forget the main reason those two religions and those two cultures exist in our lives. 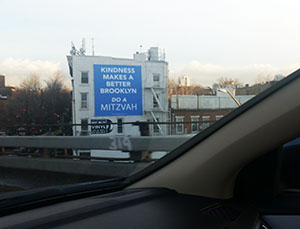 In the front seat of my car as I meditate and cry, my yogic “monkey-mind” shows me a few things. First, I remember a conversation I had about a piece of literature in which a “many colored coat” is mentioned. Of course, this was a piece of writing about the story of Joseph. Joseph in the Old Testament has two dreams. In both dreams, Joseph’s brothers bow down to him. When Joseph tells his brothers about these dreams, they grow angry. They end up selling Joseph to some merchants and then they dip his coat in goat’s blood to make their father believe that wild animals killed him.

My thoughts are interrupted by Jack Kornfield’s calm voice asking me to breathe. I go back to my breath, but I can’t stop picturing Joseph and how upset he probably was that his brothers sold him for 20 bucks and some cigarettes. What I think about, though, is the fact that I can remember this story. I was probably no older than 5 or 6 years old when I heard it. I also remember that Joseph becomes a powerful leader and meets his brothers again in Egypt, but they do not recognize him. They bow down to him just as he had predicted in his dream. Joseph ends up playing tricks on his brothers to test their wicked ways, but he ends up forgiving them. After all, the story of Joseph is a story of forgiveness. In the moment that Joseph forgives his brothers, he also forgives himself.

My thoughts turn to a Catholic altar in the Mexico City Cathedral called “The Altar of Forgiveness.” The story goes that a famous painter was accused of a crime and while he was in jail, he painted the most breathtaking picture of the Virgin Mary. It was so beautiful that God forgave him and the altar was built. I think of the old Jewish tale of Joseph and his forgiveness. Then, I go back to the meditation talk and Jack Kornfield quotes Nisargadatta Maharaj when he says, “Wisdom says I am nothing; love says I am everything. Between the two, my life flows.” I cry some more. I breathe some more. I turn off Jack Kornfield. I turn on Led Zeppelin and I drive.