A Jewish Wedding for a Catholic Girl

I was raised Catholic. I have received sacraments in the Catholic Church including Baptism, Penance, Holy Communion and Confirmation. While spirituality has always been an important part of my life, it has been a part of me that I have kept more reserved. As I grew through adolescence and into adulthood, the thought of marrying someone of a different religious background never crossed my mind. But after meeting Jarrett and growing closer, our different faiths became a norm in our relationship. We continue to teach each other about our different religious backgrounds and continue to respect each other for these differences… and that is how our relationship works.

Jarrett has been my wedding date to 10 weddings in the last two years. We have watched some of our closest friends and family members marry their significant others in Catholic, Jewish, Christian and non-denominational ceremonies. As each wedding came and went, I found myself thinking about what kind of wedding ceremony I might someday have. It wasn’t until Jarrett and I got engaged in March of 2015 that I realized my thoughts would soon become actions as we prepared to plan our interfaith wedding. 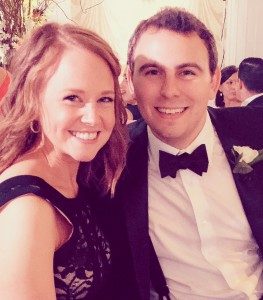 When Jarrett and I sat down to begin wedding planning, he expressed to me how important it was to him to be married by a rabbi in a Jewish wedding ceremony. At this point in time, I had been to two Jewish weddings but felt they were truly unique and memorable. I liked that the Jewish ceremonies were personal and intimate with a strong focus on the bride and groom. While I have always felt that Catholic wedding ceremonies are beautiful and meaningful, I had never dreamed of getting married in a Catholic church and this was not a requirement I needed in order to marry my best friend. What mattered to me was what Jarrett felt to be important for our big day. It was special to hear him explain that his Jewish heritage was very important to him and that having a Jewish wedding was something he had always wanted. So it was settled. We would be married by a rabbi in an interfaith wedding ceremony with an emphasis on Jewish traditions. The only problems were, I did not know a lot about Jewish wedding traditions and had no idea where we would find an interfaith rabbi to marry us.

As fate would have it, while working in Philadelphia one day, I had a meeting with a pharmaceutical representative. At the end of the meeting, I asked her if she had plans for the upcoming holiday weekend (Easter). When she responded that she was Jewish and celebrates Passover, I found myself feeling somewhat embarrassed that I hadn’t considered this before asking the question. I apologized then explained that my fiancé is also Jewish and that I celebrate Passover with him and his family. She asked about wedding planning and I explained that we had plans to look for a rabbi to marry us. She excitedly responded that she has a very close friend who just so happens to be a rabbi and the director of InterfaithFamily/Philadelphia. She gave me her friend’s contact information and I reached out to introduce myself. Jarrett and I met with Rabbi Robyn Frisch and knew our search for the right wedding officiant was over before it had really even begun. Rabbi Frisch was kind, easy-going and non-judgmental. We look forward to working with her over the next several months and having her as an essential part of our big day!

During our second meeting with Rabbi Frisch, she provided us with some information to guide our decision-making through the ceremony-planning process. I was relieved to have someone to teach us more about Jewish wedding traditions so I could expand my knowledge and understanding throughout the planning process. Over the next several months, Jarrett and I will be busy making important decisions including designing our chuppah, choosing a ketubah and determining which Jewish wedding traditions to incorporate into our ceremony. As we continue to move closer to our wedding date, we are also looking forward to the opportunity to participate in InterfaithFamily’s “Love and Religion” Workshop which will give Jarrett and I the opportunity to dive deeper into some challenging scenarios that may arise in our future as an interfaith couple. I feel this will help strengthen our bond and allow us to learn even more about each other as we approach marriage. I look forward to sharing our wedding planning experiences as we move closer to saying “I do” in eight short months!