Why I Waited for Interfaith Love 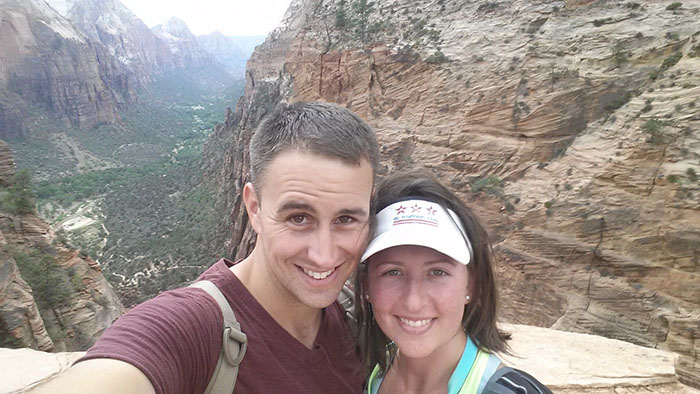 It took me 20 years to find the love of my life. If you told me 10 years ago, or even 15 years ago that I’d end up with a man raised Presbyterian, on a farm, who is also a war veteran, I would have laughed at you. But if you asked me a full 20 years ago, it would have made perfect sense.

Growing up in an interfaith family with a Jewish mother and a Catholic father, I was drawn to my Judaism the way some kids are drawn to forbidden things. I was intrigued by it, wanted more of it and didn’t really know how to access it but for tiny, little tastes on holidays or special occasions. I knew that when I grew up, I was going to practice Judaism, have a Jewish home, Jewish friends—a Jewish life. But I didn’t quite know what that meant. It was more of an idea than a path at that point. A mission without a strategic plan.

Growing up in a town with very few Jews contributed to the fact that my own limited practice of Judaism was essentially expository. Everything I did, I also explained to those around me. This was a habit that naturally fed into my work as a Jewish educator in the first several years of my career, and not coincidentally, my interfaith relationships.

At age 14, almost exactly 20 years before I would meet my future husband, I went on my first date, with the son of a Methodist minister. That relationship lasted nine days. Then there was the Irish Catholic boy for a whole six months. Then the Presbyterian boy I worked with on the student newspaper for an entire season. And the final high school relationship, the one that stretched into college, with the Methodist basketball star. It never occurred to me then that I might date a Jewish boy in order to lead a Jewish life, but this was primarily because there were only a couple in my class and as a Jewish child of an interfaith marriage it didn’t yet occur to me that this made a difference.

As I’ve reflected on this as an adult, it has become clear to me that these formative years had an impact on who I would ultimately seek out, find attractive and most important, love deeply. College was the first time I actively pursued Jewish dating, despite the fact that I attended the Jesuit Catholic Boston College. While only around one percent of the student population at BC is Jewish, the Jewish student population in Boston is plentiful and I was a strong networker. Still lacking a strategic plan, I was ever mission-oriented and dated several “nice Jewish boys” during my college years. Still, the most formative relationship I had in college was with my Episcopalian on-again-off-again boyfriend.

The post-college years were my most strategic ones. I started working at Hillel, I signed up for JDate. I insisted on dating only Jews. In those 10 years or so, I met one man I felt a strong connection with. It turned out he felt a strong connection with someone else. It was frustrating, challenging, it made me feel sad and sometimes hopeless. I decided to stop trying so hard. I opened my heart, still with some hesitations, still believing I was meant to be with a Jewish man, but trying to simply let the universe do its work.

While still looking for a Jewish man, I dated men who weren’t Jewish casually: I fell head-over-heels for a man who turned out to be a liar and a cheater, I fell for a man who could never love me the way I deserved to be loved… and then I met my future husband. I didn’t know it at the time. I was trying to get over the last guy and just needed a distraction. “He’s not Jewish,” whispered my subconscious. We met at my cousin’s wedding in the fall. We went on our first date a month later. It was long distance, but he cleverly came up with reasons to pass through town every month. Then we started planning visits. After six months I realized I was an idiot if I let him get away.

I’m marrying a man who is kind, smart, generous, loving, more obsessed with Democratic politics and values than I am and also happens to have been raised Presbyterian. Last night I was relaying to him a metaphor I had used at my government job involving the Book of Esther. “Wait,” he said, as I finished the story, “but who would be Haman in this scenario?” It actually took me some time to come up with an answer to that question, as I realized I had been outwitted in my latest Jewish educational moment by my partner who isn’t Jewish.

We’ve already had the big conversations: We’ll raise our kids Jewish, we’ll keep a kosher home, we’ll participate in Jewish community. We’ll also honor the traditions we had growing up, when we visit our parents’ homes. And we’ll go out into this world with the hope that our communities embrace our choices.

I know it won’t be easy. I can already tell in my own Jewish community that some are uncomfortable with the way that love found me. My closest friends are thrilled and they see what a good partner he is to me. But I cannot even count how many times I have been asked by Jewish friends if he is also Jewish, and when I say no, they quickly express support anyway, pretending it doesn’t matter to them. It hurts my heart when this happens. These are habits, not intentional barbs, but they affect how interfaith couples feel in community. And as the child of an interfaith family, I know this well. What’s even worse, there was a time when I acted this way toward other interfaith couples. Please consider this my apology.

I am lucky, because 20 years after I first started looking, the love of my life found me. If I hadn’t been willing to open my heart to what my Judaism could look like with a loving, supportive partner who isn’t Jewish, I might have missed out on it all.

I made a decision early in my life to pursue Judaism and despite the fact that biology, geography and many other factors were pulling me in different directions, I am still pursuing it. One of my favorite sayings about compassion is, “Be kind, for everyone you meet is fighting a battle you know nothing about.” It’s something I am hoping our Jewish community will come to embrace as we learn to do a better job of welcoming our interfaith families. You may be born a Jew, but to be Jewish is not a passive thing. Pursuing Judaism is a choice you make every day of your life, a choice that is harder for some than for others, and as a community and as individuals we should all be supportive of this.

Brianne Kruger Nadeau is a legislator in Washington, DC. Prior to her time as an elected leader she was vice president of Rabinowitz Communications (now Bluelight Strategies), she worked on Capitol Hill, at Hillel: The Foundation for Jewish Campus Life and as a youth advisor at B’nai Israel Congregation in Rockville, Maryland. She belongs to D.C. Minyan, an egalitarian prayer community.