Why a Raisin Has Never Tasted So Good 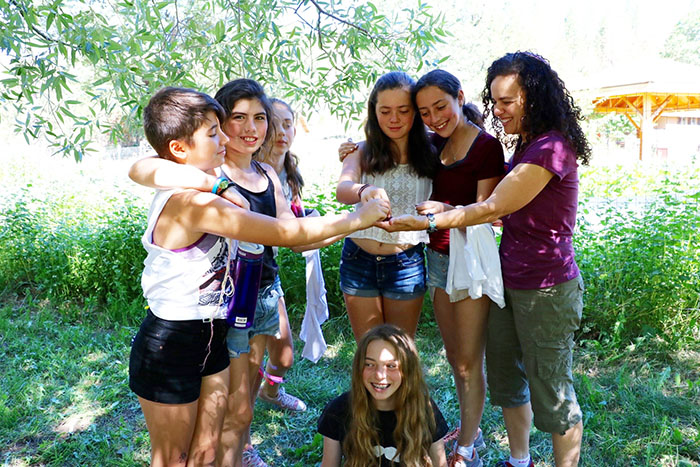 I always spend some time as Rabbi in Residence at Camp Tawonga in California each summer, and it is always a highlight of my year. Camp’s Jewish theme changes each time, and this year we are focusing on the word from Torah “Hineni,” which means “I am present.” Many biblical heroes, notably Moses at the burning bush, respond to a challenge or opportunity by proclaiming, “Hineni!” or “I am here and I am spiritually ready.” This week, we offered campers a way to cultivate a state of Hineni through a mindful eating practice.

The hardest part for most campers was when they were handed a raisin and instructed to refrain from eating it until the end of the exercise to get the most out of the experience. We placed a raisin in the palm of their hands and asked them to contemplate every aspect of the morsel. What does it feel like? Smell like? What were the physical forces in the universe that made it possible for this bit of sustenance to arrive into our hands? Who were the people who contributed to its creation?

Campers talked about the laborers in the grapevines, the wind, sun and rain, the workers at Sysco’s plant who packaged the raisins and the truck drivers who brought them to camp. They were especially cognizant of the water necessary to sustain the vines amidst California’s water crisis. What a miracle to be holding this piece of food that was the result of so many complicated forces!

Finally, we thought about whether the food about to be consumed came from a tree or the ground so we could say a Jewish blessing before eating it. Pausing to think about where our food comes from and choosing either traditional Jewish words or creating our own prayers can turn every eating experience into a moment of Hineni. Prayer can be a ritual reminder in a fast-paced world to stop for a moment, bringing to mind all of the varied forces that went into the production of that bite of food.

When asked about the experience, campers had many responses:

“A raisin has never tasted so good!”

“It really made me appreciate the raisin a lot more, because we stopped and thought about where it came from.”

“I never thought about what it takes to get a simple raisin to a box.”

Others remarked on the fruit bursting with more sweetness than they usually notice. And in a few rare cases, kids who previously hated raisins reported liking them for the first time. Some remarked that they felt Hineni in their bodies after trying out this practice. The campers thought about other moments that seem to pass by unnoticed in their daily lives that they could mark as notable and sacred.

Some people are naturally inclined toward Hineni. Most of us struggle to slow life down and be present for the moments large and small that make up our complicated lives. Watching the campers experience this exercise reminded me that being present or some might even say “spiritual,” is not necessarily an inborn character trait with which we are either gifted or denied. Most people need to cultivate those skills, but they are completely learnable and need to be reinforced throughout our lives.

This sense of connectedness to ourselves and the world around us is available whether or not we grew up within a religious tradition or with more than one religious background. Many interfaith families struggle with how they are going to manage “religion” in their homes. But a first step might be to identify spiritual abilities or skills we want our kids to possess to deepen their experience of being alive: being present, expressing gratitude, feeling connected to other human beings and our environment.

Here at camp, kids are learning that Jewish prayer is one tool for cultivating that mindset which we have at our fingertips. In past years, my own kids have returned from camp wanting to sing the Ha’Motzi prayer of thanks for bread at our home table. I believe this was in part because there was such a boisterous energy in the dining hall when hundreds of kids sang the words together. But perhaps they also unwittingly wanted to bring it home because the rote repetition of this prayer three times a day provided an automatic moment of reflection and pause, lending an aura of the sacred to a monotonous, daily occurrence. This is just one of the ways campers at Jewish overnight camps learn the tools to be more present in their lives and more attuned to who they are who they are becoming.

To learn more about the array of interfaith-friendly Jewish overnight camps in the Bay Area, including URJ Reform Camp Newman, Camp Tawonga, Maccabi Sports Camp, and the brand new Conservative Camp Ramah Norcal, get in touch with me at mychalc@18doors-mly-1029-staging.mystagingwebsite.com or check out the list here!