The 18Doors Chicago Innovation Hub helped facilitate a class for grandparents about passing on their values to their grandchildren. The conversation can be especially nuanced and sensitive for those grandparents who have grandchildren being raised in interfaith homes in which the parents struggle with “what to do about religion and traditions.”

Grandparents often say that they want their grandchildren to be kind, happy, giving, empathetic people. We then discuss whether these traits are “Jewish.” Does Judaism have a monopoly on kindness? Certainly not. But, Judaism does have our own vocabulary, narratives and texts which teach us about this value. Does it “matter” if our grandchildren or children know the word “chesed” (kindness) for instance, or the phrase “gimilut chasadim” (acts of loving kindness)? Does it make a difference if they learn about references in the Talmud to acts of kindness being even greater than giving tzedakah (money to make things “right”—literally righteousness) because one can perform kindness to the living or the dead (through the honor of burial) as well as other reasons? I actually do think it adds a layer of richness, connectedness, roots, identity and pride to connect universal values with our distinct and special cultural references to it. 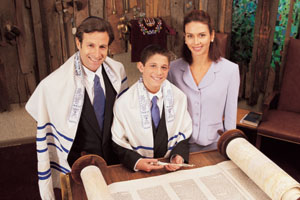 So what is distinct about Judaism? Rabbis are often worried about sustaining the unique, set-aside, separate and “special” ways of Judaism. This is what leads to continuity. Is it through being insular, ethnic and concerned with ritual barriers and religious barriers that keeps the Jewish civilization alive and thriving? What would happen if someone not Jewish participated in rituals intended for Jews? Could we lose the idea that there is a distinctiveness of our people and tradition? It is one thing to have an open, loving, accepting community, but when it comes to ritual participation should there be boundaries (as in boundaries of who can take communion, for instance, in Catholicism)?

When it comes to non-Orthodox Judaism—where we look to Jewish law and traditions as guidelines—to perhaps inspire or suggest a way of behavior, but where Jewish law can be molded, updated and changed, then our distinctiveness is not based on rituals and laws, but something else.

What makes progressive Judaism distinct is our approach to Judaism. We approach Judaism with a modern, feminist, historical, rational, spiritual and activist lens (among others).  What makes this Jewish expression distinct is our ability to allow people who did not grow up with Judaism experience the culture fully (precisely because we are not wholly concerned with the letter of the law).

We are distinct from Christianity and other religions. We are distinct from other forms of Jewish expression. There are both religious and secular humanistic ways to live this form of Judaism. Is this just Judaism-light or watered down Judaism? What’s authentic about this kind of Judaism? Different people will answer this question differently. Nobody should be made to defend his or her identity and religious or cultural ties. Does an open, non-legalistic Judaism perpetuate Judaism? If grandchildren don’t know the phrase “gimilut chasadim” but only that being kind is of utter importance to the matriarchs and patriarchs of their family, will Judaism continue? I do not believe that the only way for Judaism to survive is if it is a Judaism concerned with legal boundaries.

Maybe when we stop stressing about what a parent who isn’t Jewish can say during a child’s bar or bat mitzvah or whether there is an alternative candle lighting blessing for someone not Jewish, we will see that in liberal Judaism our liturgy is metaphor and that the people in the pews may not be concerned only with Jewish law and that many ignore the law when it seems sexist, archaic, irrelevant or un-inspiring.

Sometimes a lack of literacy is to blame for not understanding a tradition and simply writing it off without ever studying it or trying it. However, maybe we can “let it go” when it comes to ritual and legalistic distinctions and feel confident that it is not these boundaries that make progressive Judaism viable and special. It is our approach to Judaism which should be celebrated and highlighted.