We're Interfaith: Now What Do I Tell My Sons about Dating? 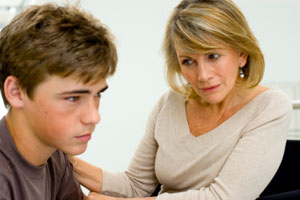 When I married my spouse who is not Jewish, I wanted nothing more to do with being Jewish. That was 21 years ago, and while I was sad that my parents, who were becoming more observant (and eventually Ultra-Orthodox), didn’t attend my wedding, I saw little sense in what Judaism had come to mean to me. Honoring my parents seemed far less important than marrying someone I loved, a wonderful man who I had met at a writer’s workshop.

But things changed when our first son arrived. When I was pregnant, we easily decided he would not have a bris. But by the delivery date, I had arrived at a different conclusion: He couldn’t not have a bris. Fast-forward 16 years, and our two sons are growing out of their childhoods, as I was 40 years ago. I have long since reconciled with my parents. We belong to a vibrant Conservative congregation in the Twin Cities, where they and I go regularly to Shabbat services. The boys attend Jewish camps and participate in our congregation’s youth groups.

Now, what do I tell my sons about marrying someone not Jewish?

Growing up in Flint, Michigan, when General Motors was booming, I was part of an affluent community. We lived in an architect-designed house, had five tickets to High Holiday services and bought seasonal wardrobes from Saks Fifth Avenue in Detroit. My sisters and I went to Hebrew School three times a week. But it was getting harder to actually enjoy being Jewish. Many of the other kids stopped going to Hebrew School. Fewer families went to shul (synagogue). Saturday afternoons, my friends and I made trips to the mall, first “just to look around,” and then eventually, to shop for 45s and Clinique blush. Families spent fall Saturdays in Ann Arbor, cheering on the Michigan Wolverines.

At home, the rules that came with being almost-Orthodox were making me claustrophobic. As a 1970s teenager, I felt the very idea of dating a boy who wasn’t Jewish, who typically swam and played tennis or golf all summer instead of going to camp, would allow me to explore a world that seemed much less rule-bound.

My rebellion was immature in some ways. I had a very strict father, and I was afraid to tell my parents that I actually had a boyfriend who wasn’t Jewish. At the time, though, I didn’t realize how much I had internalized the Jewish ways that had always seemed imposed upon me. I adored my Bubbies and Zaydies. The cycle of Jewish holidays, each one with its own set of customs and foods, brought with it a sense of family pride. My identity had been formed around “being different,” and I had actually come to like it.

Ironically, marrying my husband who was Catholic helped me reconnect with Judaism. Raised in Rye Brook, New York, where weekly church-going subsided as he grew into his teens, he lived in a neighborhood full of Jews. Many of his close friends and teachers were Jewish, and I think our shared connection to my cultural background created a positive foundation for our relationship.

When my husband and I moved back to the town I grew up in, a much-diminished version of a community that once supported two robust Jewish congregations and hundreds of school-age Jewish children, he was able to understand how difficult life was for me spiritually. Our first-grade son was one of a remaining handful of Jewish kids in the city’s school district. Most of the downtown businesses were boarded up. Even the Flint Public Library, whose children’s room had been sacred to me, was in danger of closing.

As a teacher, I taught Holocaust novels to students who had never met a Jew. Some of my students even thought “Jewish” meant “Amish.” A few snickered at the piles of skeletons in photographs on the U.S. Holocaust Museum website. At night, I mourned the fact that the bustling Jewish life I grew up with no longer existed (I was starting to wonder if maybe I’d imagined it). I had never before felt so invisible.

During those difficult times, I felt the pain of not belonging anywhere—my past, my present, the Jewish or secular world. In Flint, I once had a community to react against. Now that life no longer existed.

In a desert, occasional flowers glow against a sandy expanse of nothingness. In Flint, the desert of my early parenting years was composed of empty storefronts, and neighborhoods pocked by vacated school buildings with no money to tear them down. Near a trailer park, the Jewish cemetery, neatly dotted with garden flowers, held many people who once filled the rows at the synagogue. Still, for me, something essential blossomed during my adult life in Flint: a sense of Jewishness in the family I had created.

The sudden reversal of my decision not to have a bris for our son led to: “What do we do next?” The question has repeated itself many times, sometimes answering itself easily, sometimes shaking me to my core. I am still in awe of the power of that question, but finally, I am not afraid of it anymore.

Like many parents, I will not be able to tell my children exactly how to be Jewish and raise Jewish children. Once, when I asked my older son if it would be better to marry someone Jewish, he answered, “It sure would be easier.”

I hope we have made our sons strong enough to let the inevitable questions arise. If the place where they live has a large Jewish population, the problem might be solved with a tuition check or carpool arrangement. Or maybe the question will keep them up at night, tossing and turning with their own childhood memories of a beautifully set Shabbat table, the peace and comfort of the family gathered around it, hearing stories of great-grandparents who changed their lives so their children could be freely Jewish. And maybe some of the questions will take time to answer. Then, it will require not just the strength to be challenged by the question, but the strength to let the question hover, to remain unanswered, to be worked out in an unpredictable way, in the right time. Or not.

When my sons inevitably ask me whether it’s important to marry someone Jewish, given the fact that I chose not to, here is what I hope to say:

A significant part of your heritage is Jewish. A significant part of your heritage is Irish and English and German. Judaism helped some of your ancestors enrich their lives, but marrying someone Jewish, or not Jewish, is no guarantee of happiness. Ironically, connecting with the person you are, and those who came before you, could very well make you feel stable in a world that struggles with difference—it did for me. In short, be who you are, nothing more, nothing less.

May it be enough to guide them.

How to Talk to Your Kids About Not Celebrating Christmas