Liliana and I met four years ago as student coordinators for the first-year orientation program at Brandeis University. We could not have been more culturally different. I was raised in a religiously Conservative Jewish household and keep kosher. At the time, I was also an active member of the Jewish student organization, Hillel, and participated in Shabbat (Sabbath) and holiday services regularly. Lili, a Native Hawaiian Islander, was very spiritual but not associated with any organized religion. Neither of us expected to meet the person with whom we would share the rest of our lives, but as luck has it, the two of us met, fell in love, became engaged and this past summer married.

I could lie and say that this entire progression from love to marriage was simple and uncomplicated, our families were completely accepting of our intercultural relationship and marriage, and planning the wedding ceremony was a metaphorical piece of cake–but who would believe that? Truthfully, as with nearly all weddings, we encountered a few unique hurdles along the way, but in the end, we could not be happier with how we managed to overcome them all. 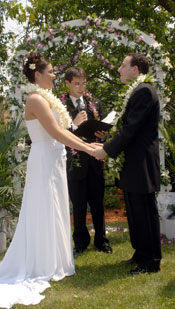 Immediately after we were engaged, Lili and I were confronted with the most difficult aspect of planning our wedding–creating a ceremony that our families would accept. Lili’s family was excited and genuinely interested in the Jewish heritage and religion that I would be bringing into the family. They were accepting of any customs we wished to include in the ceremony and were eager to participate as well. However, my parents struggled religiously with the idea of their son marrying a shiksa (non-Jewish woman). It conflicted so egregiously with their beliefs that upon telling them we were engaged, my parents affirmed what they had previously stated, “We’re not attending the wedding if there will be a Jewish ceremony.” To them, any wedding ceremony between a Jew and a non-Jew that included Jewish wedding customs would be sacrilegious.

Lili was extremely upset and angry with my parents and their reaction. She was hurt by what she perceived as a rejection of our relationship and did not understand their feelings behind the decision. Conversely, I was not angry at all. I was both disappointed and understanding. At what I considered to be the most special moment of my life, I was unwilling to give up my Judaism. My personal spiritual and religious beliefs were more important to me than my parents’ attendance at our wedding. But because I felt this way, I understood that my parents’ personal beliefs were just as strong–they were simply different. It pained them to say they could not attend as much as it did for me to hear it.

Following many emotional conversations between Lili, me, and my parents, we were able to develop a solution that would include my family. We decided to have two ceremonies the week of our wedding. The first ceremony, which took place on a Wednesday, included all the Jewish wedding customs associated with a wedding, from the signing of a ketubah (Jewish marriage contract) to the stomping of the wine glass at the end of the ceremony. We only invited our wedding party, parents, grandparents, and a select few others and held the ceremony in our house. We had members of our wedding party, both Jewish and non-Jewish, participate by reading the blessings and holding the chuppah (ceremonial Jewish wedding awning) above us. To add to the warmth of the ceremony, a close friend of ours from Brandeis conducted the service. He was not a rabbi nor a cleric of any denomination, but a temporary justice of the peace licensed by the state of Massachusetts. Also, by having a close friend perform the service, we avoided the difficulty of finding a rabbi who would be willing to conduct our interfaith marriage. My parents, of course, chose not to attend this ceremony.

The larger, more elaborate Sunday ceremony was completely secular so that my parents would feel comfortable enough to attend. All of our guests were invited to the Sunday ceremony which was decorated with tropical plants and flowers that were shipped in from Hawaii to incorporate Lili’s cultural heritage. There were no specific Hawaiian traditions that Lili wished to include in the service, so we designed the ceremony from scratch. Once again, our friend beautifully conducted the service, we exchanged vows, a member of the bridal party read a poem, we re-exchanged rings and then kissed. We were married again.

Some people are never married. Others marry many times. Rarely do people get married twice in the same week to the same person. As inconvenient as we thought it might be, it actually made the week of our wedding so much more special. In addition to including my parents and my religion, separately, in the most precious moments of my life, Lili and I were presented the opportunity to enjoy being married twice.

Hal Schneider graduated from Brandeis University in 2002 and is now working as a lab supervisor in the Department of Medicine at Children’s Hospital in Boston. He lives with his wife of one year in Medford, Mass.