Uniting of the Tribes: Our Hindu-Jewish Wedding

Religion was the topic of the first conversation we ever had. At a James Bond-themed party, talking late into the night, Alaka learned of Jason’s journey from Judaism to Buddhism and back again. Jason learned of Alaka’s love for the Bhagavad Gita, and the common ground we shared in the teachings of Ramakrishna and Swami Vivekananda, who emphasized the harmony of all religions. At one point, enthralled by the dialogue and carried away by the moment, Jason said, “wouldn’t it be crazy if we just got married tomorrow?” Alaka laughed (somewhat dismissively); little did she know the two of us would be enjoying both a Hindu wedding and a Jewish wedding three years later.

In the early stages, we did encounter some concerns from our parents, who were worried about the strains of a marriage with so many places to call home (Boston, Northern Italy, West Bengal, and Colorado). Working through their fears took time, patience, and some careful education of each other and our parents about the two cultures, as well as serious reflection on how we would build our life together. When faced with especially difficult challenges, we had a mantra to fall back on: “We love God, and our relationship brings us closer to God, so the universe will give us a helping hand.” 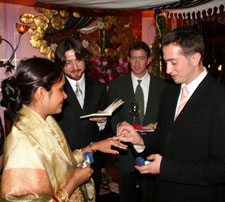 And so it did. When we visited Alaka’s parents in December of 2004, Jason asked Alaka’s father for permission to marry her. Permission was happily granted, an engagement ring presented, and almost immediately the planning began. The wedding would take place in Kolkata one year later, and would follow the Bengali Hindu tradition, with all the ceremony, gifts, flowers, and family that would entail. It would be followed by a Jewish ceremony in Boston, attended by Alaka’s parents and the members of Jason’s family who could not make the long journey to India.

The first, and most important, theme in making our Hindu, Jewish, and Christian family comfortable through the process was encouraging participation. Jason’s family arrived in Kolkata several days before the wedding, giving them time to explore the city, shop for Indian clothes, and connect to the new environment on their own terms. Jason’s parents held a dinner for all the international guests at their hotel, allowing them to feel a sense of hosting and home. The festivities began the following day with a series of pre-wedding rituals and celebrations, each of which gave the American and Italian family and friends a chance to dive into what would otherwise have been a foreign affair. They blessed us and presented gifts in the ashirvaad ceremony, hand-fed us in the aiburo bhat (rice feeding ceremony), were decorated in henna at a mehendi party, and sang and danced at an open mic musical celebration called a sangeet. The next day held even more pre-wedding ceremonies, the biggest hit of which was the gaye holud, a turmeric ceremony-turned-food fight, in which all of our guests ended up smeared head to toe with yellow turmeric paste. We laughed and cried as we watched our two families intertwine, seeing any awkwardness dissolve with each meal they shared and each handful of turmeric paste they rubbed on each other’s faces. By the time the wedding ceremony itself rolled around in the evening, the two families were already becoming one, miraculously crossing barriers of culture, religion, and even language. 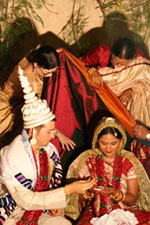 Two days later, Jason’s father spontaneously offered to host the wedding reception that Alaka’s father had organized in his hometown of Durgapur. This unexpected gesture, which followed Bengali tradition, brought tears to Alaka’s parents’ eyes. It proved that Jason’s family were no longer guests, but part of Alaka’s family–our philosophy of participation had truly succeeded.

The second theme was to include Jewish elements throughout the Bengali celebrations. During the rituals on the wedding day, Jason wore his tallit (prayer shawl) over his Bengali clothes. This gave him a chance to talk about his own religion and practice with Alaka’s family and let the Western guests know that both traditions were being honored. During the dance party after the ceremony, we played a CD of Jewish favorites; the Bengalis laughed hysterically as Jason, his father, and four Jewish friends sang a heartful rendition of “Siman Tov u Mazel Tov” (a joyous song of congratulations), and then participated gleefully as we were hoisted up onto two chairs for “Hava Nagila.”

The third theme was to simply recognize and emphasize how many commonalities there are between the Hindu and Jewish rituals. In the Bengali pre-wedding rituals, the bride and groom each crush a clay cup under their heels, foreshadowing the wine glass we would break a month later. When Alaka joined Jason for the exchange of garlands, she circled him seven times, exactly as she would in the Jewish ceremony. When we exchanged garlands, it was under the shelter of Jason’s prayer shawl, and we were married under a temporary, vine-adorned structure called a mandap–both spaces were reminiscent of a Jewish chuppah. Finally, the culmination of the Hindu ceremony had the two of us walking seven times around a sacrificial flame, again mirroring Jewish custom. These commonalities left everyone with a sense that both of our traditions had grown from the deepest soil of history.

By the time we came back to Boston for the Jewish ceremony, Alaka’s parents already felt like part of the family. The Jewish ceremony, held at Upstairs on the Square in Cambridge, allowed them to meet more of Jason’s uncles, aunts, and cousins. It gave Jason’s family a chance to see us read our ketubah (Jewish wedding contract), be blessed by our rabbi, and exchange wedding rings. We also gave them the opportunity to enjoy the highlights of our Indian wedding through a DVD that Jason had composed.

Now that we are settling into life in Boston, we thank God every day for our families’ openness and understanding. Our emphasis, as we grow our own family, will always be to celebrate both cultures and honor the spirituality of both our ancient religions. We feel privileged to have such rich traditions to draw upon for the rest of our lives together.

Jason Jay was born in Boulder, Colo., and is now a doctoral student at the MIT Sloan School of Management. Alaka Ray grew up traveling back and forth between Kolkata, India and the United States, and is now a medical student at Harvard. They live in Boston’s South End.