Every year, a new crop of Haggadot (plural of Haggadah, the text read at Passover seders) goes to press. In recent years, many have been written with expanded English translations, employing comparisons between the Exodus story and contemporary events, using feminist and other inclusive language, and having a general goal of making the story more accessible to a broader swatch of the community. This year is no exception. 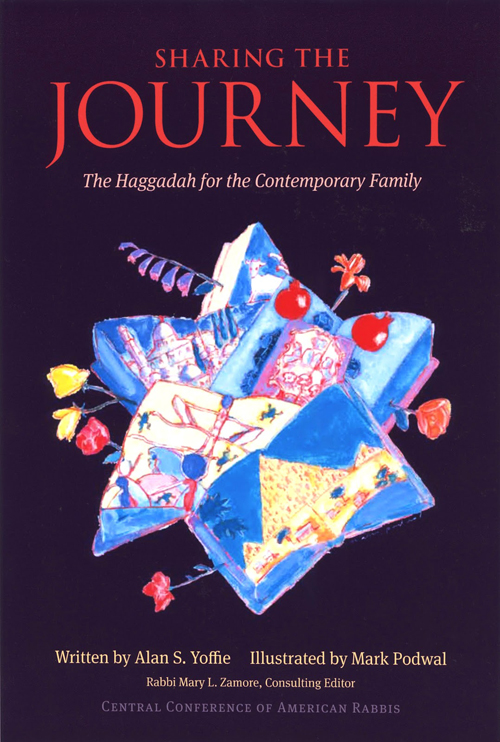 The new Reform Sharing the Journey: The Haggadah for the Contemporary Family is accessible, inclusive and helpful.

The CCAR, the rabbinic body of the Reform movement, has just published Sharing the Journey: The Haggadah for the Contemporary Family, written by Alan S. Yoffie with illustrations by Mark Podwal. The foreward, written by Paula Brody, preface and acknowledgments all make clear that this Haggadah is written with intermarried couples and extended interfaith families in mind, including those who are attending a seder for the first time.

The first section of the this Haggadah, A Passover Checklist, is a dictionary and “how to” in one. Taking the reader through the traditional elements of a seder, from the seder plate and its components, setting the Passover table, and other symbolic items like a pillow for reclining, items are defined and explained with emphasis on where they fit into the seder. Newer ritual items are also included in this helpful section — an orange (representing gay and lesbian inclusion in the Jewish community) and a beet (a vegetarian, “bloody” substitute for the shank bone on the seder plate) — though the list stops there (no artichoke, kiwi or olive). It also includes an overview of cleaning and getting rid of chometz (leavened food prohibited on Passover) in advance of the holiday, gives tips for the leader(s) of the seder, and discussion suggestions.

The rest of the Haggadah, for use at the seder, is mostly written in English, using accessible language and non-gendered wording (four children instead of four sons, for example). Where Hebrew is included (blessings, songs), English transliteration is also provided. For those unfamiliar with a seder or Haggadah, explanations included in the text will seem naturally woven into the telling of the Exodus story.

Remembering that the “contemporary Jewish family may include those who were born Jewish, those who have chosen to be Jewish, and family members of other faiths” (page xiii), attention is giving to the “we” moments. One I particularly liked came from the end of the seder, the customary “next year in Jerusalem!”

Jerusalem has symbolically been at the spiritual center of the lives of Jews, Christians, and Muslims for millennia. Each year our Passover seder renews our hope for the future, Tonight, we once again affirm our commitment to partner with God and join with one another to help repair the world.

Just as it starts with an acknowledgement that those at the Passover table may represent faiths other than Judaism, it ends on a similar note. 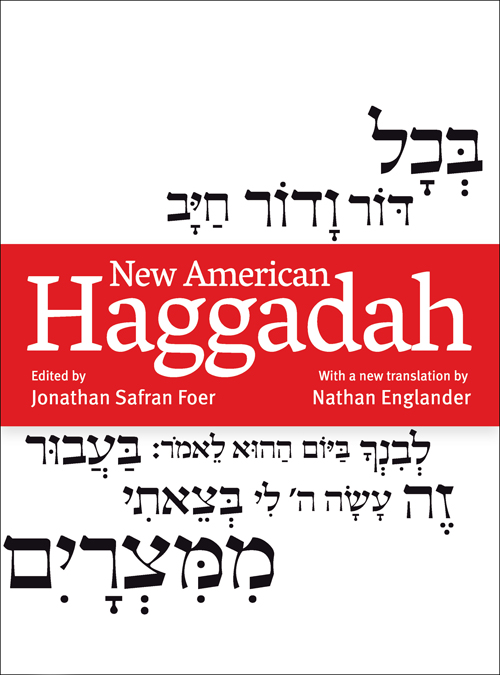 The New American Haggadah has had a lot of hype. Edited by Jonathan Safran Foer, with new translations by Nathan Englander, it also features commentary Nathaniel Deutsch, Jeffrey Goldberg, Rebecca Newberger Goldstein, and Lemony Snicket, with each providing content of interest to different types of readers. Deutsch, an academic, represents the “House of Study”; Goldberg, known for his reporting on the Middle East, is the “Nation”; Goldstein, a novelist who has won numerous awards, is the “Library”; and Lemony Snicket, author of several books for children, and pen name of Daniel Handler, is “Playground.” Throughout the Haggadah, these four themes show up as essays, commentary, extra (and often radically different) interpretations of the themes and rituals of the Passover seder. Between the four commentators, they not only represent different audiences, but different levels of religious observance, political views, and life views. These comments will certainly add to the discussions and questions at the Passover table.

The new translation, promising an updated English using current idioms, does not employ non-gendered wording that I have come to expect. Instead, readers will find plenty of He, His, Him throughout the pages when referencing God; the four children are the four sons; and our ancestors are our forefathers. Aside from the commentary, the text of this Haggadah is offered completely in English with Hebrew translation — or, if you prefer, completely in Hebrew with English translation. In other words, those at the Passover seder can choose whether to read from the English or Hebrew. However, no transliteration is provided.

While more “traditional” in tone, hints and choreography are noted in the margins, so that the reader will know when to lift their wine glass, when to dip their finger to spill drops, when a blessing is only said at the first or second night’s seder, or when it’s time to eat.

Running across the top of each page is a timeline, credited to Mia Sara Bruch. Given that it doesn’t always relate to the content of the page (it starts circa 1200-1250 BCE with a document, discovered by archaeologists, reporting that “slaves have escaped from a palace at Pi-Ramesses into the Sinai,” and ends, 145 pages later, in the year 2007, when the “first Haggadah designed for Jewish Buddhists” was published), it’s an interesting addition for those wanting additional facts or distractions as the seder progresses. It could be an interesting activity, for example, to ask those at your seder how the four questions, on page 21, relate to the timeline atop its page referencing Samaritan religion.

And a little feature that I know many of us will enjoy is that, along with page numbers, there’s also a countdown to the end. (Because after a few glasses of wine, who wants to do the math, figuring out how many more pages we need to get through?)

My favorite Passover seder tradition is to provide a selection of different Haggadot for guests sitting at my table. Each one offers a slightly different spin, a different insight into the Exodus story, which helps foster lively and discussions. With their different approaches to the Passover holiday, both Sharing the Journey: The Haggadah for the Contemporary Family and New American Haggadah will have a place at the table this year.