The Temple Where I “Grew Up”

The other day I saw a rabbi I know post a YouTube link to one of my favorite versions of the prayer, Hashkiveinu. Hashkiveinu is one word in English but means, “Grant that we may lie down” in Hebrew. In Hebrew, prefixes and suffixes are attached to the word. It is a petitionary prayer to be able to lie down in peace at night and to return to renewed life the following day.

The link on Facebook to the video caught my eye for two reasons: As I said, I love this musical rendition of this prayer. Also, this rabbi serves the congregation where I grew up, Temple Shalom of Newton, MA.

What does it mean to grow up at a synagogue? For me, I had heard stories from my dad about how his parents were among the earliest members. My dad had his Bar Mitzvah at this synagogue. I was named as an infant there. The senior rabbi at the time, Murray I. Rothman, of blessed memory, got my family through a horrendous time when my mother was struck by a car crossing the street in front of our house. My little brother was 1, my middle brother was 3 and I was a kindergartner. My mother could not get up the stairs of our house for almost a year. She was bedridden on a couch in our den. My father somehow managed the three of us. Neighbors and family came to the rescue. And Rabbi Rothman came to that den every Friday afternoon with a challah and a Torah commentary and studied a little Torah with my mom. This kept her going spiritually and emotionally.

What does it mean to grow up at a synagogue? I knew the halls of that place. I knew the smells, the classrooms, the chapel, the sanctuary, the bathrooms, the youth lounge, the social hall—I knew the building. My confirmation class photograph is on the wall there. In fact, I sat in the Rabbi’s study on more than one occasion philosophizing about God and Judaism (true, I was into this stuff, even as a kid). I felt at home there. I slept there in a sleeping bag on the floor as a teenager at a “shul-in.” I remember the Temple Shalom sukkah in detail even though the last time I helped decorate one was at least 20 years ago. I can still feel the pride I felt praying with my family in the sanctuary on the High Holidays, wearing my new dress. I can see my brothers as I write this, quietly folding the flyers and tickets into origami to keep occupied during the services. 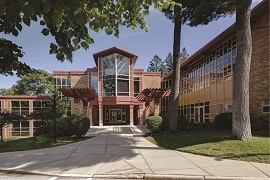 Some say bricks and mortar don’t matter. Buildings are passé. We’ve got coffee houses now. Millennials don’t want to walk into synagogues. Too many barriers. A building fund is too onerous for members to carry. What’s important are the people. The community. This is also true. But, I loved that building and it went through changes and renovations and has a life of its own. I think one reason I felt so connected to the building was that I could walk there from my house. That is how we got to and from Hebrew School. It is rare today for kids to walk places by themselves (at least not as young as we used to). I loved that independence, and going to a place I felt was totally safe and mine.

What does it mean to grow up at a synagogue? It means you know the people. We knew the people who worked in the office, the maintenance crew, the teachers, the educators and the rabbis. These were the people who lived in the temple as far as I was concerned. They were the familiar faces who knew us by name. They were welcoming and warm. They kept the temple going. And, my friends were there. We came together from multiple public schools. We grew up there together. We came to one another’s Bar and Bat Mitzvah services. We had our parties in the synagogue social hall. My parents knew the other parents and the kids.

I learned to read Hebrew there. I may not have known how to translate each word into English but I learned to read the Hebrew prayers in Hebrew fluently by about fifth grade. I kept the old blue Gates of Prayer Book—the Reform Movement’s prayer book—on my nightstand growing up, which I received from Temple Shalom. A nameplate was placed in it for me at my Bat Mitzvah. I read the prayers to myself at night and they were a source of comfort.

My parents have now moved to Philadelphia to be near my little brother’s family. We have no ties to this building anymore. We don’t know many people who still go there. Yet, all these years later, when I see a Facebook post from Temple Shalom, it catches my eye. It makes me smile to see the new life that is there now. It is a part of me.

I marry lots of people who “grew up at an area congregation” but they left after their Bar or Bat Mitzvah. Maybe they have great and deep memories of being there. Maybe they barely remember their time there.

Look through our listings for congregations that explicitly welcome interfaith couples and families!