Red and Green Latkes for Hanukkah at Christmas

Some years Hanukkah and Christmas overlap—not only do they overlap this year (2016), but the first night of Hanukkah falls on Christmas Eve! To have a little fun with this intersection of holidays, I made two non-traditional versions of a classic Hanukkah mainstay: latkes. Red and green latkes, to be precise. The red latkes are made from beets and the green latkes are made from broccoli. Italian cooks like to add a little Parmesan to their frittelle di broccoli (broccoli fritters). I left mine plain with just a little ricotta, but feel free to add some Parmesan for an Italian flair.

The beet latkes are like the “rich man’s latkes” from my mother’s cookbook since they don’t have anything added like flour to make them heartier. They’re more delicate than the broccoli latkes and are almost lacy when cooked. The broccoli has more moisture, so I added extra flour and some ricotta to make them a bit fluffier. 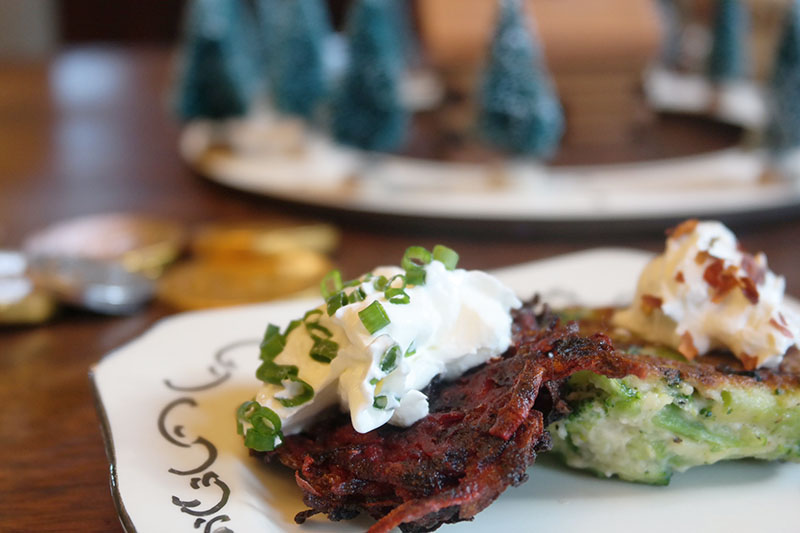 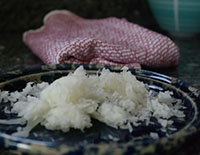 1.  Fill a medium-sized pot with water and salt to blanch the broccoli. Trim the stalk of the broccoli by cutting off the rough end and peeling the rest. Then slice the broccoli into large “trees.” Add the broccoli to the boiling water for 2 minutes. While it blanches, prepare a bowl of ice and water to shock the broccoli after removing from pot. Drain and set aside to cool.

2.  Grate the onions and squeeze them in a kitchen towel to get as much of the onion juice out as possible. Discard juice.

3.  Peel and grate the beets on the large-grate side of a box grater. Squeeze them in a paper towel (unless you don’t mind staining a cloth towel) and discard the juice.

4.  Mix the grated beets, 2 eggs and half of the grated onions in a bowl. Season with ½ tsp. salt and about ¼ tsp. pepper. Set aside.

5.  Cut the broccoli stalks down all the way to the very top of the florets so you have tiny florets and stalks. Break the florets up into a bowl (like crumbling feta cheese with your fingers). Grate the stalks on the box grater and add them to the florets.

7.  Mix in flour, ricotta, one egg, the rest of the grated onion and the remaining ½ tsp. salt and ¼ tsp pepper. Set aside. 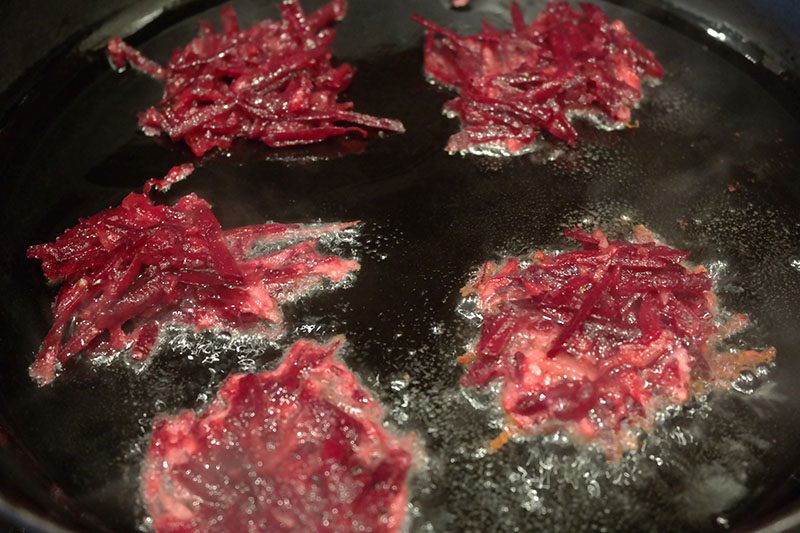 8.  In a hot frying pan, add 2 Tbsp.vegetable or grapeseed oil and heat over medium-high heat. Take a spoonful of the beet mixture (it will be very delicate), squeeze it slightly and lay it into the pan to fry. Don’t move the beet latkes when placed in the pan until they begin to brown a little around the edges, about 3-5 minutes. Once they begin to darken (if you’re not sure, you can peek underneath after a few minutes), flip and cook on the other side 3-5 minutes.

9.  While the beet latkes are frying, prepare a plate with paper towels to drain the latkes. Once you’ve fried all the beet latkes, use a paper towel to carefully wipe out the oil (turn off the heat). Then add remaining 2 Tbsp. oil and fry the broccoli latkes, following the same method.

Serve with sour cream or apple sauce (or both!). 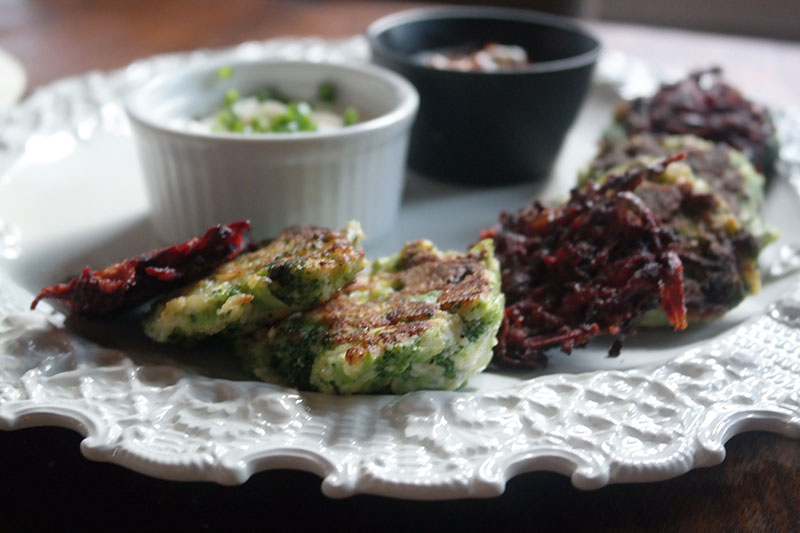 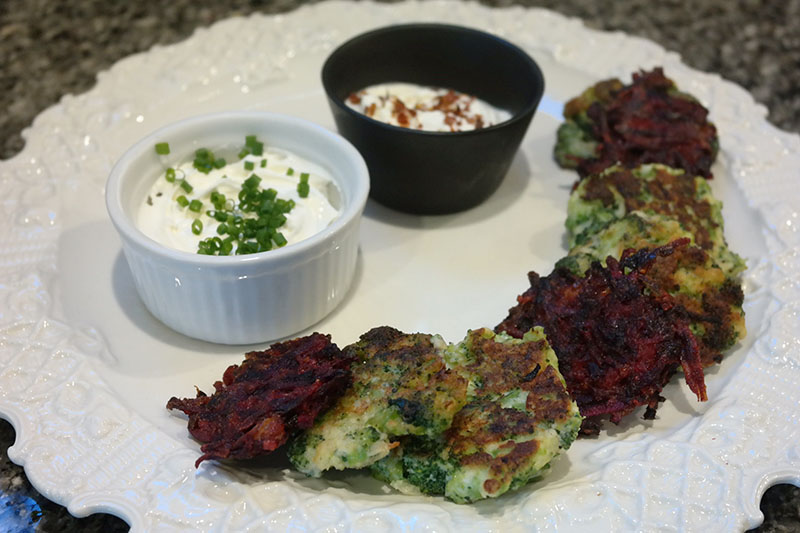