These are basically an amped up version of the classic latkes that I typically make and they are sooo good. Flavor-wise, I’ve added garlic and scallions (to an already onion-y mixture). Texture-wise, I’ve replaced my standard flour binder with Panko breadcrumbs for a thicker heartier texture. I find it helps these latkes fry up more like hockey pucks, which is a good thing because we live in hockey country. I supposed you could also use matzo meal!

Let’s review some tips for prepping them ahead if you’re planning on hosting a big party this year:

For the most low maintenance route, follow the below directions but instead of transferring to a wire rack or paper towel as written, transfer the latkes in a single layer to a sheet pan covered in foil. Let cool and refrigerate for up to two days or freeze for up to a few weeks. The foil is so that they retain that excess oil and you want them to do that so that when you reheat them on that pan (in a hot oven, 400º or 425º should do), the excess oil lightly re-fries them.

For a slightly higher maintenance route, follow the below directions as written, taking them out of the oil just before they get to be optimum goldenness. Let cool and refrigerate for up to two days. And then when you’re ready to serve, simply fry them again. they’ll fry up faster and they’ll be super crispy because twice fried latkes are a very good thing.

The sour cream can be made a day in advance. 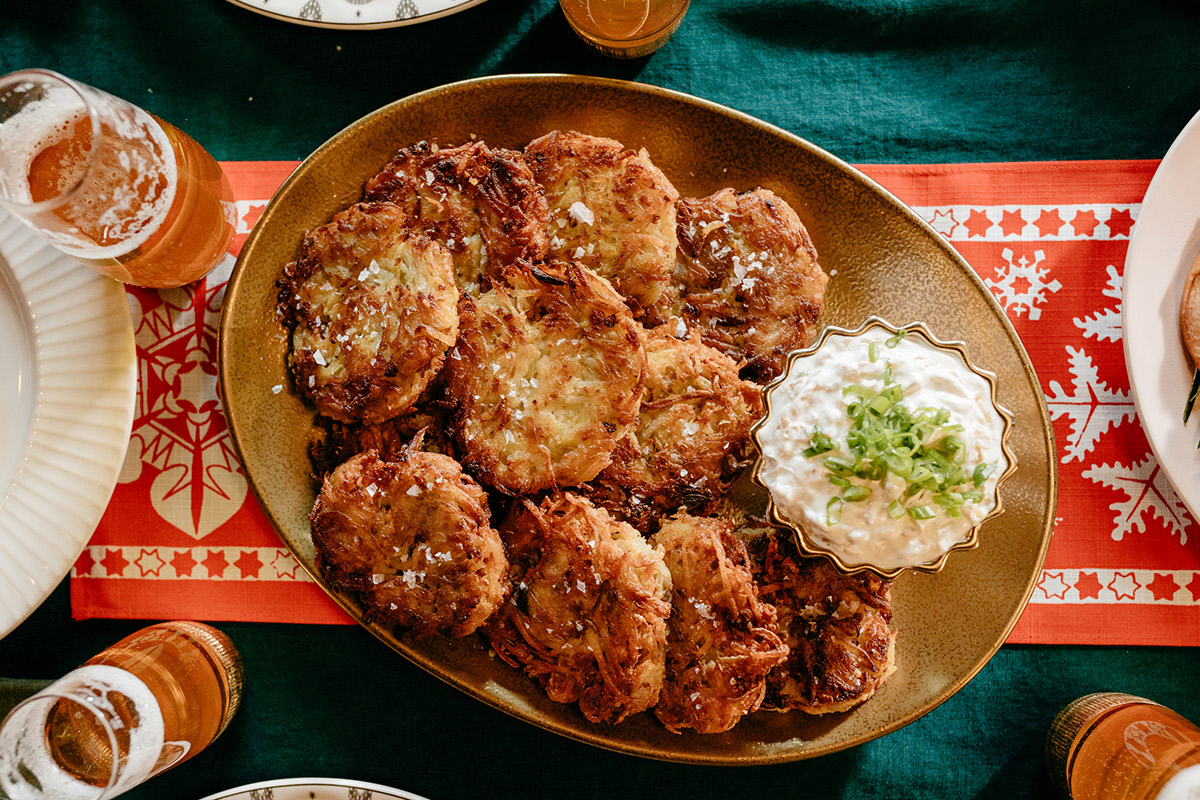 For the caramelized onion sour cream:

1. Heat the oil in a large skillet over medium heat and add the onion, sugar and 1/4 teaspoon of the salt. Cook, stirring, until the onions are golden brown and caramelized, 30 to 40 minutes. Add the garlic and cook for 2 more minutes. Let cool.

2. Mix together the onion mixture, sour cream, onion powder, a few turns of black pepper and remaining 1/4 teaspoon salt. Taste and adjust the seasoning as desired. Cover and refrigerate until ready to serve.

For the potato latkes:

1. Meanwhile, using the shredding attachment on a food processor (or mandoline), shred the potatoes, onions and garlic. Line a colander with 2 layers of cheesecloth and set it over a bowl or in the sink. Add the shredded mixture to the cheesecloth and sprinkle with the kosher salt. Let sit for 30 to 45 minutes.

2. Gather up the edges of the cheesecloth and use your hands to squeeze out any excess moisture.

3. In a large bowl, mix together the breadcrumbs, lemon juice, eggs, a few turns of black pepper and the potato mixture. Stir in the scallions.

4. In a large skillet, heat 1/4 inch of oil over medium-high heat until shimmering; it’s ready when a strand of potato added to the oil immediately starts to sizzle. Use a 1/2-cup ice cream scoop to add compact scoops of the mixture to the oil, spacing them out so as not to crowd the pan. Press the scoops down lightly with a spatula to get 1/2-inch-thick patties. Fry until golden brown on both sides, a few minutes per side. Transfer to a wire rack or paper towels and sprinkle with flaky or kosher salt. Repeat with the remaining mixture, adding more oil to the pan as needed between batches.

5. Sprinkle the caramelized onion sour cream with chopped scallions and serve with the warm latkes.

Molly Yeh is an award-winner food blogger and cookbook author. Her show Girl Meets Farm is in its 4th season on the Food Network.

How to Talk About Christmas Trees in an Interfaith Relationship

How to Talk to Your Kids About Not Celebrating Christmas