This potato and pumpkin kugel is perfect for the High Holy Days!

Potato kugel is always a hit at holiday meals. Traditionalists enjoy simple potato kugel like their grandmothers used to make, but even so there are debates about whether the kugel should be crunchy and light or soft and compressed. This particular version has a pumpkin custard-like topping and is a mix of sweet and savory. You end up with a little crunch around the edges and a soft filling in the middle. It also lends itself to experimentation—add cumin or za’atar for Middle Eastern flavors, or turmeric or garam masala for an Indian-inspired version. 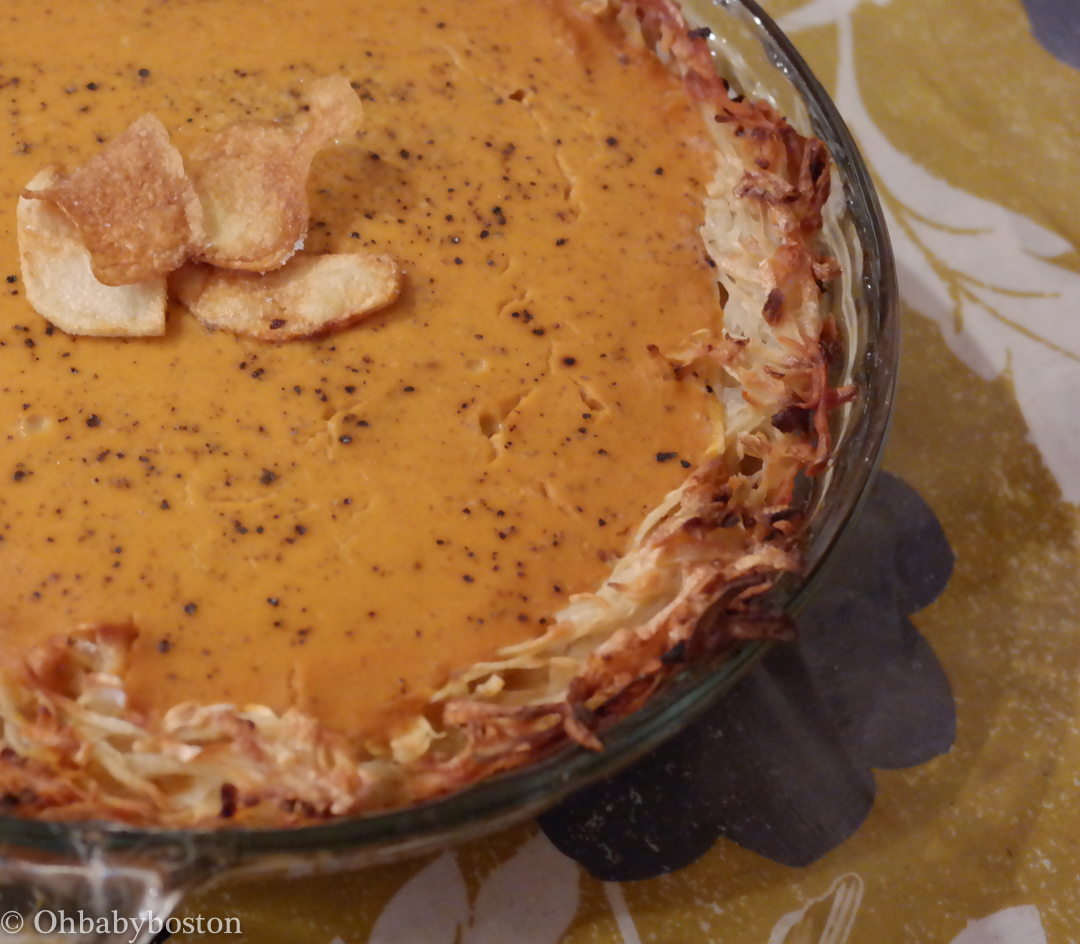 2. Peel onion and potatoes and coarsely grate with a box grater over a clean kitchen towel. (Here, I used 3 small potatoes as one large potato.) 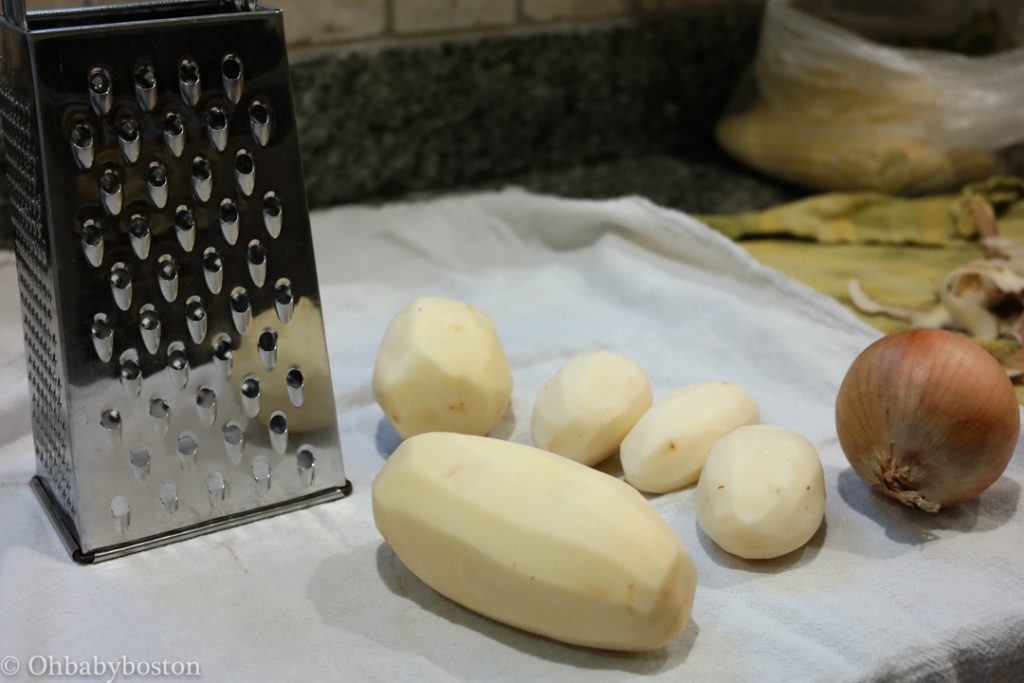 3. Over the sink or a bowl, squeeze the towel of grated mixture as hard as you can to extract as much liquid as possible. 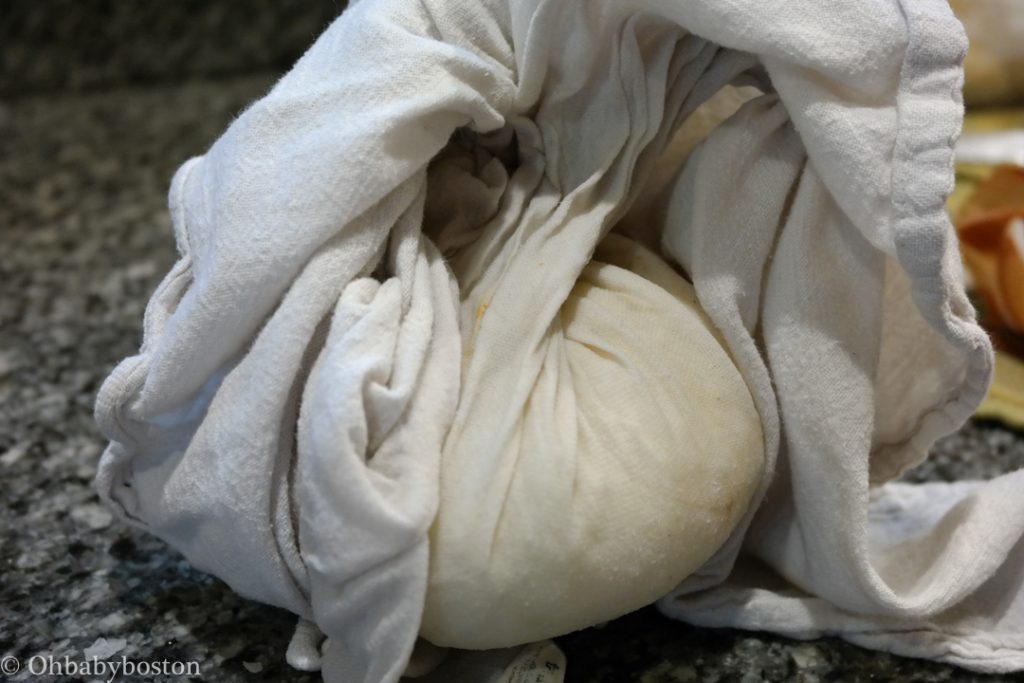 5. Add onion and potato mixture to a bowl. Sprinkle with starch, salt and ½ tsp. pepper.

6. Make a well in the middle of the mixture and crack one egg into it. Beat the egg with a fork and mix well. 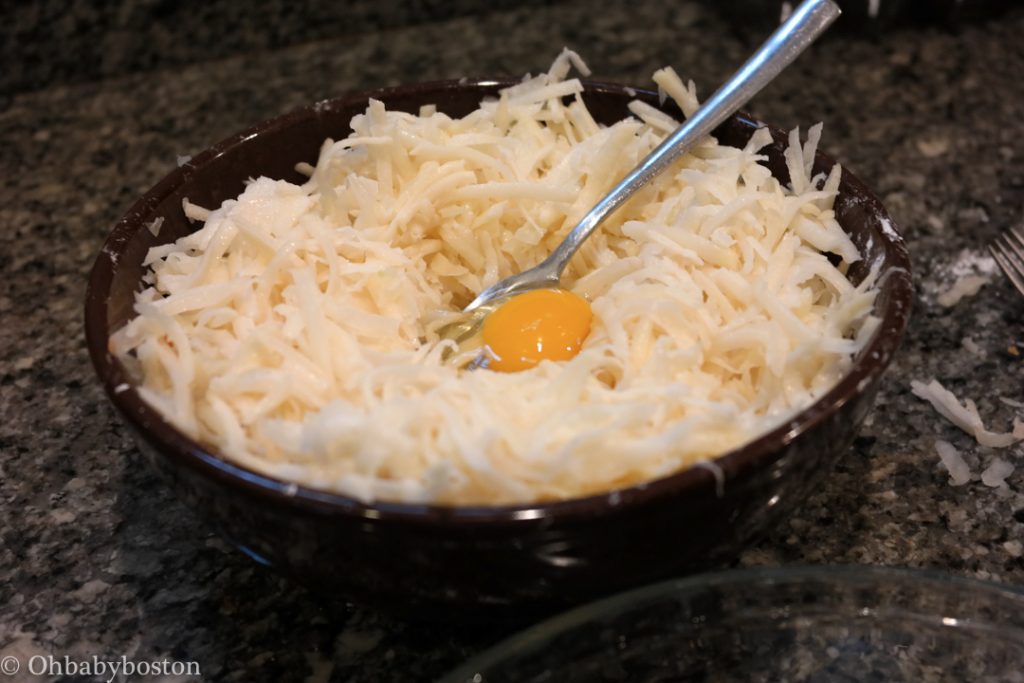 7. Remove the pie plate from the oven, scooping out ½ Tbsp. hot oil. Set aside.

8. With a fork, add the potato mixture to the pie plate. Build up the sides of the pie plate to form a crust. (If you like lots of crunchy potato, make your sides wide.) Drizzle remaining hot oil on top. 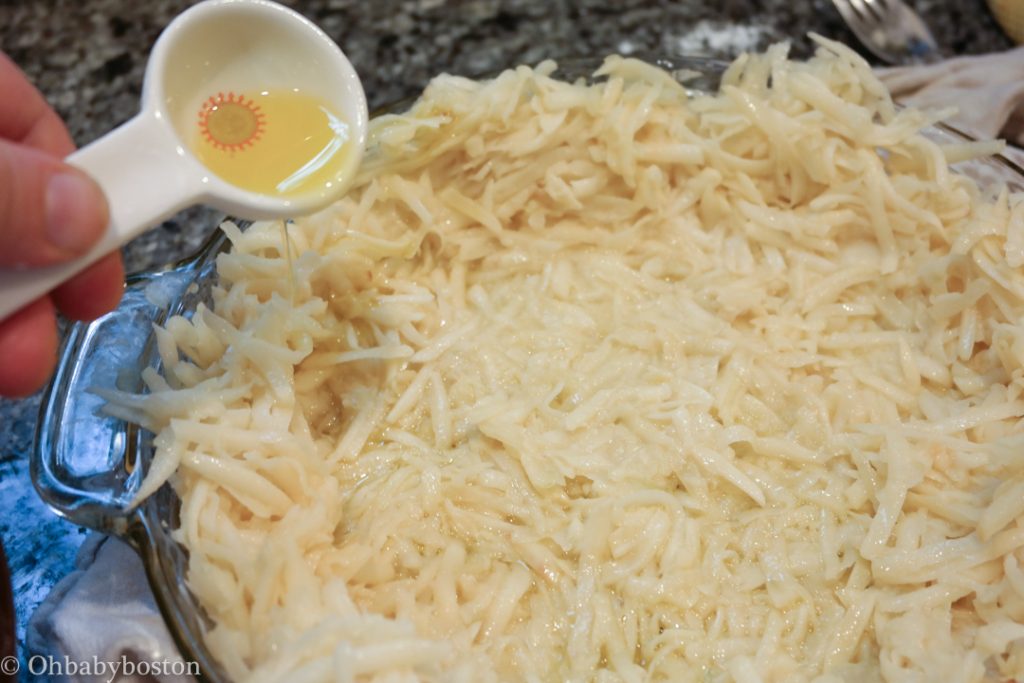 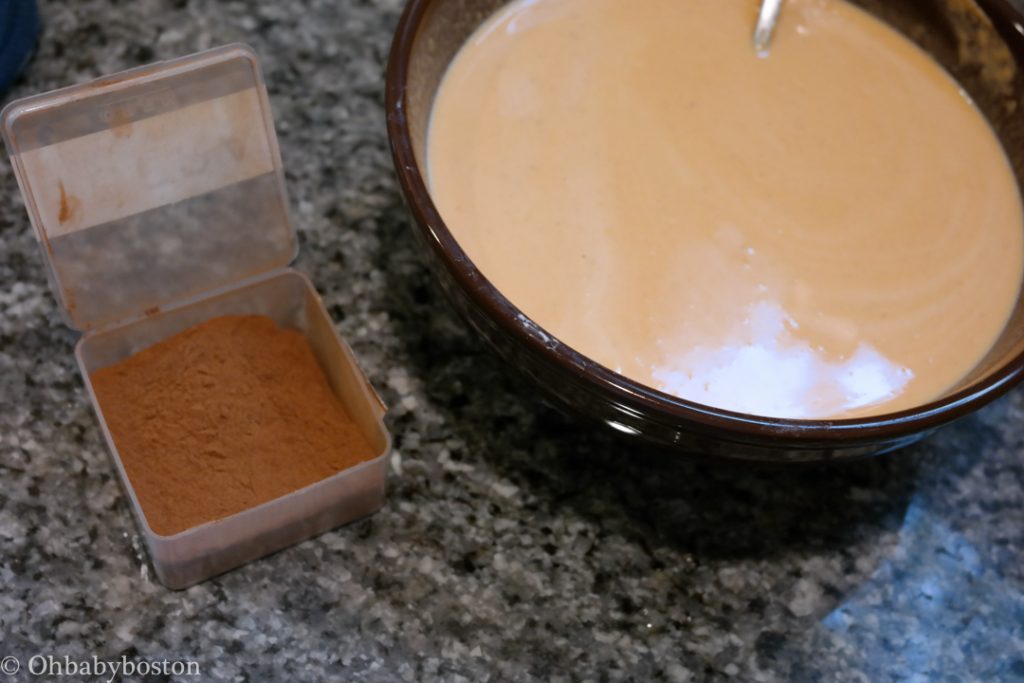 11. With a measuring cup or ladle, pour pumpkin mixture into potato pie until it reaches the top of the potato edges. (Any extra mixture can be used to make sweet pumpkin flan!) 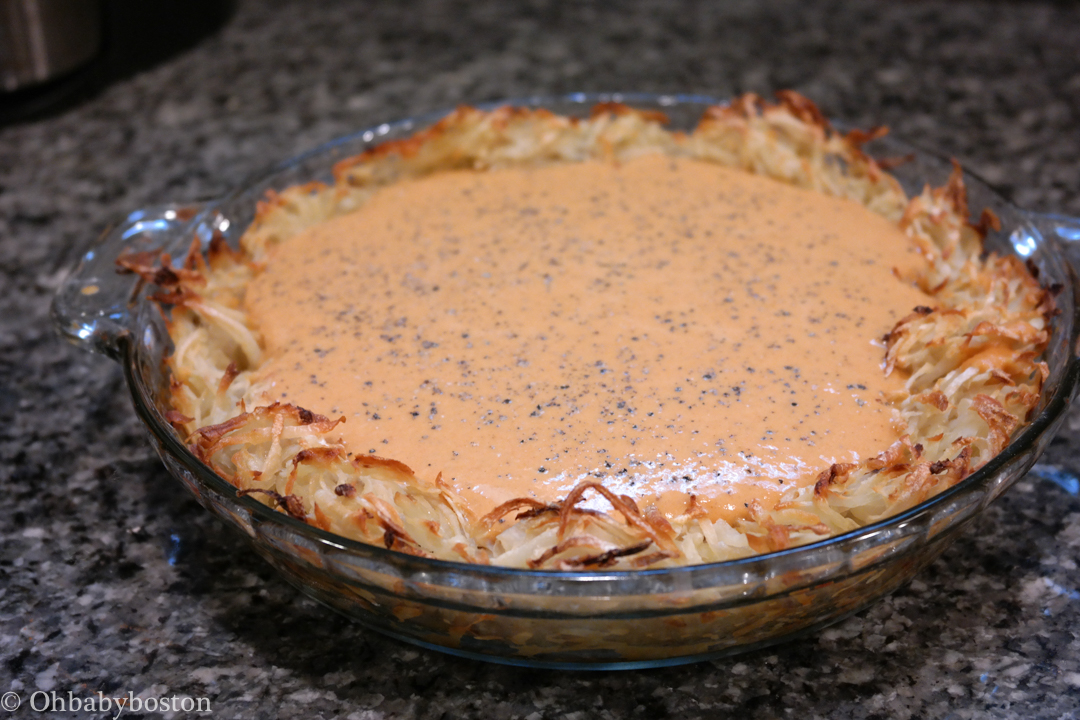 12. Add remaining ½ tsp. pepper and additional spice, if using, to pumpkin mixture, stirring lightly with a fork to prevent overflow.

13. Bake at 350 degrees for 30 minutes. If the edges begin to get too dark, cover with foil; the moisture from the pumpkin should help it stay crisp.

15. After removing kugel from oven, let cool slightly and serve with sour cream. 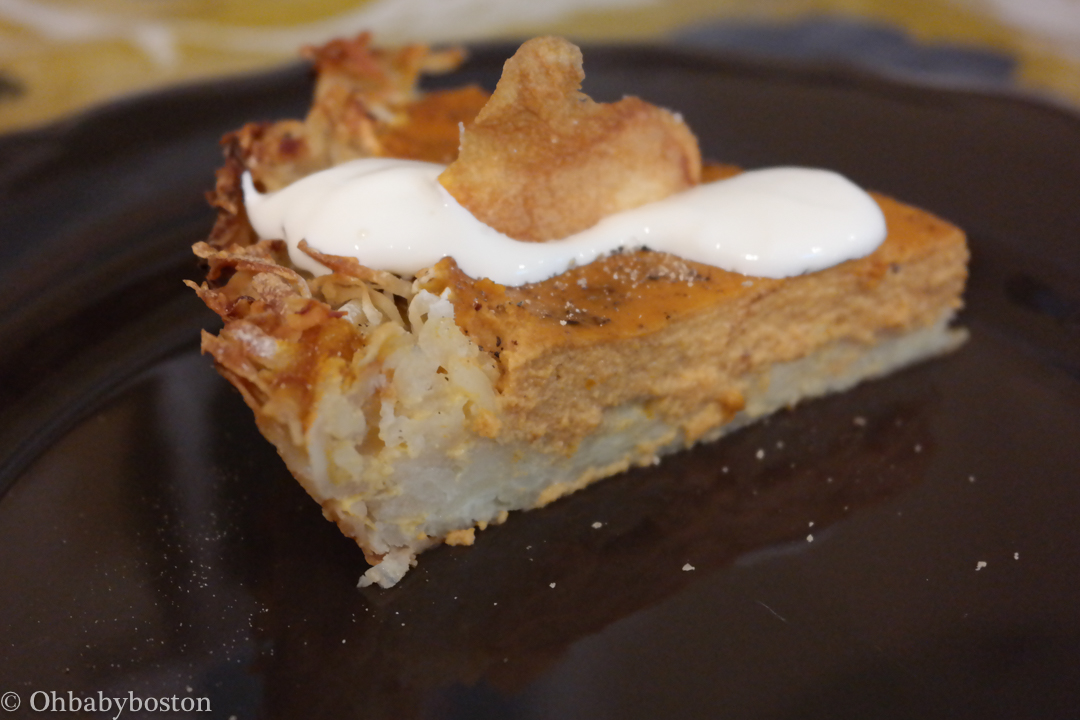